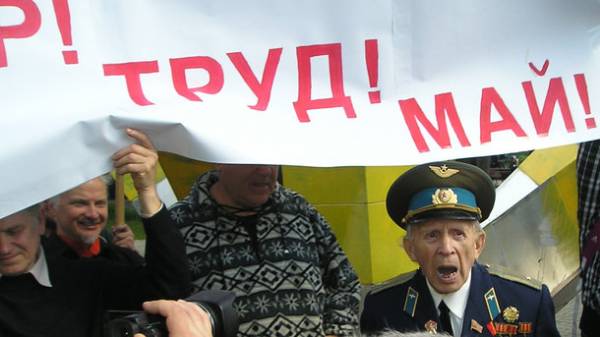 Demonstration in honor of may 1, passed today not all cities of Ukraine. So, in Nikolaev any meetings forbade local authorities. About a thousand people gathered in Kiev – here activists under the red flags and drums marched through the city centre. At the same time in the winery for the townspeople, most of whom are pensioners, were attacked by young men in masks: the seniors fought back with cries of “our beat”. The website “Today” has found how the first of may celebrated in different cities of the country.

Kiev with posters held on Khreshchatyk in the direction of European square. The head of the column marched a band of drummers. Order during the event was guarded by about 200 police officers and several police patrol cars. 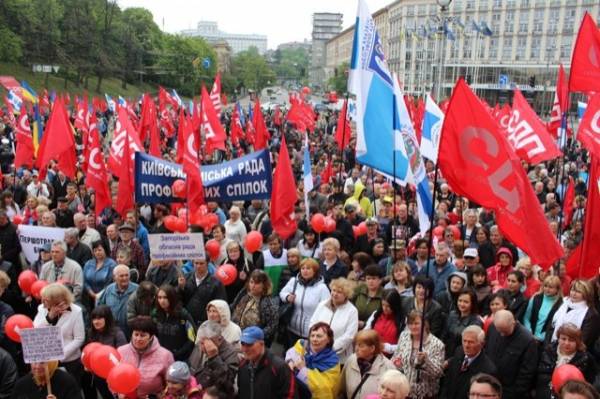 Representatives of trade unions demanded during a rally to renew the right of working on sanitary-resort treatment, children’s health and to liquidate debt on a salary. “The government should move to the side of the workers and make the five steps: ensuring the constitutional right to receive timely payment of wages and to eliminate the debt on it, to provide new employment policy, to continue to reform the wage. And required to develop a National strategy of reforming labour safety , and to restore the social right to health resort treatment, children’s health improvement etc,” said Chairman of the Kyiv city Council of trade unions Valentine Miller. The action took place without incidents. After several hours, the activists dispersed.

Vinnitsa: pensioners were attacked by young men in masks. In the winery may day event was not without provocation. So, according to local police, on the European square were dozens of people with flowers. The majority of them – pensioners. At a rally shouting “Komunyaki on gillyaku” were attacked by young men in masks. Retired with cries of “Our beat” with the canes fought back from bullies. Activists and protesters were separated by police.

“About 20 young people who did not share the political views of the protesters tried to prevent the event and tried to snatch from the hands of the flags. A conflict situation was quickly stopped by police who pushed the crowd of guys and forced to leave the territory of the meeting”, – stated in the message.

No one was hurt. According to law enforcers, the police found out the identity of activists, the event information is brought in ERDR.

In Kharkov blocked the monument. In Kharkov the rally gathered several hundred people, informs local edition of stud.media. The participants chanted the slogans “Peace! Work! May!” and “Glory to Labor”. Also in attendance were posters against NATO. Immediately after the start of the procession there was a conflict between Pro-Ukrainian activist and participant in the demonstrations: Pro-Ukrainian activist tore a poster of one of the protesters, a fight broke out. 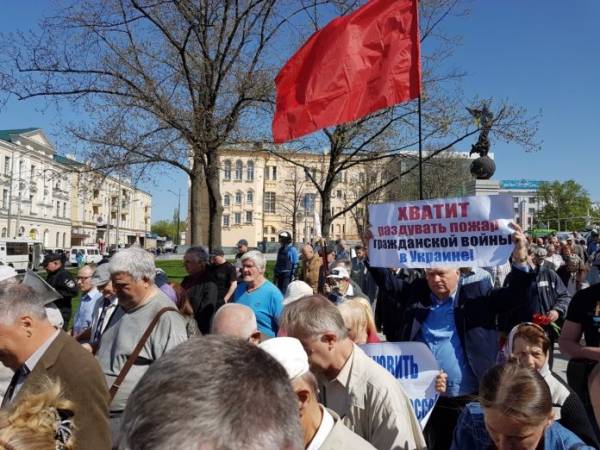 The first monument in Kharkiv may day Pro-Ukrainian activists blocked the first passage to the monument, but later allowed the protesters to lay flowers, provided that this is done under the national flag.

In Kherson was not without casualties. The collision occurred in the Park of Glory near the Drama theatre. Left Alliance, all-Ukrainian Union “women For the future of children of Ukraine” has conducted a concerted campaign in honor of may day. They were opposed by the Right sector, the Kherson self-defense and fighters of the ATO.

Just a demonstration to-Day the workers gathered about 50 people. According to media reports, is now known about one affected the outcome of the fights.

Also, a clash occurred in the river. When the demonstration of the trade unions stopped in the square near the city Council to listen to a speech by one of the organizers, she overtook the convoy with flags of the socialists. Union protesters tried to hand the socialists cards, but men of athletic appearance and denied doing it. The fracas began, which quickly separated by police.

The procession on the occasion of the First of may passed and the occupied Donetsk. Donetsk residents complain that early in the morning blocked the city center, is a disruption of normal movement of passenger transport. Traditionally, as in previous years, columns of people moved from the library. Krupskaya at the square. Lenin and the length of this route is about 700 meters. On the area of the promised day rally. The main slogan of the March – “In unity is our strength”.

It is noticeable that the procession passes under the “auspices” of trade unions of enterprises, which were responsible for the presence of people in the procession on 1 may. “The mines are. Sent everyone home in a vacation for 10 days at least. For that live said. But the parades go by!” – outraged resident of the city of Constantine.

By the way, at the same time in Nikolaev today banned holding of mass events. According to Governor Alexey Savchenko , in connection with the introduction in the field of prevention of terrorist acts on the territory of the region had set up checkpoints. In dozens of cities campaign to may day passed without incident.

Note, International workers ‘ day is celebrated in 143 countries. The movement originated in the United States, and the largest event began in 1886 in Chicago.