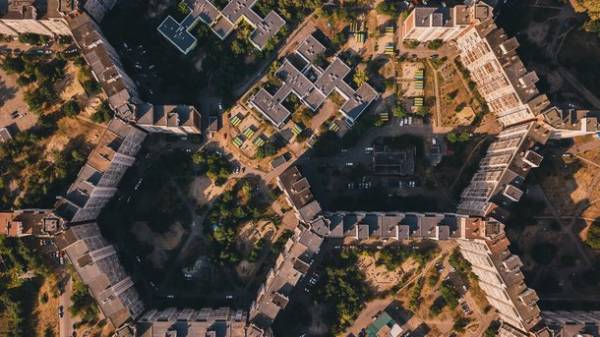 “Today,” found in the capital a few unusual houses. They are no different architectural delights or artsy decor, but still amaze with his incredible length. For example, to work around the giant house on the street Zabolotnogo, you need to spend almost an hour, and on River you can “get lost” among the entrances.

The long house, built in Kiev in the pre-war period, is located in Pechersk on the street, 7/14. The five-storey building, in which as many as 21 the entrance, but only 177 apartments, occupies almost the entire odd side of the street. From different sides of the 430-meter house extend the house next door, “glued” close: house No. 12 on P. orlyka street, No. 5 and 3 on the street and №29 on the street Shelkovichnaya. It was built in 1934-1935 by the architect George Lubchenco and was intended for the NKVD.

The grey brick has a status of architectural monument and protected by law, which is indicated by a commemorative plaque near the third entrance. By the way, the front here “through” the entrance is from the street, with a narrow yard. But go to most of the entrances are difficult: they are equipped with security locks, and many video cameras. Around the house — peace and quiet. Probably because there are placed the Office of state security and the Ministry of internal Affairs, and in order to help ensure the monument of the favourite characters of the film “meeting Place cannot be changed” Gleb Iglove and Volodya Sharapova.

Apartment in an old house are large. Kopeck piece with an area of 81 square meters, without repair, can be bought for 5 million UAH. For a two-bedroom 110 square meters and even a fireplace begging for more 7 million UAH. 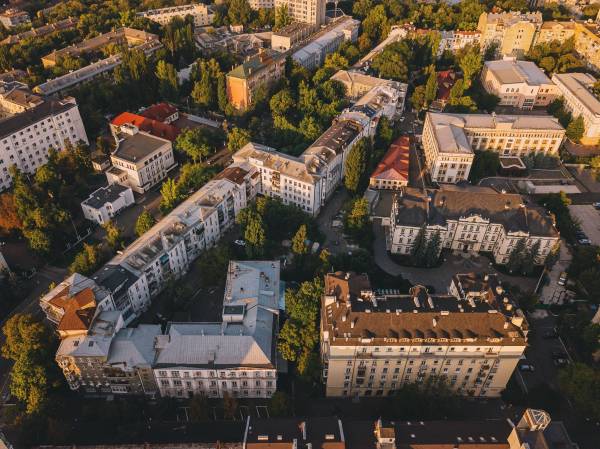 Near the interior Ministry. In the long house of the prewar period on the street, many apartments are sold

“SNAKE” IN THE DNIEPER RIVER: A TANGLED NUMBERING, ARTISTS AND MOVIE

Can there be a unique panel of Soviet skyscraper? The people of Kiev will say: “They all look the same”. But, no! The proof is a residential house on the street Riverine, 5, Obolonskyi district. At first glance, unremarkable 9-storey building, located near the Dnieper and Svyato-Pokrovsky Cathedral, is the long building with the same address available in Kiev. The length of the house is about 560 meters. If you look at the map or to assess the building from a bird’s flight, it resembles a long snake, winding in several places (the building consists of four parts, between which made the breaks for driveways). The house, built in 1980, very odd. First, it has 25 entrances, but one of them, located between the two arches, a fully non! There are workshops Necause of artists of Ukraine. Creative people can be seen from afar: the entrance to the building, unlike the others, brightly painted, multi-colored “spot” can also be seen on the facade and the window of the top floor.

“Please note that the house — 9 floors, and in “boxes” that connect its parts, at 6-7. Here the space is more, the ceilings higher. For creativity it is very convenient,” — explained in the workshops. By the way, despite the fact that “art” staircase — part of one huge house, his sometimes indicate under a separate address: prirechnaya, 5M.

Impressive, but a bit confusing local numbering of the entrances. For example, No. 1 is in the middle of the house. Next to him from different sides — front No. 2… and No. 7. After No. 7 is No. 11, and then in descending order to # 8. Here and dizzy. With apartments it is not easier: according to Information-analytical system “Your house”, Kyiv city state administration, the house on River, 5, — 828 residential apartments. And at the same time on the main entrance doors latest stated that there are apartment numbers 838-866. While walking near the house we noticed that the locals like to decorate the local area soft toys: at the entrances of the dog, gorilla, mascots of Euro 2012 Slavik and Slavko, and one of the trees you can see a Panda. And here is some tenants are reluctant to pay for the “communal”: at the entrances, we noticed ads with lists of debtors that are afraid of the fines and the courts.

By the way, this house boasts and the fact that “lit up” in the movie, however long ago. He, like the adjacent building on the street Heroes of Stalingrad, 26, glimpsed in the frames of the Soviet film “Raspad” about the accident at the Chernobyl nuclear power plant, which starred Aleksey Gorbunov and Alexei Serebryakov. Obolon, quite deserted during the filming of 1989-1990, the scenario turned into a city of power Pripyat. 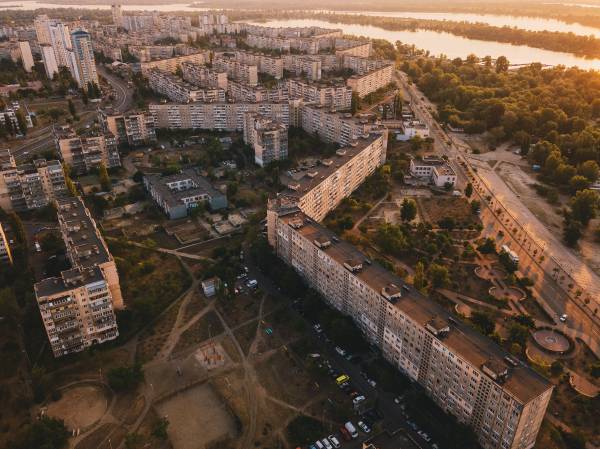 Riverine. In one of the entrances of the house is not apartments, occupied by artists ‘ studios

“HAMMER” OR “POLOCROSSE” IN THE METRO

Amazing 12-story half a kilometer of the house you can find near the metro station “Darnitsa” in the Dnieper area. He built as an experiment in 1974-1975 in the form of a huge semicircle, for which he earned the national nickname “polocrosse” and “the great wall of China”.

In the house more than a thousand apartments. And at the same time the four-digit numbers here is not found. The fact that the building was “glued” in two parts. Eight entrances “legally” located in Darnitskiy Boulevard, 7, and 16 on Deputatskaya str., 3. The numbering of the two halves starts from the middle, from “arch”. On both sides, hanging house signs with arrows. Interestingly, the inhabitants of the Darnitsky Boulevard, 7, go to your entrances from the street, and residents Malyshko street from the yard.

“Polocrosse” — record the number of lifts, there are as many as 48. And stairwells — remote: not located inside the house, a rectangular “tubes” outside the building (one of them is beautifully entwined with vines almost to the height of the tenth floor). The semicircular shape of the house affected the apartments in the living room there are acute and obtuse angles. A few inches, as spoken can vary and the height of the ceiling in one room, but it is especially not interfere.

There is also another impressive feature of “Chinese walls”. The house is served by several municipal organizations. Some entrances belong to the city housing Department, the rest divided between the seven different housing and construction cooperatives. Local residents say that the quality of services varies considerably.

“Our entrance refers to the housing office, he’s in bad shape, the repair was never made. Even if the mayor Omelchenko to the entrance was attached to the premises for the Concierge, but the Concierge we have ever had. Other more order” — complains a resident of the Nadezhda Matveevna. According to her, the house was built and inhabited sections, and therefore the rulers have different entrances.

Old-timers say that when the house was built, near a forest, and the Park “Victory” — the swamp!

About the unusual semi-circular shape at home there are different opinions. Some explain that the building serves as a “shield” from wind array. Announced to us by a local resident and another version. “From a great height our house is vaguely reminiscent of the famous sickle emblem of the Soviet Union”, — says Nadezhda Matveevna. Residents are proud of the fact that in one of the entrances of a house on meadow St, lived the famous actor Sergei Ivanov, whom the people of Kiev are grateful for the wonderful roles of a Grasshopper from the movie “go To fight some “old” and Lariosik of days of the Turbins. Now living here with his wife and daughter. 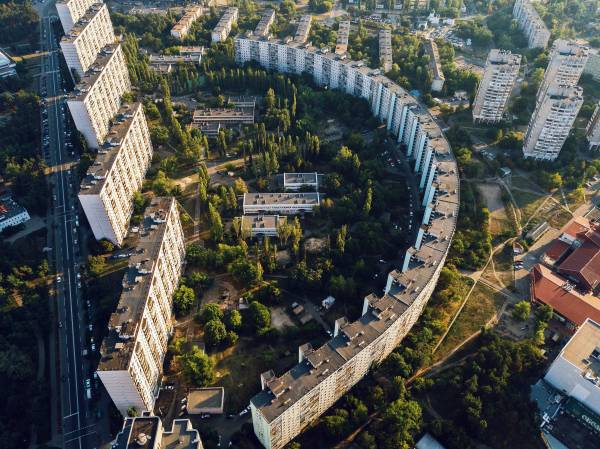 Unusual. The house consists of two addresses, and for the procedure being followed here 8 different organizations

“THE BEE HOUSE”: THE MEMORY OF THE VICTIMS AND YARD-HONEYCOMB

The array towers-1 is also unusual in architectural terms. On Zabolotnogo str., 2-122, is a giant multi-section residential complex: it consists of 61 buildings of various heights (from 12 to 21 floors) connected with each other. An amazing feature of the house can only be assessed from the height: from the top becomes visible a hidden pattern is the shape of the building resembles a giant honeycomb. Distance from house No. 2 to No. 122 in a straight line is 850 metres away, and if you measure each “cell”, the length of the house over 2 km! In terms of population reminiscent of a real beehive. More than 4 thousand apartments. If you estimate that on average each home to two people, the total number of residents is comparable to the population of a large village near Kiev.

For the sake of experiment we decided to measure the time and bypass the “bee” house. The task, admittedly, was not easy. Walk at a fast pace took 45 minutes! Here, it seems that it’s the end. But around the corner opens new “honeycomb”, and behind it another, and another… of Course, the locals do not walk around, and know how to reduce the road through the many arches in houses. But still admit that at first, once settled, were constantly confused. Architect George Duhovichny explains:

“If the house is not built, then the minimum gap between their ends shall be 9 metres. In order not to lose money and area, the houses are attached. The only requirement for such entities, the required number of driveways and aisles, so I don’t have to pass kilometer distance. As for unusual shapes, making the house non-monotonic nobody forbids,” he says.

By the way, the house Zabolotny, 2-122, there are no odd numbers, only “paired”. “Odd looking Glushkov Ave, there is the same house, but slightly shorter,” advised local residents.

Yards the house is cozy, with playgrounds, fruit trees. In one of them we found the dovecote in the other… made people care about the memorial to the fallen on Maidan: waving the Ukrainian flag, portraits of heroes of “Heavenly hundred”, the logs burned in an iron barrel and helmets. 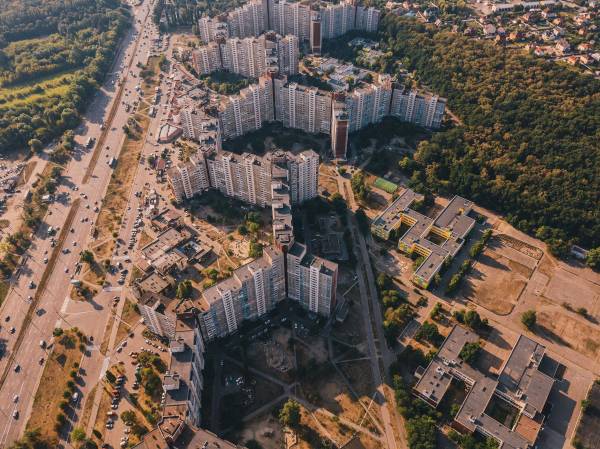 Huge. The building consists of 61 houses that are connected together 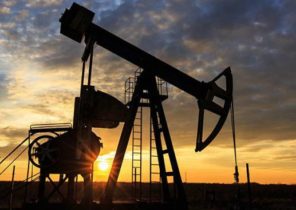 How to evaluate barrel?