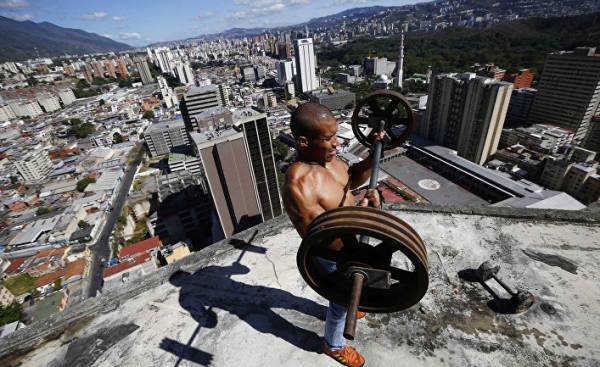 Venezuelans die, while the rest of Latin America laments about the lost of democracy. In this situation, you need to save not only the Venezuelan democracy but also of human life. It is necessary to ensure that thousands of patients died in the muddy beds of the hospitals, where there is nothing but saline and cockroaches.

Returned disease, which are associated with the times morow and underdevelopment: diphtheria, scabies, leprosy. However, the horrific news coming from day-to-day, not dazzling Latin American rulers. Let’s turn our attention to the depressing and painful outcome of the meeting of the presidents of the southern common market (MERCOSUR), held a few days ago.

The scale of the social crisis in which is immersed Venezuela, huge, tragic, and the crisis itself, apparently, insoluble. Already failed to resolve the political crisis and prevent the destruction of the democratic system. As it turned out, none of the Latin American organizations, which was considered as authoritative, failed to influence the policies of Maduro and his government. It is quite obvious that the inter-American democratic Charter is not working. At the moment of truth it showed its uselessness, what can be said about the UN Charter. Chapter VII of this document provides even the use of military force in members (blue helmets) in cases where the world or international security are threatened. This is an imperfect procedure, which often fails to apply, but it exists and helped to resolve serious global crises.

There is a famous saying “never threaten if you can’t carry out his threat”. If the verbal condemnation does not translate into concrete action, it’s worthless. Moreover, the one whose address is aimed at condemnation, understands that it can’t force to change position.

This is what is happening now. On the continent there are no tools and mechanisms that would allow it to operate effectively. Of course, you can impose economic sanctions, but they are unlikely to force Maduro to change its policy, rather hurt the population. On this basis, we should conclude (but, despite all the evidence, it never did): in Latin America there is no way to reverse or prevent the rise to power of undemocratic government. If tomorrow some of our countries there was a revolution, then we would not be able to prevent the strengthening of rebel positions. The only thing we have is the General opinion against such things. But, no matter how much we condemn, it is unlikely that will change. The deepening of the Venezuelan crisis violates the priorities: we are talking not about saving democracy, and the lives of Venezuelans who find themselves in the role of Guinea pigs large continental experiment called “socialism of the XXI century”.

President Macri has repeatedly said that Argentina must take on the role of leader in the region. Well, Mr. President, now this is the moment when decisions and recommendations are not obvious. Allow myself to offer him some considerations which are likely to contribute to the debate among those who take foreign policy decisions in our country.

First of all, was right to state in no uncertain terms (although it is not very nice for the diplomatic world of the Western hemisphere) that we have no effective ways of preventing dictatorships. You are an engineer and, I believe, a practical man: start with the destruction of the myth that we have created a mechanism to protect democracy. Show your colleagues (they know it) that it is only exercises in eloquence, and it was time to come up with something more useful or at least stop ranting in vain. Then examine the provision of humanitarian aid, think about how to use international humanitarian law, for example, through the international Committee of the red cross. Why presidents do not meet, not to meet with the UN Secretary-General, Antonio Guterres and not to discuss the methods of delivery of medical aid and medicines to Venezuela? The red cross is a permanent observer at the UN. Why not try to raise the issue in UN? But if Maduro refuses humanitarian assistance, so he declined the offer of the UN, not the Organization of American States. So, Mr. President, to help solve this drama is Your responsibility. Under threat is not freedom, and the life of Venezuelans.