16 January it became known that the artist Pyotr Pavlensky has left Russia together with his companion Oksana Shalygina and their two children, and intends to seek political asylum in France. We met with the international airport in Paris and found out the artist of the circumstances of his departure.

— What happened? Why you had to leave Russia?

— We have eliminated from Russia. We learned about it on December 14, when we returned from Warsaw. At Sheremetyevo airport, after passport control we were detained by people who identified themselves as operatives of the criminal investigation, and the police. After this we were taken to the Investigative Committee. There we learned what was going on.

And what happens is that our position on free relations, our position of disdain for the institution of marriage, family, fidelity tried to wrap and wrapped it up in criminal violence against the person.

They approached us for quite some time. When I was in prison, Oksana was contacted by the people — the various “well-wishers”, let us call them — offered help and support you gave some information. Then when I got out, they met, talked… for example, in the cafe, we sat, and they said, “You do such things, let something big out there… with the explosion and the seizure of the Kremlin. There are for weapon access, weapon not only in Rostov it is possible to get…”. I mean, it is clear that to repeat the fate of the so-called “Crimean terrorists” had no desire at all. So we have these things blocked, would not let them go. Just with these people interrupted all communication. Because what you appear to be a former COP or someone else is of no importance.

Approached us from the other side — from September 2016 to us began to close up girl actress one of the “opposition” theatres, Театра.doc (Anastasia Slonina. — RFI). In principle, no reason not to trust her, we were not any.

She came to the lecture, when we had the conversation about art and Egorovym (Mikhail Ugarov, the artistic Director of the Theater. doc. — RFI). Then she volunteered to help and took me from the hospital when I had surgery on the knee (after I in the Moscow city court beat, I had to have surgery on meniscus). Drove invited to his show. So she’s chosen — offered their help and she sought support and some relationships.

And at one point it was in early December — an evening spent with us turned into a statement about the violent acts of a sexual nature. You need to understand that it is generally for the article. This is the most atrocious article in the Russian legislation because it is the article on which judge one statement. It’s not rape, which need at least some proof. It is possible to specify each, and proving innocence is practically impossible. If you were in one apartment, I think it would be difficult to prove (innocence), because there is a statement. The article winds — up to ten years of imprisonment. The complaint was filed by two of us (Pavlensky and his companion Oksana Shalygina. — RFI). We warned about this (as we think, the same police or other security forces) after the actress when we was in Warsaw. Five days before our return, she (Anastasia Slonina) contacted the person who had our children, that is close to us, whom we trust children, and began to speak: “a statement for them, the cops are after them, they will go to jail…”.

She said that she filed?

— Yes, she said she filed. And asked: “Where are they and when will he return? We have them here day was waiting with the police outside of the home and are unable to wait”. But in that moment, when it happened, we found not a single reason to take this seriously. And we ignored all.

— You link to it did not come out?

— No, with us it never left. And we then decided not to attach importance to this and not to hammer your head with some bullshit. And then, when we were detained… That is what happened in the Investigation Committee: we spent about seven hours. Three of us were detained at the airport, and ended up in 12 hours: passed the interrogation, came the lawyers…

‘Were you interrogated together?

— No, separately in different rooms. We have two lawyers. And after interrogation, we actually were waiting for the convoy. But then we are called to one of the chiefs of the investigators who interrogated (they called it a senior investigator), who started to say something like: “Here is a complicated matter, and in my case the main thing — objectivity, you can not hurry, I have to gather all the evidence, so today I’m letting you go, but you only report on the first call, and please do not leave limits of Moscow”. It seems like a gesture of kindness, but really, it’s a pretty awkward situation.

The law enforcement system is not frivolous, it is based on the psychology of interest and benefit. For such a serious article I’ve seen plenty of people in prison. A very important point — we didn’t have registration and residence in Moscow. This is the main reason why the judge explains why people should be arrested, even article small weight. The fact that I was arrested after the rally “Threat”, I was charged a small article of gravity, I was arrested because I have no registration in Moscow — and how the investigator will conduct investigative actions.

— That is, the lack of registration — the formal pretext for detention?

The formal pretext — lack of residence registration and registration. Important and, in principle, the main. We have no registration, no registration, and they still violate the official order — in the investigation of such cases they must examine the scene, that is, to detain, to arrest and to go on a search. They do not do, and talk about some ephemeral, phantom evidence, and say: “You just be on call”. It was the 14th of December, and the next day we did not have in Moscow, we’re right across Belarus went on the machines in the Ukraine, and from Ukraine came here (to Paris).

— In Ukraine, it means you spent about a month?

Yes. There was a need to make documents for children. Generally, if you take it as a language of communication with the government, first warned us that we are not returned from Warsaw. We ignored them and then they showed us their seriousness. Showed that there are two perspectives of our resolve: either regime camp, which is also an elimination, because 10 years means you 10 years to tell everyone how you became a victim of rapid development. Or another way is to leave the passport control.

This assumption, revealed to me because nobody talked. But I (concluded) on these factors: a warning that we were liberated, despite the absence of registration, that they have violated a court order — all this gives grounds to assume so.

There are things that I don’t make assumptions, and I am convinced and I am convinced that Russia has revived the accusation. He experienced a natural evolution: you can’t condemn a man for counterrevolutionary activities and anti-Soviet agitation. He should speak in the modern language, preferably for Russia, in accordance with international conventions.

— How would you expect that you will have to leave?

— Not very expected. We then thought we were pretty neat. All offers of assistance and support — “let’s make something spectacular and grandiose” we immediately blocked. We did not think that we on this side approach, and everything would be like this.

Producer Театра.doc Vsevolod Lisovsky accused you with her in the beating of one of the actors of the theatre and says he has the records from surveillance cameras, which shows how you beat up the actor’s feet.

— I had a conflict with one of the actors due to the fact that he beat a girl who was friends with us, as we thought then. Beat her head against the tub, choked, spat in her face. After that, he has started writing me and threatening me. He wishes for. We met, he began to throw himself with his fists, so I’m with him, there was a fight.

— This is the same girl who accused you of assault?

Yes. I supported it. Oksana asked him to apologize to all the women and promised that he won’t be the women to beat. At that moment, except we had more actors Театра.doc. There was no one else. It was my conflict with him. We met him outside the theatre, then we talked inside the theater. What’s this video where it is, I don’t know. Vsevolod Lisovsky hates me for a long time. I doubt very much that in this video I.

— Why did you decide to go to France?

— The Alma mater of the Russian revolution. The pillars of European culture from France. Auguste Forms, Louise Michel, a lot of people.

— Are you ready for what will be to live here?

— We want to understand what is happening in Russia, but most likely we will ask for political asylum, because we really don’t want to be ekstrudirovannyj in Russia. To be ekstrudirovannyj or agree to the terms of removal — regime camp for 10 years — this means with a RAM’s obedience to go to the slaughter, advantageous to the state, and pull their loved ones. Go we with Oksana (in prison) — the children go to the orphanage to comprehend the school of life, four people at once. I don’t think that’s a reasonable solution.

The most important thing — to sit because you didn’t even do. In this story I want to stress — no violence was not. There was nothing even close to resembling some kind of violence. This is not peculiar to us.

— How much do you think you as an artist exist in another, not a Russian space will influence what you do?

I don’t know this, life will show. We will continue to engage in publishing house “Political propaganda”, we will continue to work with systems of representation and to deal with matters of art. What and how it will be, I really don’t know. The situation is changing rapidly, and there is not want to make any predictions, which initially will be erroneous.

— That is, until, most likely, you will tackle some administrative formalities?

At least, we view the city and let’s get acquainted with people, with society. Just continue to live and everything. 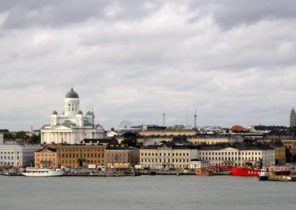