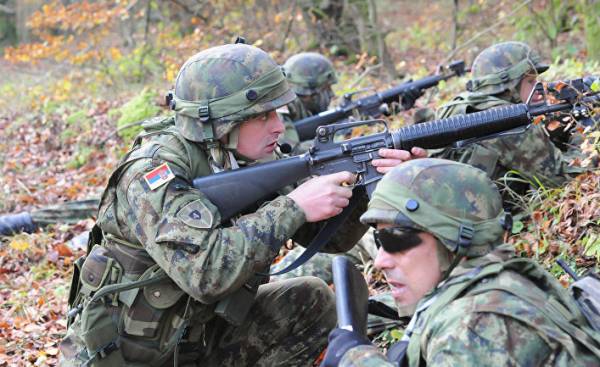 We love Russia, but most of us would like to live in countries that are members of the European Union and NATO. This is confirmed by surveys that were conducted in Serbia in the last few years.

Perhaps this contradiction between feelings and desires confusing, but it is natural for the country in which the society virtually does not discuss issues related to the situation in the international arena, and in which the decisions are guided mostly by emotions.

In fact, Serbia has never been so close to NATO as it is now. Over the past five years, there have been 44 exercises with the United States and the Russian Federation — a total of six. In the framework of the “Partnership for peace” Serbia participated in a total of 23 exercises. They were all held on the territory of countries-members of NATO, and next year it is planned to conduct such exercises on the territory of Serbia. In 2014, Serbia has received from the countries-members of NATO 12 million Euro aid, and Russia in recent times has provided financial support in 2014 and sent a total of 52 thousand euros.

For the past ten years, the Serbian leadership clearly avoided explicit statements about the true level of relations with NATO, on the one hand, and Russia on the other. The Serbian leadership is afraid that, clearly denoting its position will ruin your rating and fall in the eyes of much of the electorate, experiencing positive emotions towards Russia. Stuck between emotions and the desire to maintain military neutrality, Serbian society is still unable to clearly answer even the basic questions. For example: does NATO really make Serbia as a member?

The above data on subsidies and the number of military exercises show, at least, that NATO needs Serbia more than Russia. However, this does not mean that Serbia needed this Alliance. The main reason which can force NATO to use Serbia, is not in itself, the desire to eliminate Russian influence in the region. In General, even if NATO is not very interested in Serbia as such, the Alliance is important to bring her to their camp and thereby prevent the spread of Russian influence.

And why is a military Alliance, to allow a certain state, which is basically surrounded by its members, to remain a military ally of the country, which the Union believes one of the most serious potential military opponents? Not logical would be to include this country in the Union, which it has surrounded, and thus to build a powerful barrier to the spread of the influence of a potentially hostile power? Of course, it would be logical, and anyone who seriously deals with international relations and questions of security, taking into account such an aspect.

In international relations, to paraphrase a wealthy real estate dealer, is the most important three things. The first benefit, second benefit, third benefit (in the case of real estate saying “location, location and location”). Serbia is the location, which is very attractive for all, but it lacks the power to start a discussion about their genuine interests, as well as appropriateness of the strategy of military and political neutrality, which is the rate. For many years the political elites occupy a comfortable position, stating that “people do not want”, thereby removing (even if only at first glance) the entire responsibility for the decision.

The position of the country, surrounded by members of a military Alliance, but, directly or indirectly, tending to another military unit, extremely dangerous, and its hard to keep. As in the case of probable conflict, this country will be for these two potential enemies to target first, and can be completely destroyed. This does not happen only in the case that at the very beginning of the conflict, its allies will not defeat the surrounding members of NATO. However, such expectations are unrealistic. Serbia is surrounded by NATO members and geographically removed from Russia, making it virtually impossible for a military Alliance between Moscow and Belgrade.

Serbia declares its military neutrality, and in the case of possible full-scale conflict does not have to attack. It is in theory. But in practice things often develop very differently. Serbia is a poor country, and it has neither the economic base nor the political (allies), which could guarantee its military neutrality. You must carefully and seriously assess, given its geographical position, all potential scenarios and think how long Serbia will be able to “solo” not only in military but also in political sense.

It should also be recalled that in the recent past, Serbia has become a victim of the conflict of interests of the largest countries in the world. In 1999, the country was bombed, despite the loud protests of Russia and China. Serbia bombed to the end — or rather, as long as Belgrade did not agree to the conditions that it set. Russian missiles and planes were only in the media reports, which maintained the morale of the nation. But in fact they were not. The bombing is considered the main cause of negative attitude to NATO, but all these emotions. Because in Europe there are few countries which have not bombed each other, and now their interests coincide.

In the modern world military and political issues are not formally equal, but in fact they sides of the same coin. That is, if you made a strategic decision to become a member of a large political Union (European Union), the members of which are already in NATO, it is unlikely that you will be able to avoid the decision on their military status. Military neutrality means a strong economic base, as Serbia has no oil, like Norway, no safes and banks, like Switzerland. That is, Serbia needs political and economic allies, and they are in the EU.

The task of political elites to consider the international position of the country and to assess all potential threats, which it may be exposed. It is important to conduct policy so that the country was not in a desperate situation, without significant allies, under pressure and punches that she just can’t handle without breaking. In General, instead of to indulge in strife and emotion, and to amass foreign and domestic enemies, we must seek allies. And instead of the guff we have to open a serious public discussion about our surrounding reality and put achievable goals.

Populists would say that Serbia was twice heroically resisted a much stronger opponent. For the first time — during the First world war and the second during the Second world war. But then Serbia and Yugoslavia was part of the Alliance winner, and then there were two sides from which you can choose from. Today everything is different, and it was obvious even during the bombing, or rather of the conflict with NATO. Just been created and strengthened some new political, and therefore potentially, the military, unions, and redistributed power. Serbia is no longer a “jumper” between the two potential global opponents. This role is now playing Ukraine, and Serbia is far deep in the territory of one of the potential adversaries.

So the fundamental question is whether NATO Serbia? (And if Serbia NATO.) For example, Montenegro has recently joined NATO, which gives her the opportunity to negotiate about the border with its neighbours (Albania, Kosovo, Croatia) as a member of the largest military Alliance in the world. Montenegro is not alone now she has allies. It is known that a large percentage of the Montenegrin population did not want NATO membership, but it was and still benefit. In this sense, the Montenegrin situation is completely comparable with the Serb and that relates to the frontier, and in other matters for which Serbia needed powerful allies.

Of course, the last word should be for the people, but he also deserves to gave him a clear and Frank arguments, and explained the possible consequences of a decision. People deserve respect, not manipulating national emotions, personal tragedies that have experienced a lot of people, and the universal feeling of powerlessness, which then prevailed in the society. The people deserve to become part of the story, and it should not be manipulated emotions on the part of those who wants to get more votes.