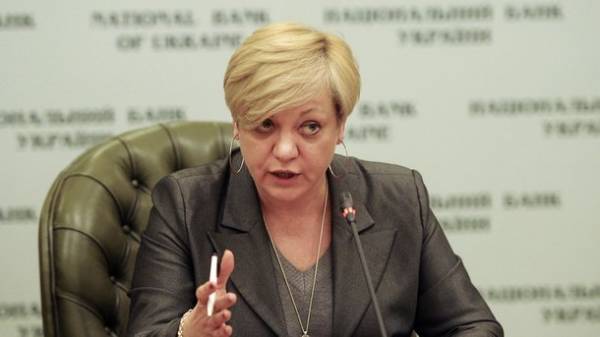 The head of national Bank Valeria Gontareva April 10 officially declared that leaves the post. “After nearly three-year tenure, has decided to leave this position and the Central Bank”, — she said, noting that his task is completely performed.

“I believe that my mission fully implemented, the reforms carried out. I hope that the President will accept my resignation,” — said Gontareva.

The country’s chief banker resigns may 10, but warns that traditionally in the past month. “If BP will vote for my dismissal earlier this term, will leave office early. Ready to report in plenary about the results of my work as the head of the national Bank”, — said the head of the NBU.

Other changes in the composition of the Board is not going to happen. “There is no change in the policy of the Central Bank. A floating exchange rate, inflation targeting, today’s Central Bank — everything we have fought so long, remains unchanged,” she said.

Gontareva also said that after going to a few months to devote with the family, and on further propplane does not reflect yet. “Today” has found out whether the Parliament to accept the resignation of the chief banker of the country and how this might affect the stability of the financial sector.

WILL LEAVE YOU. The Parliament noted that the petition Gontareva’s resignation is likely to pass the vote in the Parliament peacefully. “Don’t see the problem — people want to leave of their own accord. Very many have have a claim. And that voice for her resignation will be, it is clear,” — said the “Today” people’s Deputy from BPP Pavlo rizanenko. I agree with this and scientists. “Resignation accepted, undoubtedly because she filed a statement on their own.

If the President will sign it, the coalition will support. But MPs, who had previously criticized Gontareva, the more will vote,” — said political analyst Volodymyr Fesenko. In his opinion, if the President signs the resignation today or tomorrow, and immediately forward to the approval of BP, the dismissal will still consider at this plenary week, “If this does not happen, Parliament will be able to dismiss Gontareva only in the second half of may, so until may 15, VR is not going to work.”

The analyst noted that, according to unofficial information, Gontareva is going to resign several months ago, and, according to rumors, even applied to the President: “But she had to wait for the selection tranche of the IMF, now the question is closed”.

WHY. Experts believe that Gontareva leaves post of head of the NBU because tired because of public pressure and politics. “She gathered all the negativity from the cleaning market, the devaluation of the hryvnia, and the next head of the NBU will be worked much easier,” — said finanalitik Vitaly Shapran.

Appreciated abroad because she was able to make unpopular decisions in order to lead the financial sector out of crisis. “She was the first person who headed the NBU is not from political circles and from the business environment. This experience gave her the opportunity determined to do what is necessary for the recovery of the system. Her actions were sometimes tough and unpopular, but timely and necessary for the recovery of the banks”, — said the Executive Director of the NABU Elena Korobkova.

But, at the same time, according to experts, Gontareva will be remembered by Ukrainians furious devaluation of the hryvnia, bankomatom, instability and decline of trust in banks. “Her departure was long expected, so the financial sector quietly survive staff turnover. And the rate will be stable in summer — in the range of 26-26 UAH/USD., and in the fall with little to 28-29 devaluation of the UAH/USD.”, — says economist Ivan Nikitchenko.

Cleaning of the banking system and the state

Valeria Gontareva was appointed head of the NBU on 19 June 2014. She has also held positions administering from the Ukraine to the IMF, the head of the Supervisory Board of German-Ukrainian Fund and head of the Board of corporate non-state pension Fund of the NBU.

Finanalytica noted following its achievements as chief banker of the country. The most important thing — when it was introduced a floating exchange rate that eventually allowed to stabilize exchange rate fluctuations. In the assets Gontareva record and the reform of the NBU, and a successful purge of the banking system, which allowed to remove from the financial sector is weak or dishonest banks who laundered money or served as an appendage to the business of the oligarchs. Also reduced the staff of the NBU by 50%, thereby optimizing the government spending on its content.

Experts and the provision of a Deposit guarantee Fund money in full, sparing clients from the hassle and gave the opportunity to their contributions. During the work Gontareva was successfully fulfilled the requirements of the IMF, and Ukraine received four tranches from the Fund.

Vacancy: one in the chair

The future steering of the national Bank built a lot of guesswork. Valeria Gontareva announced their recommendations to the President, but refused to name specific names. But experts are saying that different successors. For example, a likely scenario, the first Deputy head of the NBU Jacob Smoliy, yesterday appointed I. O. Gontareva, in the end, will take her seat.

“Can offer, although there is no doubt that this nomination will pass through BP. Many MPs are critical to Hontareva and her team,” — said political analyst Volodymyr Fesenko.

And finanalitik Vitaly Shapran does not exclude that the resin will last for posts with the prefix “acting” until the end of the year, it is difficult to find the optimal candidate: “Who will choose the President, it is difficult to say, since the last three months, Poroshenko did not give estimates to the work of the NBU. Therefore, it is unclear closer it is to the team’s supporters Gontareva or opponents”.

Among the candidates referred to and known in the financial sector people: the head of the Ukrainian interbank currency exchange Anatoliy Goulet, Chairman of the Board “Raiffeisen Bank Aval” Vladimir Lavrenchuk, head of the Council of the Independent bankers Association of Roman Shpek, adviser to the President of Kyiv school of Economics Ihor Shumylo.

“These names sounded earlier. People have a great experience in the financial sector, with a good reputation, politically independent. These qualities are valued in the IMF. And the opinion of the Fund cannot be ignored, because Ukraine needs to cooperate with the IMF on,” says economist Ivan Nikitchenko.

But the head of “PrivatBank” Oleksandr Shlapak, experts believe it unlikely contender, despite the experience.

The “problem “PrivatBank” has to resolve strong professional who will lead the Bank for privatization. But if you now look for a replacement Shlapak, reform falters,” — said Nikitchenko. One of the possible candidates and called the head of the state property Fund of Ukraine Igor Bilous, who yesterday resigned. “A strange coincidence. But whether it into place Gontareva question, because in the SPF he failed to implement reform privatization”, — said Nikitchenko.

At the head of the NBU can stand and dark horse.

“Candidates in BP has not been discussed. My point is this: good, if appointed foreigner. The analogue of our NBU in England is headed by an American. But keep in mind that these professionals, with experience in the management of centrobanca abroad a bit, so finding experienced professionals is difficult,” — said the people’s Deputy from BPP Pavlo rizanenko.