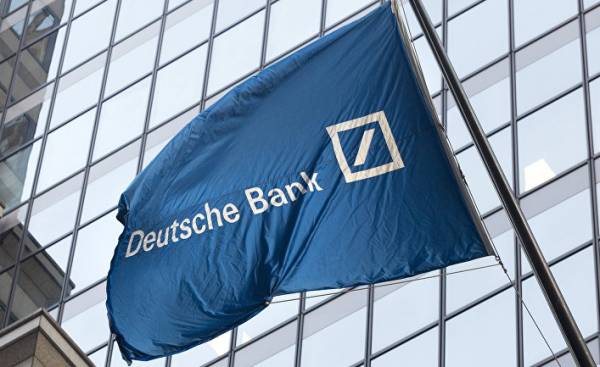 No one could imagine that in Germany it could happen again — the bankruptcy of banks. The last such case happened with the Bank Herstatt in 1974, which became a victim of its own currency speculation. After that, in Germany introduced a Deposit insurance system, and trouble financial institutions relatively unproblematic eliminated. The Germans were satisfied with their prosperous world in which the coexistence of private banks, enterprises and savings banks.

German industrial Bank IKB in the summer of 2007 was one of many who felt himself quite well, although the stock of the Bank, specialized in lending to the middle class, suffered from the turbulence on the market. However, on 20 July the Board of the Bank has published quarterly statistics, which should reassure the market that the Bank is a good start in 2007, and his losses due to the bursting of the overseas mortgage bubble was less than ten million euros. So everything is fine.

But it turned out to be wrong. Just ten days later, on July 30, the Bank had to publish two messages. First, the resignation from his post as Chairman of the Board Stefan Ortseifen (Stefan Ortseifen). And secondly, it was found that the Bank had to admit that his losses due to the bursting of the “bubble” was about a billion euros. Thus, there is a real threat of bankruptcy of IKB, which, of course, no one expected.

It is with these messages and the financial crisis began in Germany that at that time nobody knew. Yes, the financial markets received more disturbing news, the meaning of which, however, became clear only later. At first it was a lot of uncertainty.

Let’s look a little further into the past, a year earlier, in 2006, the crisis began in the U.S. mortgage market. For many years the prices of homes in the United States has grown steadily. Many families, who had relatively modest income, succumbed to this boom in mortgage banks financed the purchase of houses, which these families could not afford it through loans, which are due to the poor solvency became too expensive.

Mortgage banks, however, do not leave these high-risk loans, and sold them to other banks, which, in turn, combine them into the mortgage loan and eventually spread around the world. Thus, credit risk was on the balance sheet of IKB and other German banks. The Germans quickly earned a reputation as particularly naive partners. “When something goes wrong, you always find some stupid German Bank”, — said at the time on wall street.

Few people imagined in 2007, the scale of the crisis

Business banks in private houses for the poor flourished until until prices rose. But in mid-2006, the growth stopped. The market has turned, and more and more home owners found themselves unable to service their expensive loans. In March 2007 their number across America made up about 10.5%. The first material to the victims of the mortgage crisis, was published in our newspaper on 24 March 2004. Then this crisis seems primarily a social problem: poor families, most blacks and immigrants from Latin America —were forced to watch the confiscation of their homes and out on the street without a livelihood. About what magnitude will eventually reach this crisis, knew only a few.

One of them was Nouriel Roubini (Nouriel Roubini), Professor of Economics at new York University. Roubini did a lot of research in developing countries, in particular, studied data from the United States: a speculative bubble, high debt, super-expensive real estate — it was all he knew. It was the example of financial crises “third world”. In September, Roubini spoke at the seminar of the IMF in Washington and predicted that the us will remain unpaid mortgages on several trillion dollars, in connection with which the global financial system will be shaken by events. “Now we all need to start to drink,” said the moderator of the meeting after his speech. Some participants, hearing this, laughed.

In the first half of 2007 there was a few visual examples of what big challenges face the financial markets with all of their computers, models and algorithms to calculate something qualitatively new, if the crisis really breaks out. The “new” one was the crisis in the property market, covering not separate the regions, and all of the United States as a whole. New was also speculative instruments, for example, proven credit insurance, by which banks around the world tried to minimize its associated with credit risks. Theoretically, this increased the efficiency of the system, but in fact led to disaster. Later, the investor Warren Buffett called these securities “financial weapons of mass destruction.” Anyway, the experience of these months has caused despondency among participants about the ability of experts to predict a situation.

In April 2007, the IMF warned in its report that the markets of interest on a relatively safe and risky transactions too similar. This incorrect assessment of the market may still be able to adjust the “shock volatility”, that is a sharp rate fluctuations which could have negative consequences. Meanwhile, various organizations, issued in USA, mortgage loans in particular at New Century, one of the industry leaders, has serious problems. The relatively small investment Bank Bear Streams single hedge Fund, is actively engaged in mortgage lending, were in a desperate situation.

Meanwhile, the stock market was probably the worst barometer, abovesaid about the crisis. Although on 27 February there was a sharp drop courses, and the Dow Jones index has fallen by as much as 416 points, but it seemed to although very abrupt, but still a correction. 16 July, a few days before the collapse of the Bank IKB, the DAX reached its annual high of 8106 points.

A memorable day was August 9, 2007, considered conventionally, the “official” beginning of the crisis. Anyway, right now all we are talking about the financial crisis. On this day the Dow Jones fell 382 points. The reason was the news that French Bank BNP Paribas blocked three of their funds because those because of the crisis in the real estate market was no longer able to accurately assess the size of the investment. In addition, the insurance company AIG, the former at the time the largest in the world and in some period of time one of the most dangerous enterprises for the financial system, warned of the consequences of the crisis outstanding loans.

It was quite a serious warning, but they neither could really disturb the exchange. “Party” continued for another couple of months. On 9 October the Dow Jones reached its annual high of 14 164 points, and only after that began the crisis fall, and quite slow. Calm markets was rather surprising that the alarming messages are constantly multiplied. Even Goldman Sachs, probably the most powerful player on wall street, there were problems with the speculative funds. The investment Bank, however, had sufficient funds to solve the problems on their own.

Including so many market participants remained optimistic. Abby Cohen (Abby Cohen), the legendary Goldman Sachs analyst, said in the December issue of our publication whether it expects a recession, a firm “no”. Too large for this was, according to her, the profits of companies. In fact the recession was already started, and later it became obvious. This crisis was supposed to be the worst for the economy since the great recession.

The financial crisis and the ensuing economic crisis have changed the world in the long term — economically, politically and socially. Regarding the first phase occurs primarily on the following question: was it possible at the moment to speculate about its future scope and to prevent the worst from happening?

In fact, these opportunities were minimal. If the crisis was repeated under the same assumptions, it is possible that the experts would know what to do. But the irrationality and the willingness to surrender the illusions are very high. Many examples of this resulted in his famous book “This other time” (This Time Is Different), written during the crisis, economists Kenneth Rogoff (Kenneth Rogoff) of Harvard, and Carmen Reinhardt (Carmen Reinhardt) from the University of Maryland. In times of crisis is necessarily someone who says: “this time is different. This time we don’t have to draw conclusions from yesterday.” And each time this assertion is an illusion.

However, it is also important to understand that the financial crisis could turn out to be not that hard. The most serious political mistake of the American authorities have admitted the following in 2008: first, the Minister of Finance Henry Polson (Henry Paulson) and the head of the Federal reserve system Ben Bernanke (Ben Bernanke) saved “zagibalsya” investment Bank Bear Stearns, and then, on 15 September, allowed to “drown” the Bank Lehman Brothers. This shock was almost fatal to the entire financial system.

In 2007 the crisis in all its glory demonstrated the weakness of the European monetary Union. But it is politicians and bankers of the Old world took seriously only very late in 2010, when they had to rescue from a default of Greece.

The German banking system is still not overcome consequences of the crisis. Deutsche Bank, which earlier boasted that survived the crisis painlessly, is in distress. Munich’s HRE Bank is considered “bad” and now belongs to the state. And only IKB, which ten years ago started it all, looks attractive. Its entirely privatized and for the last four years he worked with profit.