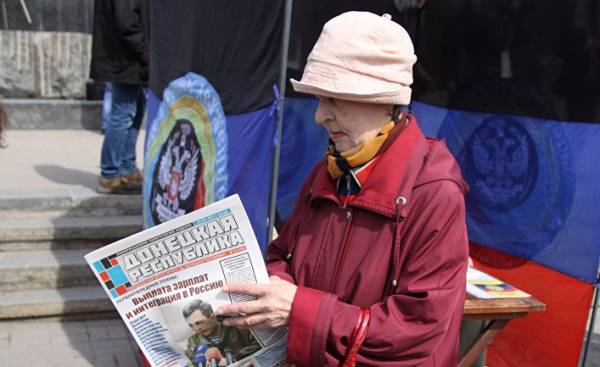 The message of the unilateral Declaration of independence of the Donetsk region, part of Ukraine, but under the control of Pro-Russian rebels, indicates that Moscow did not abandon its attempts to dismember Ukraine.

The fact that the head of the Pro-Russian separatists pulled out-use the name of little Russia, whose borders do not coincide with the borders of modern Ukraine, testifies to a firm intention to destroy the Ukrainian statehood in the form in which it was recognized by the international community since gaining its independence in December 1991.

Ukraine is a European country, part of whose territory — the Crimea — was subjected to a military invasion and was illegally annexed to Russia on the basis of the results of illegal and not recognized the referendum. In addition, a significant part of its territory to be under the control of various groups of Pro-Russian militia, receiving military and financial support from Moscow. They are responsible for the destruction of the passenger plane, which killed 298 people. Thus, we are talking about direct military aggression from Russia, which by force wants to rebuild its zone of influence and rudely tramples the sovereignty of the territory and rejects those who oppose her plans.

While Kiev is carefully adheres to the so-called Minsk process, in which Germany, France and OSCE advocate for a peaceful solution to the problem by saving the breakaway Donetsk and Luhansk regions within Ukraine. But it is obvious that Moscow, which does not want to hear about the return of the Crimea, does not want to cooperate. Europe has already introduced strict and effective sanctions against Russia because of events in Ukraine. It can them to expand.