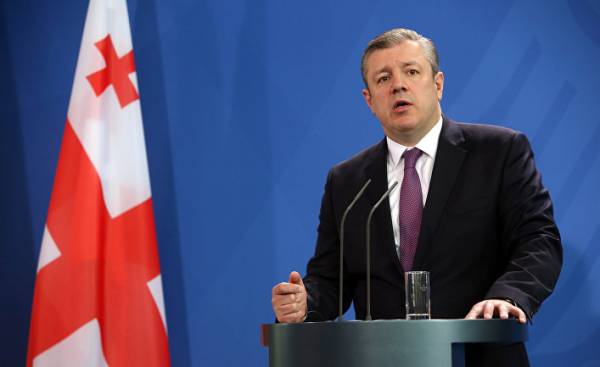 Because of the growing socio-economic pressure the current government of Georgia is trying to put into practice the policies that can be characterized by the oxymoron “To the West, but in good relations with Russia.”

Not wanting to incur the wrath of Moscow, Tbilisi has refused to join anti-Russian sanctions (except for goods from the Crimea), has no plans to join the coalition against ISIS (a terrorist organization banned in Russia — approx.ed.) led by the Americans and rejects the idea of a return to the embargo against Iran. At the same time Tbilisi is becoming increasingly active in cooperation on the axis Moscow—Tehran. In the framework of this cooperation, Georgia signed an important strategic agreement with Russia, Armenia and Iran on the General electricity market.

In January, Tbilisi also signed with Gazprom a controversial agreement on changes to the payments for transit of Russian gas through the Georgian territory. According to the agreement, Georgia will receive payment in cash instead of part of Russian gas. Despite the fact that this Treaty is much more beneficial for Russia than Georgia, the Georgian government refused to disclose details, despite the protests.

Do not immediately believe the talk that the Kremlin managed to bring to power in Tbilisi the puppet government. The trend to strengthen cooperation with Russia should be considered in the broader context: the Georgian leadership is seeking to diversify economic cooperation, as policy orientation exclusively to the West in the times of Mikhail Saakashvili did not bring the expected results. Georgia is also developing cooperation with Turkey and China, but in contrast to Russia’s increased trade with China and Turkey leads to increase the already significant Georgian trade deficit. Diversifying the cooperation, the Georgian government is also trying to respond to the changing mood in society.

Although the popularity of the European Union and NATO among Georgians remains high (72% and 61% respectively), 31% of respondents, according to the latest poll of the Institute the National Democratic Institute, believe that Georgia would be more profitable to shift to Russia. While 53% believe that it is better to continue Euro-Atlantic integration.

Based on these figures, it may seem that the support of orientation to the West in Georgia is stable, however, the popularity of the idea of the return of the focus on Russia in the Georgian society is increasing, with small fluctuations since 2012. The reason should be sought not only in disappointment due to the fact that the hopes placed in the West orientation, but in the cynical hybrid of activities, waged by Russia to influence public opinion in this country. In this sense, great attention was paid to the hybrid influence of Russia on the Georgian ideological sphere through the media, non-governmental organizations and the Orthodox Church. However, the core of Russian success in the socio — economic sphere.

The grapes of wrath

If we want to delve into the factors that most influence the foreign policy orientation of Georgians, we must understand that they are not so different from us. The idea that ordinary Georgians can live on the limit, and to sacrifice everything they have just to their country joined the European Union or NATO, naive.

As confirmed by statistics, 70% of Georgians support the Western integration of the country, do it because expect from this foreign policy of their livelihoods, not because you crave the benefits of liberal democracy (the same can be said about supporters of Pro-Russian orientation of the country). Thus, the Western integration still supports a large part of the population, but this support is based on a fragile basis. And Moscow strategists have realized this long ago.

In this region of Russia in comparison with other powers has several advantages, thanks to the best know-how and a strong cultural, social and economic relations that were established over two hundred years of common history. For example, Moscow might open its labor market, which purposefully closed. For a country whose population suffers from unemployment, it is extremely tempting. During the year of study the situation directly in Georgia (mainly in rural areas) I met a lot of young people, who were Pro-European, which, however, without hesitation you were ready to support the rapprochement of Georgia with Russia, if it gave them the opportunity to work in Russian cities.

However much more from the Kremlin — in terms of Georgian agriculture, which employed about half of the able-bodied citizens. In the last 25 years, this Georgian industry was going through hard times. Privatization after the collapse of the USSR led to extreme fragmentation of plots. Most farmers have small land, which is sufficiently high in order to provide food for one family. New a serious blow to agriculture caused the government of Mikhail Saakashvili. He’s trying to contribute to NATO membership and to intimidate Russia, as increased spending on the army and the budget of the Ministry of agriculture has minimized so much that in 2010 he barely reached 0.4% of GDP.

The last and most severe blow to Georgian agriculture has caused Russia itself, closing the border for small-scale producers from Georgia.

When I worked in Eastern Georgia near separatist South Ossetia, local residents yearned for the days when the Russian border was open and they were able to sell — often very profitable — their harvest in the Russian cities.

The closure of the Russian borders has destroyed the lives of many local families, as Russia due to its geographical position was the only natural market for their agricultural products. All other neighbouring States, like the EU, produce exactly the same products, like Georgia, and due to more advanced agriculture foreign products is more and cheaper. Neighboring manufacturers often expel Georgians from their own market.

I also met with indignant farmers who poured their crops of apples in the river and cut down fruit trees for firewood, knowing that the longer they have nowhere to sell their products. Local factory offered them for 25 pounds of apples in terms of 40 cents. And it is people like these angry farmers who form the core supporters of Russia in Georgia.

However, during my work in the region three years ago, many local farmers are still eagerly awaited trade liberalisation between Georgia and the European Union. On the basis of the agreement signed in 2014, for the Georgian farmers had to easier conditions for exporting to the European market. The problem is that many local farmers are connected with this agreement completely unrealistic expectations. Recently, when it became clear that before you start to export to the EU, Georgian farmers will have to carry about 350 directives, raised a wave of frustration and anger.

Also we must not forget that not only opens the European market to Georgian producers, but also the Georgian — European farmers that are extremely competitive. It is assumed that in the short term, this agreement will help Georgia, but in the medium-term, despite the efforts of Brussels and Tbilisi, the situation of Georgian farmers, especially in Eastern countries does not improve and even Vice versa maybe a few more to deteriorate.

If this happens in fact, the Kremlin can shift to a policy of carrot and gradually remove barriers, which he deliberately put in the way of socio-economic development of Georgia. If to this be added a full-scale outreach campaign and the reluctance of the West to become more active in the region, soon the consensus-oriented country, still existing in Georgian society can collapse.

Hybrid war of the Kremlin against countries in its “near abroad” has several stages. Inciting a traditional war, the “freezing” of local separatism and harming the economy are accompanied by large-scale information campaign and are the first stage, the purpose of which is to stop the integration orientation of the state, leaving the Russian orbit. It did with Georgia in 2008 and Ukraine recently.

However, as the developments in Georgia, there is a second stage of hybrid war, the Kremlin uses primarily the deteriorating socio-economic situation in the country and affect foreign policy orientation of its population. At this stage, Russia is acting very slowly and quietly, but disarmingly effective.

At the same time plays into the hands of Moscow, not the West.