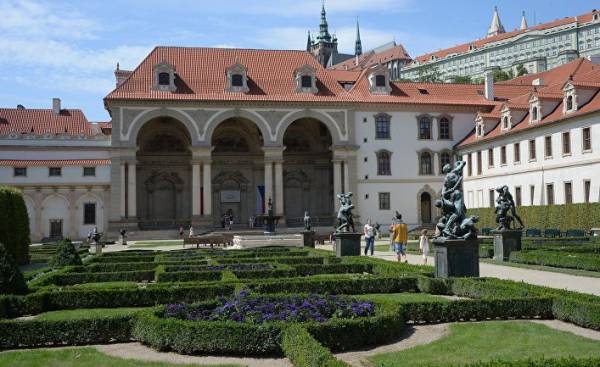 On Wednesday the Chamber of deputies has approved sending three hundred Czech soldiers to the Baltic States. It was opposed by the Communists and some members of the party SPD, including deputies from the Olomouc region radhimë Fiala. In addition, at the end of June he and some members of the ENF (“Europe of freedom and peoples”) called for the Russian Parliament and the Ministry of foreign Affairs. We do not claim that all these facts are interrelated, though…

On Wednesday, the movement “Freedom and direct democracy” (SPD), the Tomio Okamura presented a United front with the Communists. Together they tried to prevent the adoption of a decision to send a contingent of soldiers to the Baltic States. According to them, this is not necessary.

Other parties of the government coalition and the opposition scored a victory over them by the number of votes. “Now you don’t even hide that they are the fifth column of Putin”, — said the Chairman of the party ТОР09 Miroslav Kalousek the Communists.

But it is not only about them. Movement SPD has long maintained the Russian Federation, including, for example, on the issue of Ukraine.

June 23, Radim Fiala went to Moscow. He was part of a delegation formed of members of a transnational nationalist faction “Europe of freedom of peoples”. Boast trip Fiala did not fail on his page in Facebook. First, he visited the Ministry of foreign Affairs of the Russian Federation, and then — in the Russian Duma.

“With our Russian colleagues we discussed the relationship between European countries and the Russian Federation. I have to say that we have similar view on issues concerning the fight against terrorism, and we discussed the sanctions that the EU and the US imposed against Russia,” Fiala wrote in Facebook.

“The Russians believe these sanctions are punishment for Russia’s independent policy. I must point out that I personally seriously fear that influential part of the political spectrum of the European Union and the United States draws us into a conflict with Russia at any cost. Someone may not like, but the fact is that, despite the sanctions, Russia’s return to economic growth and its standing in the world is growing,” says Fiala favorite phrases of Russian propaganda.

What is the independent policy of Russia, from the publication unclear. But definitely something that sanctions against Russia were imposed after its actions in the Ukrainian conflict that Russia itself that denies that evasively admits — depending on how much accumulates evidence of the presence of Russian soldiers.

The Russian threat does not exist

But back to the Czech Republic. As Fiala proves that, along with other members of the movement SPD voted against sending Czech soldiers into the Baltic States? “We support cooperation in the formation of the armies of Estonia, Latvia and Lithuania, but we are against the deployment of so-called progressive forces of the NATO in the territory. This will lead to further escalation of tensions in the region”, — said the Deputy.

Why tensions in the region generally started to increase? Yes, everything is simple.

“The aggravation of relations with Russia has led anti-government coup in Ukraine, when was overthrown the legally elected President and government. The uprising in the East of Ukraine and the secession of Crimea from Ukraine according to the results of the referendum were only a consequence of this. No real Russian military threat to the Baltic States did not exist. With the support of, for example, of the four Visegrad countries, the Baltic countries may create their own effective defence force,” says Fiala.

Of course, the Baltic countries may create their own armed forces. But, according to Fiala, there is no real threat to them comes not, it is unclear why then those forces need. Fiala tries to create the impression that NATO itself is trying to concentrate its forces in the Baltic States. But this is not true, and the usual interpretation used by the Russian side.

In 2015 Estonia, Latvia and Lithuania has asked NATO to place on its territory a permanent contingent, consisting of at least one brigade. This request was a reaction to the events in Ukraine, where the Donetsk and Luhansk regions, with their numerous Russian minority, attempted to secede from Ukraine and create their own Autonomous state, which led to the frozen conflict with an uncertain outcome.

The Baltic States reacted to and referred to the secession of the Crimea after the referendum, which was conducted “under the supervision” of the Russian paratroopers. For example, Estonia has a large Russian minority, and this country is aware of the risks involved. In addition, Estonia is one of the few NATO members that for several years now allocates 2% of its GDP on defense.

“We do not see any overt threats from Russia to address any of the NATO countries,” — said in June this year, NATO chief Jens Stoltenberg, commenting on the deployment of NATO forces in the Baltic States, thereby confirming in advance the words Fiala.

However, the NATO Secretary General said the following: “we noted a large concentration of armed forces (Russia) in the Baltic sea, and we know that Russia is prepared to use military force against its neighbours, as happened in Georgia and Ukraine”. However, this is not the Fiala said.

The pseudo-Golik Ukraine and in the Crimea

It should be noted that Fiala follows the line of his party colleagues. The concept of defence policy of the SPD motion, you can read the following: “Ukraine unlike Russia is an artificially created state, and its boundaries are defined, the former political leaders of the Soviet Union. Ukraine has no historical tradition of own statehood, and for 25 years of its existence, Ukraine was unable to create a functioning government acceptable to all its citizens and ethnic groups.” Or this one: “In Russia today, as before, positive about Czech products and Slavic mutual aid still plays a role, despite all the senseless sanctions and embargoes…”

The Chairman of this movement, Tomio Okamura participated in seminars devoted to “myths about Russia” and Deputy Yaroslav Golik went to their engagement even further.

Golik, who previously were unaffiliated with a candidate of the KSČM, and is now the MP from the “Dawn” and a member of the movement Okamura, went to rest. To The Crimea. On the anniversary of the annexation. Ukraine responded to a five-year ban on entry into their territory. Golik has capped it all that gave an interview to Sputnik. This website is one of the few obvious Russian propaganda tools in the Czech Republic.