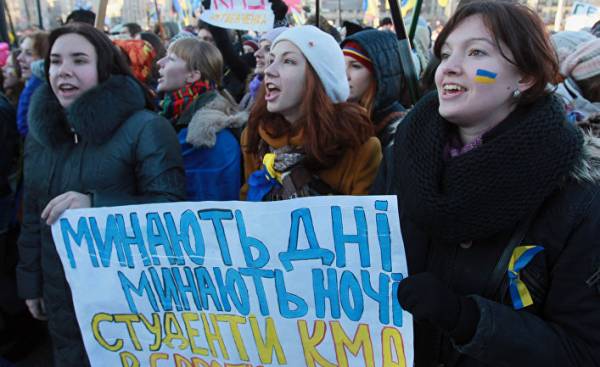 Recently, when Vladimir Putin was asked how long will the Ukrainian crisis, he replied: “I don’t know. It depends on the people who live there, how long they will tolerate it. I do hope that this will end, and will end this time, God forbid, without bloodshed, in the course of democratic processes.

According to Putin, as transfers TASS, hostile relations with the first and most important neighbor have done more damage to Ukraine than Russia: over the past year, Ukrainian GDP is declining and all economic activity is agriculture. Putin did not miss the moment to stress that since Ukraine has signed a number of agreements with the EU, affected the turnover, not only with Russia but also with countries of the European Union.

“Ukrainians and Russians are very patient people, and we hope that soon, our relations will be normalized,” — said Putin.

The Ukrainian crisis is the biggest ticking time bomb in relations between Moscow and the bloc, the EU/NATO. If we assume, where it could potentially start a full-scale war (or battle of judgement day), in the first place begs the Ukrainian-Russian border in the Donetsk and Luhansk area controlled by the Ukrainian government, or the Peninsula of the Crimea, which the Russians promptly annexed, the West responded multilevel sanctions.

The change of the head of the White house after the election Donald trump has not brought almost any changes to this region of the world. The tension has not abated and analysts warn about a possible attack this summer. In their view, the friction with NATO on the border in the Baltic States — only maneuver, distracting attention from events in the South, in the Russian underbelly, a few hundred kilometers from Moscow.

In the Baltics, NATO deployed several thousand troops, but Ukraine in fact has turned into the most Eastern Outpost of NATO, although it is not a formal member of the Alliance and will not be in the near future. In such a situation there is no sign of a peaceful resolution of the conflict, although for the settlement, the prerequisites were created in the form of the Minsk agreements, the guarantors of which were Germany, France and, in fact, Russia.

One interesting fact was made public a few days ago, demonstrates the degree of (in)credibility, even at the highest level. When Vladimir Putin flew to the “famous” meeting with Donald trump in Hamburg, which at the time hosted the summit of the Big twenty, was chosen for that strange, roundabout route of flight. The presidential Ilyushin-96, one of the four presidential wide-body aircraft crossing the skies over Poland and the Baltic countries, and flew from Russian territory to Hamburg through the Baltic sea. Why the presidential plane chose the route, not officially explained.

So what about this episode, one can only assume that after the recent incident involving the defence Minister Sergei Shoigu (his plane was flying to Kaliningrad and in the air met with Polish F-16), responsible people in the Kremlin had to send his boss on a safer detour route. Despite the fact that the presidential plane is equipped with the most modern means of protection, yet he is very clumsy and slow, like a fat goose, so advanced fighter-interceptor easily could shoot it down at the time when the aircraft was flying in airspace without escort and protection of the Russian fighter-bombers.

Thus, regardless of the upcoming meeting of all meetings in Moscow, the team chose the air space over international waters of the Polish airspace. By the way, in Warsaw resumed the campaign, which aims to prove that the Russians intentionally shot down a Tu-154 with the President Lech Kaczynski and his key advisers on Board in April 2010 during landing at Smolensk. An eye for an eye, a tooth for a tooth. Probably the Russians did not rule out that possibility when I was planning this historic route of the leader.

The boundless black earth plains of Ukraine the two armies look at each other in sights. Ukrainian national forces under NATO formally instructing are fighting with the rebels in the Donbas. Forces of the Kiev authorities is much greater than the separatists and continue to grow, but no one knows what’s going on on the other side of the Russian border.

It is known that the Russian armed forces command and control rebels in Eastern Ukraine. And no one doubts that at the moment when the Ukrainian army entered the final battle with the rebels, it will come into direct conflict with the Russian armed forces. Although Moscow has consistently denied that its soldiers are fighting in Donbas, clear handwriting, which unmistakably points to the author.

Now, most of the attempts of Ukrainian forces to defeat the rebels ingloriously ended in heavy defeat. Pro-Russian “rebels” has successfully shot down Ukrainian drones, inflicted a brutal precise strikes with artillery, and proved that are able to skillfully fight with the use of electronic means of warfare. All these are the main characteristics of the Russian army, which recently went through a substantial technological upgrading, and parochial rebels, the rebels against the Central government, from which one would expect only the skillful handling of Kalashnikov old and 76-millimeter Perspective.

Russia, just as Putin said in Belgorod, waiting to support the discontent of Ukrainians, the situation in the country. Ukraine is not the first time tries to shift and go to another camp. In 2003 the then President Leonid Kuchma said that membership in NATO is a strategic plan, however, anticipating the problem, the politician (Soviet hardening) quickly abandoned such purposes.

Viktor Yushchenko, who came to power through the orange revolution, also aspired to this goal, but special successes have not achieved. His main rival and successor, Viktor Yanukovych abandoned a previous plan and has relied on non-accession countries to the block, however in 2014, after the Maidan, Yanukovych managed to save the life only thanks to Putin. The Ukrainian President was evacuated from the Ukraine by Russian special services helicopter and taken to asylum in Russia.

The price of rapprochement with the West

After the Maidan the new “Pro-NATO” became President Viktor Poroshenko. He clearly stated that he sees Ukraine only in EU and NATO. This time the patience of the Russian bear may not justify itself. Perhaps now the Ukrainian economy is not so good as it was during the cooperation with a complementary Russian economy: interrupted historical trade connections, and by 2019 Ukraine will not be a major transit hub for the transportation of gas to the EU market.

However, it is difficult to imagine that the leading countries of Europe can allow the Ukrainians again turned 180 degrees and returned to mother Russia. What is now in Ukraine, bad economic situation, the last reason to abandon the project “Ukraine in EU and NATO.” In General, all Eastern European countries experienced difficult economic period at rapprochement with the Western world. Most paid for this convergence is the loss of its traditional industries. And still the processes are inexorably, though sometimes complains about some of the leading countries.

Ten years ago when in Gdansk I interviewed Lech Walesa, the legendary Polish President, who headed it not one time, I almost fell off the chair after his first statements. That’s how the person that has contributed to the democratic changes in Eastern Europe in the distant 80-e, answered the first question of what became Poland after 30 years of democracy: “When I look back at the path we have traversed, I doubt whether we even need a revolution. There today thanks to her we have some advantage”. These words Walesa shocked me, sitting in the former presidential residence on the long trgu in Gdansk.

Of course, you can somehow justify this policy, which from the work of the shipyard has grown into the doctor numerous American universities. The fact that in that period someone from the powers that be were going to close down his shipyard, Walesa was upset. Probably internally it could not come to terms with this fact.

Of course, the European Union, under the supervision of the United States will not allow investment in Ukraine was lost because of the Russian-Ukrainian patience. This project has consumed billions of dollars. According to former assistant Secretary of state Victoria Nuland only training a loyal Ukrainian political circles to the revolution had spent five billion. They were passed with the tacit assistance of Germany. Now how much money is allocated to support Ukraine, is unknown, but no doubt, it is still about billions. In addition, the EU went to the liberalization of the visa regime with Ukraine, and more recently the Ukrainians do not need visas to travel to the EU.

Military cooperation with EU/NATO, surprisingly more noticeable than civil interaction. On Ukrainian land, and the (Black) sea constantly carried out military exercises with participation of the countries-members of the Alliance. Exercises in practicing landings on land are conducted close to occupied Crimea, or in the sea near its shores, or in Romania (the main us base in the region). It is clear that each of these exercises up at the feet of the military forces of Putin on the other side of the border that doesn’t alleviate tension.

The Ukrainian side, of course, denies the presence of NATO forces on its territory, but believe it as well as the statements of Russia about the fact that the Donbas is not its soldiers. Sometimes directly and sometimes through intermediaries, the two strongest States look at each other in sights, and this situation is much more dangerous than the cold war, when there was a buffer zone, in some places stretching for several thousand kilometers.

Recently, on one Russian website has published an interesting assessment of events. One analyst wrote that the West pressed Russia on all sides, and the last time something like that has happened in 1940-1941, when Hitler was preparing to attack Stalinist Russia. If you look at the map of dislocation of the troops, then, according to him, everything looks identical.

The process has gone too far, although in the Western media are increasingly sounding a warning that military intervention in the Russian sphere of influence, NATO does not bring anything good. Ukraine is not Montenegro’s accession to NATO which, with its two thousand soldiers can’t hurt anyone, because it’s a small and insignificant country. Ukraine is a large country in the Russian underbelly, and flirt with her is to play with fire as a few days ago, I wrote Doug Bando in “Forbes”.