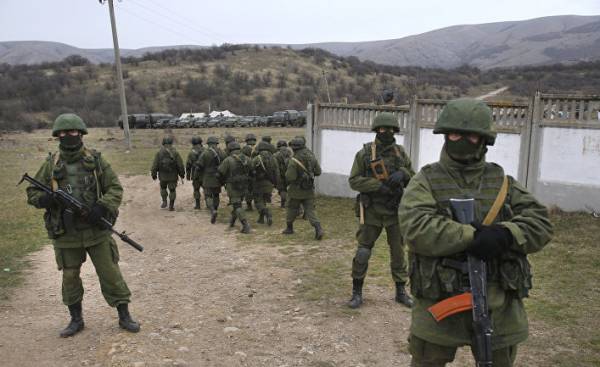 Career Sergey Eliseev partly explains why the Ukrainian armed forces handed over the Crimea virtually without a fight, and why NATO now says that she is preparing to Russia’s attempts to undermine the loyalty of troops in the Eastern European countries of the Alliance.

His rise to the second most important post in the Ukrainian fleet long before Russia’s takeover of Crimea demonstrates that the loyalty of many troops from countries that once belonged to the former Soviet Union, remains divided.

From Eliseeva was the Russian roots, but he served the other post — Soviet republics- Ukraine. In a difficult situation, he defected to the Russians. Military analysts believe NATO is that Moscow considers people with similar ambivalent personal relationships, potential valuable asset in the event of a new confrontation with the West.

In 2014, Elisha was the first Deputy commander of the naval forces of Ukraine, most of which were based in Crimea. That’s when Russian soldiers in uniform without insignia began to seize Ukrainian ships and military bases on the Peninsula.

Instead of resist, Elisha left the service and subsequently received a new post — Deputy commander of the Russian Baltic fleet.

Elisha, who is now 55, did not respond to questions sent to it by Reuters via the Russian Ministry of defense.

However, Kiev does not doubt that anyone who belongs to his loyalty. “When he was sworn in Ukraine, for him it was just empty words. He was always set up Pro-Russian”, — said the current commander of the Ukrainian Navy Igor Voronchenko, who had once served together with Yeliseyev.

In fact, the Russian soldiers at the end of February 2014, with ease succeeded, Elisha was only one of many defectors, and Russian resistance had almost none of the Ukrainian military in the Crimea.

Next month Russia annexed the Crimea, entered into a serious confrontation with the West, which further aggravated due to the involvement of Moscow to the still ongoing rebellion in Eastern Ukraine.

How to show more than a dozen interviews, which were taken by Reuters, people on both sides of the conflict during the seizure of Crimea to Moscow and its Crimean allies used the weakness of the armed forces of Kiev to undermine the ability of the Ukrainian military to fight back.

The Russian Ministry of defence has not responded to Reuters questions about his version of the events of 2014.

One of the senior officers of NATO forces told Reuters that Russian intelligence continues to use the same tactics as in Crimea, and is trying to recruit ethnic Russians who serve in the armed forces bordering Russia countries.

On condition of anonymity, the officer said that the Alliance is particularly sensitive to the risk in countries with a high concentration of ethnic Russians — and first and foremost in the Baltic States.

According to him, NATO has been forced to take precautions, although the threat should not be overestimated — Russian origin does not always mean loyalty to Moscow.

Officials from the Baltic countries — former Soviet republics, in contrast to Ukraine, including NATO — I do not consider the danger serious.

NATO Secretary General Jens Stoltenberg (Jens Stoltenberg) also claims that he trusts the armies of Estonia, Latvia and Lithuania. However, he told Reuters: “We have to remain vigilant. We should improve our intelligence tools and should detect any attempt to undermine the loyalty of our forces.”

The loss of vigilance

Ukrainian attestation Commission, which conducted an interview with Yeliseyev before his appointment to the post of Deputy commander of the Navy long before the annexation, apparently, vigilance is lost.

Elisha was born at Moscow, in 1983 he graduated from the Soviet naval Academy in the Russian city of Kaliningrad, and then served in the Russian Pacific fleet.

The Commission asked Eliseeva, what he will do in the event of war between Russia and Ukraine. According to a former officer of the Ukrainian Navy Miroslav Mamchak, served with Yeliseyev, he said that he will resign. Despite this response in 2006, Elisha was appointed.

Mamchak not tell Reuters how he could know what was discussed at the Commission, but subsequent events confirmed his version.

Relations between Russia and Ukraine deteriorated to the extent that, as Kiev closer to NATO, and eight years after his appointment, Elisha kept his word and resigned from Ukrainian service.

Russia’s actions were not the only factor influencing the events in the Crimea. Ukraine has for many years neglected their armed forces after the overthrow of the government in Kiev there was a power vacuum, and many residents of the Crimea felt more sympathy for Moscow.

However, it is important that many Ukrainian soldiers associated with Russia changed sides, when the annexation and some of the officers pretended they resist the Russian, only to avoid a military Tribunal. Moscow also intercepted orders from Kiev that they did not reach the Crimean garrisons.

“What happened, there was nothing spontaneous. Everything was organized and everyone played their role,” says Michael Koval, at the time, former Deputy commander of the Ukrainian border troops, now occupying the post of Kyiv Deputy head of the security Council.

The invitation to treason

Voronchenko, at the time of annexation is also former Deputy commander of the Ukrainian Navy, said that after the beginning of the Russian operation, he also received offers to go on the side of Russia.

He told Reuters that these proposals came from the head of the self-proclaimed Pro-Russian government of the Crimea Sergey Aksenov, as well as from the commander of the Russian Southern military district and Deputy of the Russian Minister of defense.

On the question of what he was offered in exchange, Voronchenko said, “the Post, the apartment. Feldman proposed to appoint me as the Minister of defense of the Crimea”. Neither Feldman nor the Russian defense Ministry did not respond to Reuters questions about these contacts.

Voronchenko, like many other senior Ukrainian officers who served in the Soviet armed forces together with the people who are now serving in the Russian army. He also spent many years in Crimea, which Russia has leased from Ukraine a base for its black sea fleet since then, as in 1991 the Soviet Union collapsed.

“Generals who pleaded with me… said that we belong to the circle that we come from the Soviet army, he recalls. — But I told them that I’m different… I’m not yours.”

On the side of Russia was commander of the naval forces of Ukraine Denis Berezovsky, along with several subordinates. He was later appointed Deputy commander of the Russian black sea fleet.

His example was followed by many others. For example, the servicemen of one of the Ukrainian units of the Russian watched TV. On the screen appeared the President Vladimir Putin.

“To my surprise they all stood up, — says an engineer from this division Svyatoslav Wetlinska. They was waiting for.” Most of these soldiers defected to Russia.

Even those who were ready to resist, were in a hopeless position. One of the Ukrainian border guards told Reuters that his commander had destroyed the ships of their unit, so they do not fall into the hands of Russians and ordered his men to shoot at anyone who tries to enter the territory of the base.

However, the relationship on the basis of worked — Russians choked or cut. Once isolated from its surrounded by superior Russian forces, the commander made a deal with the officer who commanded the Russian forces.

He allowed the Pro-Russian civilian without consequences, to open the gates of the base. Ukrainians “like as not could do anything — you can not shoot at civilians,” — said a former border guard, who spoke on condition of anonymity as he still lives in the Crimea and in connection with this is afraid of trouble.

For civilian base became the Russian soldiers, who offered the Ukrainian military to side with Russia. About half agreed, but the commander refused and he was allowed to leave Crimea.

“He did not resist, — says the guard. On the other hand, he did everything he could under the circumstances”.

Two other people, directly observed annexation, the former Ukrainian soldier, now a clerk in one of the Russian bases in the Crimea, and a source close to the Russian armed forces, while located on a Peninsula-also mentioned the same false collision.

“You have to understand that the capture of the Ukrainian military
units in the Crimea was a mere window dressing,” says the source, the Russian armed forces.

The Baltic NATO countries differ in many ways from Ukraine. For example, after their accession to the Western Alliance in 2004, former Soviet officers have largely abandoned their armed forces.

Officials also point out that among the seven Latvian soldiers killed in operations in Iraq and Afghanistan, was Russian-speaking.
However, these countries have drawn the lessons of the Crimea. “We, of course, take into account that it was not only about the question of loyalty. During the Crimean operation was received about the orders and blocked the connection,” claims the state Secretary of the Latvian Ministry of defence Janis Garisons (Janis Garisons).

In the end, Latvia has changed its laws and now the commanders of the default duty to defend. Thus, Garisons emphasizes that the simplest of the necessary steps have been taken long before the annexation of Crimea, back in 2008. Then was introduced the test of intelligence “anyone who entered the service in the armed forces, from private to General”.