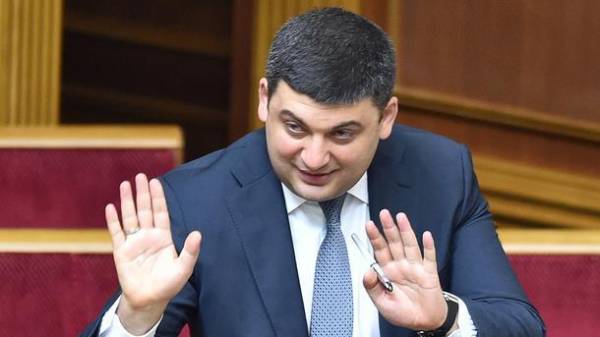 External debt of Ukraine is 80% of GDP. This was stated by Prime Minister of Ukraine Volodymyr Groysman in an interview to “Business capital”.

According to the head of government, a significant amount of debt necessitated a restructuring in 2015, when Finance Minister Natalia Yaresko and Prime Minister Arseniy Yatsenyuk.

“We definitely needed to do then restructuring our external debt even now account for 80% of GDP,” – said Groisman.

The Prime Minister said that with a weak economy this index is very high.

“Especially in a situation when 5% of GDP we have to spend on national security, 5% of GDP – the deficit of the Pension Fund. In addition, about 4% of GDP we spend on servicing of external national debt. So we needed a restructuring, it was the only correct step. And here, I believe, Yatsenyuk’s government has done a very solid job. I was in Parliament the speaker and heard criticism from different sides, when discussing the issue of restructuring. I told everyone then that we have the restructuring of the government, but if someone can do better, I’ll sign a business trip, go to creditors and agree. But nobody went. What could really be done at that time, the Ukrainian government has done,” – said Groisman.

We will remind, the international rating Agency S&P had previously warned that in 2019, when Ukraine will elect a President, the government may face difficulties in paying large amount of maturing debt.

“The restructuring of external debt of Ukraine in October 2015, provided the government some reprieve, during which it can try to adjust the dynamics of the debt by improving budgetary performance and implementation of reforms that would promote economic growth”, – according to S&P.

The American Conservative (USA): as a non-profit LGBT organizations and their funders-billionaires are reshaping the world