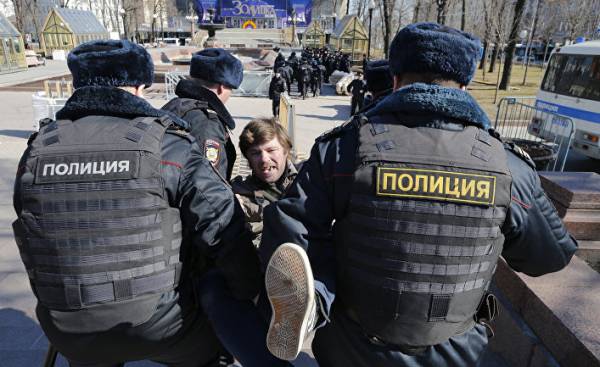 Russia’s recent demonstration of striking in its scale and geographical coverage. “Demonstrations of this level across the country has not happened for a long time”, — said the expert on Russia Martin Kragh (Kragh Martin) newspaper Svenska Dagbladet.

Demonstration against corruption in the country has covered all States and thus differed from earlier protests, says Martin Krag, head of the Russian project at the Swedish Foreign policy Institute.

“Demonstrations of this level and across the country haven’t happened. In recent years, carried out only in separate demonstrations in Moscow and St. Petersburg. Now everything was unusual,” he told SvD.

According to the estimates of news agencies in Moscow, the demonstration was attended by at least 10 thousand people. More than 700 were detained, according to the Agency AFP.

Besides Moscow, 20 people were arrested during demonstrations in Siberia and East of Russia, reports Radio Free Europe. In St. Petersburg, too, has seen protests, writes the Russian news Agency Interfax.

The reason so many people participate in protests in Moscow and other cities was the fact that the problem of corruption for many, says Martin Krag.

“The first the conclusion is obvious: corruption is one of the most important unifying political problems, as this topic applies to all, young and old, right and left. That is why this issue is able to mobilize people to hold protests against the ruling elite of Russia, and that’s why we saw so many people at demonstrations in the huge number of Russian cities.”

In the pictures the news agencies and social networks can be seen as a riot police drags away individual protesters.

“There were a lot of police, and the main Central streets of Moscow was almost closed where settled riot”, says Krag.

One of those arrested was well-known opposition activist Alexei Navalny. Martin Krag stressed that the Bulk is important for the opposition, but it’s unclear what he can do in the political sphere after he was nominated by the judicial prosecution.

He was accused of theft in the court of the city of Kirov. This means that he will not be able to run in the presidential election next year.

“Navalny is the most famous figure in the opposition of the last generation, and it is important. The question, however, is the measure of his real freedom of action.”

Martin Krag believes that there’s a direct connection between the protests in Russia and Belarus, but they have a similar background.

“They coincided in time and become a symptom of problems common to many post-Soviet States, where protests are often directed at a political abuse of power and authority and corruption. Therefore, in Minsk the demonstration of such disparate composition — from twenty students to pensioners”.

Martin Krag considers “extraordinary” the fact that the demonstrations have not prevented even before they start, however, the expert does not want to speculate why it was allowed them.

“You would expect that the authorities will prevent them in advance. Not least because the legislation since the protests in 2011 and 2012 is becoming more repressive”.