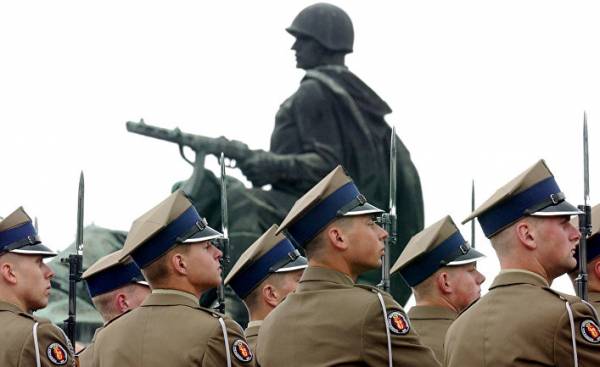 Nasz Dziennik: Not silent echoes of the Russian Duma, which demands to cancel the Polish law banning the promotion of communism. It’s actually “a sacrilegious act of the Polish authorities” and the desire to diminish the role of the red army, as stated in this document?

Zapalovsky Andrzej (Andrzej Zapałowski): Polish law, of course, has nothing to do with blasphemy. The amendments, which were signed by the President Andrzej Duda (Andrzej Duda) (recall that the Seimas adopted them in April 2016), regulate the issues connected with dismantling of non-utilitarian objects in nature, such as monuments glorifying the totalitarian system. It is an act of historical justice, it is a pity that we reached it so late.

The problem, in my opinion, is more complicated: the diet within the law deals with such important topics as the prohibition of propaganda of fascism and communism, addresses the issue of monuments of the red army, but unfortunately, it does not introduce a ban on the promotion banderizma. If he approached the matter comprehensively, that is secured on the legislative level, the need to eliminate not only the relics of communism, but also characters banderizma, the message would be more clear: we’d said that in the Polish public space there are no monuments dedicated killers of all kinds.

— It is curious that the Council had addressed his appeal, in which she criticizes Poland, parliaments and different institutions of the European countries. Russian politicians are trying to exploit the hostility of the European elite to the current Polish leadership?

The appeal is addressed, in particular, parliaments of countries of Western Europe, the OSCE parliamentary Assembly, PACE and the European Parliament. It is intended to create resonance in these institutions and even more to set them against Poland.

— We can say that the Russians have chosen the same technique as the Polish “irreconcilable opposition”, which tries to draw the war with the ruling party “law and Justice” (PiS) a variety of strength?

— Implacable opposition to support our Western neighbors who do not like the government, seeking to become in their decisions are more independent than its predecessors. But I would like to draw attention to one point: the situation in Poland, the appeal of the opposition to the support of the street, and methodically uses abroad Moscow. In this context, Poland should not be to fight all at once on all fronts, because even our “strategic partner” of Ukraine that plays as you would expect, with “Law and Justice”, and is on the side of the “Civic platform” (PO). The authorities should think about it.

— Returning to the details: what really bothers the Russians? Does the new law on decommunization of public space intergovernmental agreement of 1994 on the graves and places of memory of victims of wars and repression?

— It is a question of interpretation of certain provisions. Please note that we are not talking about the graves, and on monuments. The law banning the promotion of communism does not apply to monuments that are not on display, that is, located in the cemeteries or other burial sites.

The problem is that the Russians do not separate graveyards from monuments?

— Russia is fighting for the memory of their fallen soldiers in the European public space. The sharp reaction of the Duma to the Polish law on decommunization aims to unite experiencing a crisis of identity of the Russian people around certain values and ideas. This approach worked in the past and we can assume that it’ll work now.

Russia has long been promoting the idea that the red army brought freedom to Poland and all of Europe, it is part of the Russian historical policy. In this regard, anyone who thinks otherwise, offends the soldiers of the red army, and the Russians can not forgive. Meanwhile, for us, the liberation from German occupation was the beginning of a new, perhaps more cruel captivity — the Soviet occupation which imposed on us a government composed of traitors, deprived our country of half its territory and has resulted in the destruction of the Polish elites.

— Should the Ministry of foreign Affairs to give a decisive response to sharp statements of the Russian Duma?

— I think the most reasonable solution is to hold a meeting of foreign Ministers of Poland and Russia on neutral territory and discuss the most sensitive issues. Avoid dialogue — not a solution, it is time to return to the negotiating table. Of course, this does not mean that we should take Russian rhetoric and position, or to yield to the policy pursued by Russia, but the negotiations in one form or another needs to go. Only such a reasonable approach will give the chance that a conflict or if you prefer, the dispute between Moscow and Warsaw will not affect another sphere.

— Whether, in Your opinion, initiated Poland’s process of elimination of the symbols associated with Soviet aggression to spread to other countries in Europe? Don’t afraid of Russian power?

— Hopes that the example of Poland will be followed by other former Eastern bloc countries or the Visegrad four, in my opinion, is not enough.