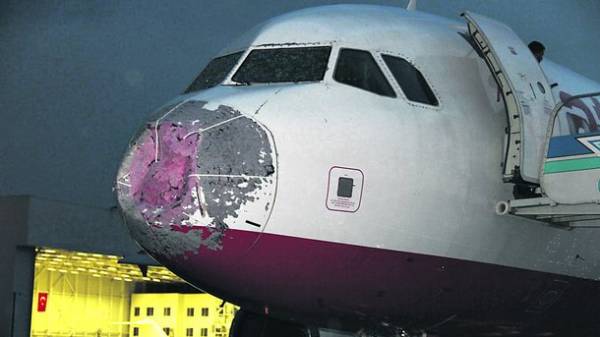 This weekend in true celebrity was the Ukrainian pilot Alexander Akopov, who is almost blind to put passenger aircraft at the international airport of Ataturk. Due to the high professionalism of the commander of one of the people on Board — 121 passengers and six crew members was hurt. In Ukraine, the commander of the crew of the A320 Turkish airlines “Atlas global” was awarded the order “For courage” . degrees. How it was learned “Today“.

Emergency landing happened last Thursday, but became aware of it this weekend. International flight to Ercan (Northern Cyprus) aircraft operated in adverse weather conditions — to Istanbul was hit by heavy storm, accompanied by rain, thunderstorm and hail the size of a large walnut. However, the airport continued to operate and the controllers gave the crew permission to take off. Soared and A320 “Allerglobal”. But at a height of about 4 thousand ft (about 1.2 m), the aircraft was in the area a powerful storm front, which, according to preliminary information, did not show on-Board devices.

As a result, the aircraft received damage to bow, injured the cockpit glazing was removed from the autopilot. In this extreme situation, and given the fact that the liner still had not managed to gain sufficient height, Alexander Akopov took the decision to return in airport of departure, as reported by terrestrial services, which have been put on high alert.

About the difficulties the crew had to sit down, according to rigid production stills — Airbus flies with a strong roll and only the ground takes normal position. Then it will become clear why the commander had landed, figuratively speaking, blind, focusing through the window without opening it because the front glass was badly damaged and only hampered the review.

Despite the incident, the mission ended successfully, nobody has suffered. According to other Ukrainian pilots, the skill of Alexander Akopova applauded the audience on the platform of the airport staff, he was welcomed colleagues, our pilot instantly became a newsmaker Turkish TV channels and world news agencies.

Akopov 51 years, he is a native of Donetsk, has more than 30 years of experience in aviation and almost 14 thousand flight hours. His appointment was a Deputy General Director, head of Department of the airline “Allerglobal”. To contact him, unfortunately, failed.

An experienced pilot of the airline “Ukraine” Ivan Jules told me that sometimes a storm front just can’t get out, “And then ask the Manager to deviate left or right from a given route. Caught in a storm cloud — and you’re either a hero or anti-hero. Akopov came out of the situation a winner, showing himself an experienced pilot.”

But aviaekspert Valery Romanenko said that the situation was to prevent managers: “the Decision to fly is made by the commander, but with the storm not to be trifled with, and everything could end badly, so everything will show investigation.” From Kiev Alexander Maslov wrote in social networks that Akopov was an instructor of her husband, a pilot, and considers it a true professional.

Landing on the water and dead engines

The history of world aviation there are many cases when the pilot determined decision saved hundreds of lives.

So, almost a year ago, in August 2016, the pilot airlines SouthWestAir (USA) managed to land the plane, flying from New Orleans to Orlando, with the collapse of the air motor. Thus he managed to save the lives of 99 passengers and five crew members.

And in 2011, the Iranian pilot landed a passenger airliner with damage chassis and rescued 113 people, flying from Moscow to Tehran.

Finally, in 2009 the pilot for the flight new York—Charlotte took the falling ship with a failed engine from the residential areas and put him on the Hudson river. Already from a sinking car rescue workers evacuated 155 people.

We will remind that on Saturday another incident involving Ukrainians happened over the territory of Central Africa — transport aircraft an-74 crashed an hour after departure from the island of Sao Tome. There were no casualties on Board were six crew members, four of whom received minor injuries. The local police took their tests for alcohol and drugs in the blood, and then sent to the hotel. According to preliminary information, the cause of the crash could become a flock of birds that hit in the right engine during takeoff. The exact reason will establish the Ukrainian Bureau of oversleeve, which went into place.