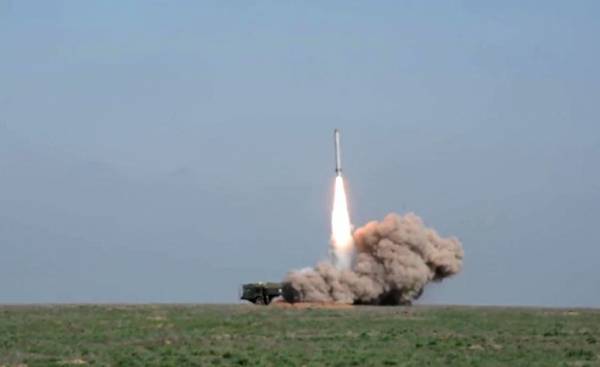 The recently re-intensified debate around compliance with the Treaty on the elimination of intermediate-range and shorter-range between the signatory countries — the United States and Russia. According to experts, the termination of the Contract threatens a return of the cold war, and may also have serious political and military consequences for Belarus.

The essence of the Contract on the elimination of intermediate-range and shorter-range (DRMD), signed in 1987 Mikhail Gorbachev and Ronald Reagan, is the refusal of the United States and Russia from producing, testing and deployment of ballistic and cruise land-based missiles of medium (1,000 to 5,500 kilometers) and shorter (500 to 1,000 kilometers) range.

About a month ago, a group of U.S. congressmen introduced a bill, which envisages the introduction of sanctions against Russia for the violation DRMS, as well as increasing the number of precision-guided munitions, non-nuclear.

“From our side it would be irresponsible to comply with the Treaty, which has long left behind the only party apart from us,” — said the head of the parliamentary Committee on the nuclear arms Mike Rogers. But Senator Tom cotton is suggested not only to withdraw from the INF Treaty, but “in retaliation,” Russia to supply advanced missile technology allies.

In response, the head of the Federation Council Committee on defense and security of the Russian Federation Viktor Ozerov said that in the event of a U.S. withdrawal from the INF Treaty, Russia will take retaliatory measures.

Actively exchanging mutual accusations regarding non-compliance with the Treaty, Moscow and Washington have begun amid the Ukrainian crisis. A point of reference in this process was the Associated Press published in June 2015 that the US is considering the deployment in Europe of land-based missiles for the preventive destruction of Russian arms. The main allegations of Washington against Moscow is as follows.

First, representatives of the American official circles to claim (without providing, however, actual evidence) that one of the cruise missiles, included in the ammunition of operational-tactical missile complex “Iskander-M”, it has a range of over 500 km, which is prohibited by the Treaty.

Second, ballistic missile RS-26 “Frontier”, is declared as Intercontinental (now she is in the process of adopting the strategic Missile forces of the Russian Federation), has been tested at a distance of less than 5 thousand 500 km. That too is contrary to the INF Treaty.

The American side is considering three scenarios for a military response to these violations: the development of defensive tools; preparation of a pre-emptive “counter-force strike” in violation of the Treaty to weapons; creating the possibility of a nuclear attack on the industrial centers of the enemy.

The response claims of Moscow

In Moscow, in turn, argue that American reconnaissance and strike unmanned aerial vehicles (UAVs) Predator and Global Hawk that carry a weapon on Board, clearly fall under the concept of aerodynamic missiles with range from 500 to 5 thousand 500 km prohibited by the INF Treaty.

So, the range of the Predator drone is one — one and a half thousand km, and the Global Hawk — a few thousand kilometers. Currently, the Americans are actively using them to kill terrorists in all the hot spots in Somalia, South Yemen, Iraq, Syria, Pakistan, Afghanistan etc.

The second group claims Russia is that the transport-launch containers for missiles the SM-3 Aegis missile defense system that the United States intend to deploy in Poland and Romania, are identical to those used for the storage and launching of cruise missiles long range. This, according to Russian experts, should also be considered a violation of the Treaty the INF Treaty.

In 2015, the Russian foreign Minister Sergei Lavrov said violation should be considered and that “within the creation of global Washington launched an ambitious program to create target missiles with characteristics similar or close to the INF Treaty banned land-based ballistic missiles”.

Given the above, the threat of US withdrawal from the Treaty more than real, and requires the preparation of an appropriate response, according to a member-correspondent of the Russian Academy of rocket and artillery Sciences Konstantin Sivkov.

The first part of this answer, in his opinion, may be the restoration of the system “Perimeter” dubbed in the West the name “dead hand”. Even in the case of total destruction of the control system of the strategic Missile forces, the system will provide automatic retaliation.

The third fragment — the increase in the number of cruise missiles Kh-101 (conventional warheads) and Kh-102 (nuclear). Their radius exceeds 5,500 km. These systems can be deployed on the territory of Siberia. They can be placed on trailers regular trucks.

In addition, according to Sivkova, you must deploy the combat railway missile complexes, which will be virtually immune to preemptive strike.

Finally, a system of “Status-6” (robotic supercached) can be equipped with warheads extra-large capacity — up to 120 megatons. Their application triggers destructive geophysical processes in the U.S., that would mean their complete destruction, said Sivkov.

Termination of the Contract threatens a return of the cold war

In his opinion, it might bring relations between Russia and the West in terms much tougher confrontation than it was in the middle of 1980-ies in the midst of the cold war. And in Europe, can appear new, more effective ballistic and cruise missiles, which will be located much closer to Russia’s borders.

In response would have to develop and deploy missiles threatening a nuclear strike of the administrative-industrial centers with tens of millions of people, the entire infrastructure of NATO and seaports in Europe.

It is especially important to maintain the Pact of Russia, emphasizes Dvorkin. After all, one only the growing threat of the collapse of the will to contribute to the cohesion of NATO, to increase military spending of member countries of the Alliance, the strengthening of military activity near the Russian border and the worsening of Moscow’s relations with leading States of Europe. Not to mention the unbearable cost to its budget.

With regard to the argument about the threat to Russia devoid of medium-range missiles from States that possess such weapons, Dvorkin believes them to be groundless. In fact, he explains that Russian Intercontinental missiles have such minimum sighting distances that allow you to completely cover the entire range of potential targets medium-range missiles. In addition, long-range bombers of the Russian air force capable of hitting targets at that range without entering the zone defense. Therefore, the tasks of nuclear deterrence — guaranteed.

“In current conditions the Russian leadership, it would be appropriate to take the initiative to take immediate political and diplomatic steps to preserve the stability of the INF Treaty”, — says military analyst.

Belarus could be dragged into a serious military-political conflict

Termination of a Treaty may have serious political and military consequences for Belarus.

In Soviet times on the territory of Belarus is based the largest group of nuclear missiles of intermediate and short range — up to a third of their total number in the USSR. 28 bases were placed 318 271 intermediate-and — smaller range.

First of all, mention should be made of 267 launchers (PU) then the most advanced missile system mobile land-based missiles RSD-10 “pioneer” and “pioneer utth”, or SS-20 Saber — according to NATO classification.

According to official data, according to the INF Treaty between the Soviet Union and the United States as of 1987, the Soviet Union had deployed 405 silos of these missiles, a further 245 were stored in the arsenals and warehouses. Thus, the Belarusian group of deployed SS-10 was the most significant.

Chronicles of the end of the world. The deepest bunker Belarus: don’t search it on the map

But speaking of “the pioneers”, it is impossible not to recall the missile “monsters”, developed in the days of the legendary Soviet designer of rocket technology Sergei Korolev and for a long time (they were armed with almost 40 years) lost in the forests of Belarus. 45 missiles R-12 (SS-4 Sandal) and 6 R-14 (SS-5 Skean).

In the period from 1988 to 1991, in the twilight of the Soviet Union, this Arsenal has been eliminated in accordance with the Treaty on the elimination of intermediate-range and shorter-range. After a quarter-century, the probability of transformation of Belarus into a springboard missile again high.

The response action. Russia may deploy missiles in Belarus

According to some experts, the extension on the territory of Belarus mobile missile complexes (at least the same PTRC “Iskander-M”) can become one of variants of the answer of Russia to deploy elements of the us strategic missile defence in Europe and the extension of NATO’s military infrastructure to its borders.

In the case of heightened tension between the US, NATO and Russia, the Belarusian leadership may raise the question of withdrawal from the Lisbon Protocol and to agree to the deployment of Russian tactical nuclear weapon (e.g. nuclear warheads to “Iskander”) on its territory.

According to the President of the Russian Academy of geopolitical problems, Colonel-General in resignation Leonid Ivashov, in addition to a host of precision weapons (especially cruise missiles “Caliber”) on ships that can accommodate modern aircraft impact means and complexes “Iskander-M” not only in Kaliningrad region but also in Belarus.

“Iskander” in Belarus. Moscow does not remove this option from the agenda

“We could supply Belarus with more modern equipment on favorable terms, to conduct more joint exercises to felt in Poland and in the Baltic States”, — he said.

Well, the joint Belarusian-Russian military exercises already underway. Still waiting for the nomination of “Iskander” in Belarus and equipping the Belarusian army with more modern equipment.