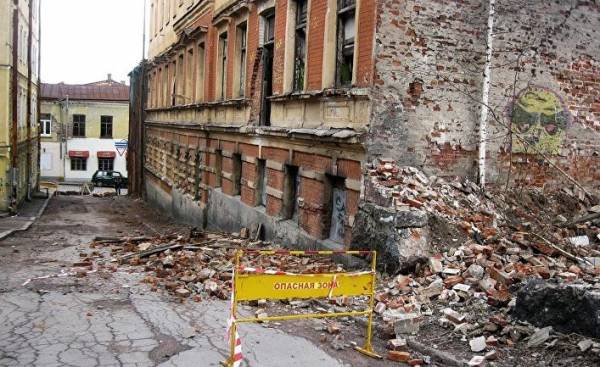 “Buildings come in a very dilapidated state by the time when you start to do anything,” says the architect Viktor Dmitriev.

Destroyed, valuable from a historical point of view of the Central quarter of Vyborg, located near the Clock tower, are going to be destroyed to build in its place a new house in the old style.

About these intentions announced during a visit to the city by the Governor of Leningrad region Alexander Drozdenko and the Deputy Minister of culture Oleg Ryzhkov at the end of June this year.

“Most of the buildings of the quarter were dismantled in 2013. Now there are still some of the buildings at castle street. I think there could be something to preserve, at least, historic facades,” — says the journalists of the newspaper Suomen Kuvalehti architect Viktor Dmitriev, familiar with the architectural heritage of Vyborg.

In the period from 1971 to 2013 Dmitriev participated in various restoration projects in Vyborg, and much has been written about the historical and cultural heritage of the city.

In addition, over 10 years he worked as an inspector in the organization, which is engaged in protection of monuments of history and culture in Vyborg and Vyborg district.

Currently Dmitriev is an expert on cultural heritage of the National Committee of ICOMOS (International Council on Monuments and Sites).

Dmitriev stressed that he had no new plan for the development of the territory.

He suggests that a more precise project will be presented only when a final decision is made, and residents and other stakeholders will be presented with a fait accompli. According to Dmitriev, the buildings are deliberately allowed to reach a hazardous condition.

“Then say that the only option was demolition of buildings, and the requested budget of state money to build new ones.”

Now finally sentenced to the destruction of the old quarter is located in the historical centre of Vyborg, outside the city walls, built in the XV century. The border runs along the Fortification street, Krasnoarmeyskaya street, the Watchtower, and the street Krasin.

Will decided the fate of being in poor condition, but is of cultural and historical value of the buildings of the Old city in the same way?

“In principle, the proposed model of new construction can be used in any area of the city. What happened later can be described as the destruction of the historical center.”

In the Old town there are no public toilet

The article of the newspaper “the Vyborg sheets”, telling about the visit of the Governor and of the Deputy Minister, it is reported that in place of the demolished buildings will be built a cultural center that will host including the theatre under the name “Holy fortress”.

Dmitriev surprised that the theater will be built in the middle of a residential area.

He refers to the fact that in the Cathedral square there is an empty lot, which was formerly a theatre. The future of the site, however, is not widely discussed. From newspaper articles it appears that the new cultural centre will provide facilities for exhibitions and talk shows.

As the newspaper, during a visit to Vyborg Deputy culture Minister Ryzhkov drew attention to two questions.

First, he was surprised that in the Old town there are no public toilets. According to the head of administration of the Vyborg district Gennady Orlov, the reason is that people are opposed to their devices.

In addition, the Deputy Minister wondered why the clock on the Clock tower are not repaired simultaneously with the repair of the tower itself. Clock tower and part of the stone walls remained of the Old Cathedral in Vyborg. St. Petersburg branch of ICOMOS appealed in February of this year the Committee for culture of Leningrad region administration with the issue of the Clock tower.

No reply was forthcoming, but Dmitriev believes that Ryzhkov knows about this letter.

They also discussed and supposedly destroyed buildings under the jurisdiction of the Russian army.

From the article that the Governor Drozdenko complained about how hard it is to find a common language with the army. He expressed doubt that defense Minister Sergei Shoigu correctly informed as to his claim that the premises are in good condition.

The Governor said that in July is going to talk with the defense Minister to take a decision in respect of buildings.

Even the branch of the Hermitage in Vyborg there were problems with the Ministry of defence of the Russian Federation, as it tried to obtain additional space located in front of the Hermitage, and partially run by the Russian army, the building of the so-called General staff.

According to Dmitriev, the dispute in Vyborg is over three facilities administered by the army. One of them is the territory of the old barracks, located between Leningrad Avenue and castle street. Its boundary runs along the Park Esplanade.

The second object is located near the building of the former regional archive, which now houses the archive, Cape Smolyan. The third is the former vocational school at the end of the Fortification street to the Battery mount.

The project discussed at a high level in Vyborg, promises that in the next decade will be repaired all the houses.

Dmitriev has not expressed his views on the ten-year period bring houses in order. But he is adamant about one thing.

“One thing is clear: it will take a lot of money.”

However, not everything in Vyborg is in ruins. Still known throughout Finland Aspila restaurant reopened at its original location in the Park Esplanade.

“I agree with those who think a new restaurant Aspilia the best architectural solution,” says Dmitriev.

For the reconstruction of the Vyborg influenced by the fact that it has become a popular tourist attraction of St. Petersburg. New high-speed train takes You from St. Petersburg to Vyborg in one hour and fifteen minutes.

Besides, in Vyborg a lot of restaurants and cafes in contrast to the small towns located in the vicinity of St. Petersburg.

In Russia on the Vyborg ruins and restoration work is a lot of talk. For example, recently a well-known blogger Ilya Varlamov apologized to the Finns for the destruction of the city.

Special place in these conversations is the accusations and doubts that the money allocated for reconstruction will be spent as intended.