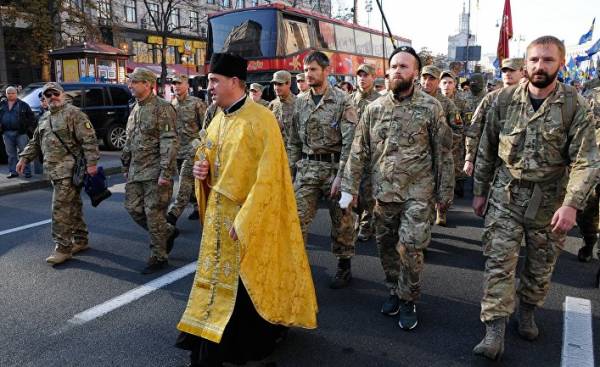 I have bad news that is not news.

In Ukraine there is a real fascist party. Without irony and ernichestva. It is called “Freedom”.

The ideologues of “Freedom” stereotypist ethnic groups and, as a matter of course, promote the idea of the collective guilt and responsibility of the peoples (primarily the Jews) before the Ukrainian nation.

Arguments of the same type — vintage OUN meme “zydokomuna” myth about the Holodomor which was a genocide of the Ukrainian people, and ethnocide of the Ukrainian ethnic group, hosted by the Jews. And “Jewish fascism” and the imaginary Israel, which in their view is not a democratic state, and ultra-nationalist dictatorship (although that is what they are Israel they like, and electoral israelitaly they quietly gets on with cave anti-Semitism). On these topics, they turn any discussion. At least with the Jews: “But we, and you, and you in Israel”…

The people of Ukraine in their heads rigidly divided into “titular nation” and “hostile minorities” “, on which “title” should rule “on their God-given land.” “Pam yatai, cuzineti, here gospodar — Ukrainian”.

Xenophobia — their religion, but anti-Semitism for them is not only the cornerstone of the ideology, but the Foundation of the Ukrainian national identity.

I don’t want to touch the topic of corruption scandals associated with “Freedom”. Don’t even want to remember the speech of Oleg Tyahnybok Javorina and Uman episodes.

But not so long ago Fastovsky district, the führer of the party Yuri Gorbenko famous for his touching recollection of “man with a short mustache, which, unfortunately, has not finished his work.” And this is not an isolated case.

My arm was tired to ban countless Nazi trolls with sobolowski freeparties in the profile. Recently, they defeated nostalgic for the gas chambers and the ovens of the crematoria. Semi-glorification of the Holocaust in slobodskom discourse — a direct consequence of the thesis of the collective responsibility of peoples.

They perceive the facts of participation of Ukrainians in acts of genocide during the Second World war as the prosecution of all Ukrainians in the genocide. And in finding excuses to shift the blame to the victims — Jews, poles, Gypsies.

I have always said — the current generation of Ukrainians are not guilty of the Holocaust. But those who with this event solidaritywith, voluntarily accepts responsibility for them.

I recently got involved in thisbuy mevorach visit Ostap Drozdov. I recalled how he tactfully suggested that I broadcast to speak in Russian, to which I readily switched to Ukrainian. But if he rudely demanded it, I would quit.

In response, I attacked some anti-Semitic lady, who turned children’s writer (not Nicoi). I’m sorry may the French sent a lady known address. What the discussion has entered a Svoboda, who was featured on the cover his picture with “eagle” fahrion:

Taku W udachnii I showed bagato NSA evropeyskih narodu. Sadati, though, Nmachine 30’s Chi Poland seredini 40’s view from the past century. If the Ukraine sagarmala Muscovy, the stench perekineshsya in the service of msklyami.

Who does not Vratsa, then let them shade, predstavnici people yakogo Boule by lutemi nakladace in Osvencim first GULAG.

So. I’m not Mr. Eduard Dolinsky, and even Vice versa. Unlike him, I don’t think Ukrainian nation born anti-Semites. I don’t consider Ukraine a fascist state. I consider Ukraine as a country directed towards modern civilization, a country where there should be no room for any manifestations of cave anti-Semitism and fascism.

I am a citizen of Ukraine, the Jew, perceiving, and identifying themselves as a political Ukrainian and supporter of the struggle, which began on the Maidan and continues to the East.

But sobolowski fascism (fanned, if you believe enough plausible information on the Kremlin loot) already shat Ukraine and turned thousands of corpses (recall what started the “Russian spring”?) And still able to shit so that will not find it.

Maybe I’m wrong. I’d like to hear how the leadership of the party unequivocally dissociates itself from the Nazi rhetoric of its members.

In this case I’m willing to admit your bias and apologize for it.

But so far I have not heard anything even from the very articulate Mr. Tyagnibok about his fabulous statements about how his ancestors heroically beat “jidvei”.

All I hear is the standard “exit market”: “do You want me to say that I’m an anti-Semite?” And this phrase not even completed the seemingly logical: “No, I’m not an anti-Semite”. Instead, a wide smile, and, with a straight face: “And in the Israeli Knesset all party — nationalist”…

It is not nationalism. This neo-Nazism. Prohibited by the laws of Ukraine. Neo-Nazi party in Ukraine should be prohibited. The totality of the hate speech of its members and functionaries in sufficient fact basis. Pro-European forces in the Parliament is unacceptable, “to strengthen the coalition,” negotiating with the cannibals.

First. Among the rank and file members of the party certainly have a lot of decent people, honest and courageous.

Second. Joseph Zissels is undoubtedly right when he says that such phenomena should not fight the Jews, and the Ukrainians. I’d really like to those were found.