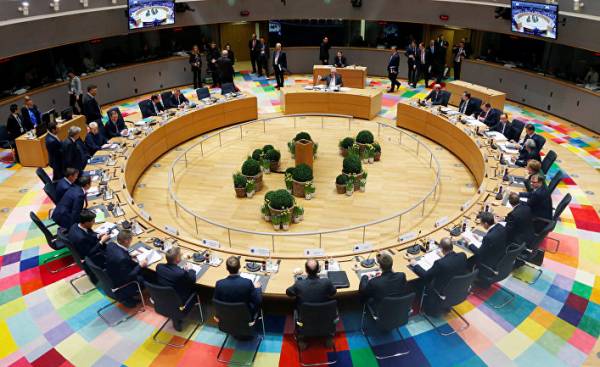 History repeats itself. 60 years ago the founding fathers of Europe was signed in Rome Treaty forming European economic community. But how many now remember that they had signed only a blank page due to delays in printing official document?

At the end of the week already not six, 28 leaders gathered in the Italian capital to mark the occasion, and, perhaps, to think that you need to write to (truly) blank pages in future decades. The fact that Europe today is going through a deep existential crisis and needs to rethink the future.

In truth, the word “crisis” and “Europe” is synonymous with the early days. Contrary to popular belief, the signing of the Treaty of Rome was not welcomed by the Nations unbridled excitement… UES initially started from coal and steel, two sources of multiple conflicts of France and Germany, was the result of goodwill of several people, which left the imprint of the Second world war and was also faced with severe skepticism and even hostility many people.

Born “empirical Europe”, as was the headline of the editorial of Le Monde at the time. This empirical in nature, in which knowledge is obtained empirically, and not as a result of the preestablished plan for a long time allowed the creation of Europe to remain “unidentified political object”, spoke of the great European Jacques Delors (Jacques Delors). Only then one fine day it stopped working.

Europe is in a constant state of crisis for more than ten years after the 2005 French and the Dutch voted against the Constitution.

The state of Affairs on the 70th anniversary it’s the worst: Britain prepares for four days to begin negotiations on Brexia, the American administration is hostile to the very idea of the European Union, euroscepticism and populism are gaining strength and even come to power in some countries, e.g. Poland and Hungary, weak economic growth, endless Greek crisis, disagreement on migrants and refugees, and tensions with Turkey, conflicts at the borders (Syria, Ukraine)… the List is huge, and at the helm of the ship overall, despite all the efforts, never came calling to his trust of the captain.

The situation at the anniversary meeting leaves much to be desired, especially since the position of its members precarious: Francois Hollande only a few weeks, Angela Merkel a few months put his position at stake, Paolo Gentiloni is working very conditionally, the UK will soon embark on a free sailing…

The inevitable decline or the rate for the future?

And yet… Those who do not want to accept the fading light and think that the collapse at such a high price formed a Union will mean a complete hazards regression, can find encouraging signals, even in these difficult times.

The results of the elections in the Netherlands, undoubtedly, showed that the rise of populism is not inevitable and unstoppable, but the failure of Islamophobia and europhobia Geert Wilders (Geert Wilders) to achieve victory does not mean that ideas do not hit the target.

The next step will certainly be elections of the President of France on 23 April and 7 may. Are clearly visible, one of the main themes of the schism, the opposition of the European open attitudes, and national isolation.

Marine Le Pen describes as a struggle “patriots” (her) and “globalists” (mainly, Emmanuel Macron). These keywords vocabulary natsfronta ascribe to him the beautiful role.

However, all can also be formulated as a confrontation of the inevitable decline and bets on the future. The fact is that while hopes for a European lifting associated with the risk and brought a lot of disappointments in the past, but the current situation does not look promising, the candidate of the National front is offering as an alternative exit from the Eurozone (huge price of this process in his speeches, she does not mention) and a return to national borders and customs, which condemns France to regress.

Counter-attack against the rhetoric of fear depends on is not yet guaranteed prospects: following the elections in France and Germany, the authorities should come strongly configured to the rise of European leadership. It is a necessary but insufficient condition.

The strongest signal came from Germany, from the environment as Chancellor Merkel and her rival social Democrat Martin Schulz (Martin Schultz). They are all convinced Europeans and recently held a meeting with Emmanuel Macron, who clearly enjoys the support of the two largest German parties.

One of the most prominent German diplomats, Wolfgang Ischinger (Wolfgang Ischinger) a few days ago, predicted on CNN that the face of Europe will change before the end of the year, after elections in France and Germany, and that it will start climbing. It should be noted that the message passed through the American canal, though Donald trump and considers it a hotbed of “false news”.

This question did not get a clear display in the French election campaign. On the last Monday of the debate, he was raised just after midnight, after three hours of tedious disputes… whatever it was, perhaps, first in it, not Economics or pensions will prove to be decisive for the future of France and its inhabitants split.

It is likely that if in the second round, according to all polls, will meet Emmanuel macron and marine Le Pen, this issue will become a major confrontation. And the rest of Europe will closely follow the development of events, because her fate will be decided on may 7 at French polling stations, allowing, perhaps, to fill the blank page summit in Rome.