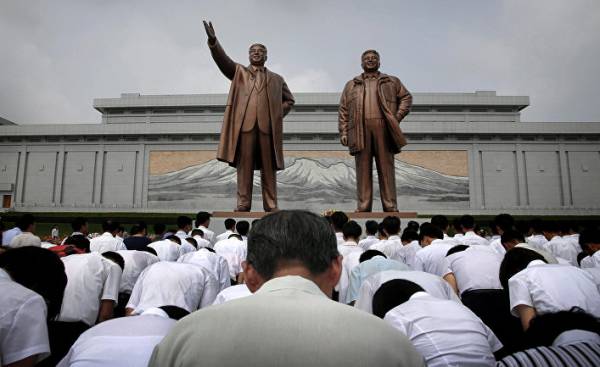 If you listen to the current administration, decide that the United States is a small, essentially defenseless country, which threatens the gang the evil great powers. In the latest national security crisis appears huge, globe-spanning North Korean Empire. The Director of National Intelligence Daniel Coates (Daniel Coats) stated on NBC that North Korea “has become a potentially existing threat to the United States.” In all likelihood, he already sees as tank divisions, aircraft carriers, aviation division and missiles with nuclear warheads under the leadership of Pyeongchang surround the besieged country.

In fact, statement coats amazing. Last year, US GDP amounted to 19 trillion dollars, which equals approximately 650 GDP of North Korea. Her income is comparable to that of Portland Maine, anchorage Alaska, El Paso, Texas, or Lexington, Kentucky. The population of the United States is 13 times more than the population of the DPRK.

The U.S. military in times exceeds the armed forces of North Korea, spending on them a hundred times more. America sets technological standards for the entire world, while resources Korea has outlived its time. With the newest and most technologically advanced nuclear Arsenal and 1411 warheads (the largest of their number reached 31 255 units about fifty years ago), Washington would instantly turn into ashes, Korea. It is assumed that Pyeongchang owns twenty nuclear bombs of dubious quality.

For anyone who is a threat?

Coates is not the only Washington official who is ready to run from the room at the mention of North Korea. Last month, the US defence Secretary Jim Mattis (Mattis Jim) told the Committee of the house of representatives of the US armed forces that North Korea is “the most immediate and serious threat” to peace and security of the planet. The nuclear programme of the DPRK is a “clear and present danger for all,” he added.

General Joseph Dunford (Joseph Dunford), a member of the joint chiefs of staff, warned the Committee, saying that North Korea’s actions represent “a growing threat to the U.S. and its allies.” Indeed, the improvement’s Pyongyang long-range missiles “aimed especially to threaten our Homeland and allies Pacific”.

Americans apparently are listening to. A recent CNN poll showed that 37% of Americans polled believe that the DPRK is “current” military threat to the United States and 67% support sending troops to defend South Korea.

The irony is that the latest results are based on the previous call. If North Korea is a threat to America, is because America first has become a threat to North Korea.

Of course, nothing good about the Kim dynasty, is represented by the third generation, we cannot say. The government brutally treats its people and scares the neighbors. Most Americans would gladly have sent the current leaders of the DPRK to the dustbin of history.

Unfortunately, the North Korean elite know about it. Do not forget that the United States intervened to defend South Korea, following the invasion of the DPRK in 1950, and liberated the entire Peninsula, if the case got in China. Then General Douglas MacArthur advocated the use of nuclear weapons (as against the DPRK, China — approx. transl.): this threat was used which came to power by the Eisenhower administration to conclude a truce.

After the agreements, the United States labour signed an armistice agreement with South Korea (in fact, the agreement is concluded on behalf of the UN, just signed it the American General mark Wayne Clark, and signed it not South Korea, but North in the face of the commander of the kPa Kim Il sung. South Korea to sign a document refused — approx. transl.). In subsequent years, the United States placed a military garrison in South Korea and additional bases, such as Okinawa. In addition, the us government brought to the Peninsula a nuclear weapon, conducted joint military exercises with the Republic of Korea and sent to several units of the Navy, including cruisers, aircraft carriers, and strategic bombers. The US insisted that “all cards were on the table”, meaning military action.

And probably wanted in Washington, North Korean officials have noticed what is happening and is not regarded as a friendly action. Of course, North Korea was dangerous, especially with the military support of the USSR and the PRC. But us military action presented a clear threat to the DPRK regime.

The danger in the United States has worsened by the end of the cold war, when the first Moscow, then Beijing and established diplomatic relations with Seoul. Modern China is helping North Korea to stay afloat economically, but in the past he would not have supported her in the war with the United States. DPRK truly alone in the fight against its southern neighbour with vast resources and support the world’s only superpower. Very lonely.

Well, if Washington was just protecting its allies. However, the Kim regime sees as the us randomly invading countries around the globe. The US administration used military force to promote regime change in Grenada, Panama, Afghanistan, Iraq, Libya and Haiti. The Libyan government was so stupid that getting rid of nuclear bombs and missiles, making the country vulnerable to intervention from outside. The United States also tried to capture the militant commander in Somalia (referring to the warlord Mohammed Aideed, the Farr, who announced the hunt during the Civil war in Somalia in 1993 — approx. transl.), invaded, trying to prevent the disintegration of Bosnia, the split of Serbia and supported by the Saudis during their invasion of Yemen.

If ever there was a state-paranoid real enemy is North Korea.

North Korean officials indicate this reality. Of course, all that said, the government of the DPRK, should be viewed with skepticism, but there is no reason to doubt his concerns of possible military actions of the USA. When I was in North Korea last month, officials rejected criticism of their nuclear program, noting “hostile policy” of the United States and highlighting the military and the nuclear threat (the latter, in their opinion, exists since the 50-ies of XX century).

Undoubtedly, one of the objectives of nuclear program of the DPRK to defend itself from such threats. Nuclear bombs have other uses: for example, to strengthen the position of Pyeongchang in the international arena, strengthen the loyalty of the military regime and to create an opportunity for blackmail neighbors. However, the long-range missiles only one purpose: to keep the US from military intervention in the country.

As for the talk about the fact that North Korea threatens “the world”, she had little interest in this “world” did not show. The Kim dynasty has spent little time scaring Russia, Europe, Africa, South America, Canada, the middle East or Southeast Asia. North Korea always keeps under the gun South Korea, Japan, and the superpower looming over them — the United States.

Tough rhetoric of the ruling dynasty reflects weakness, not strength. They want to meet their virgins in this world, and not in another; none of them intentionally for the sake of fun would not have committed suicide. The DPRK wants to avoid war with the United States, not to join it.

If the US were not “over there behind the corner”, the safest policy North Korea would be ignoring the States. Creating weapons that can reach America, certainly would have attracted the attention of the United States, marking the beginning of the hysteria which has swept Washington. For example, Hawaii today to discuss measures of civil defense in case of nuclear attack North Korea. But with the threat of war, the only viable North Korea policy remains the containment, which means at least a few American cities hostage.

Naturally, the residents of Washington can’t imagine a world in which they do not dominate and cannot act with impunity. However, North Korea does something that does not make other potential adversaries (China and Russia): it deprives US of the ability to use its military forces. Since Kim Jong-UN is a convenient and logical opportunity to turn a couple of American cities in the “lake of fire”, will the United States maintain so-called “nuclear umbrella”, at the risk of Seoul of Los Angeles? Unfold whether a conventional war, will America March on the North to expose Kim Jong-UN and company from Seoul, approaching victory? I dare US all to intervene in an armed conflict, if North Korea feels that may lose their limited nuclear stockpile?

Coates vaguely concerned about the existing threat from North Korea, but this is better understood as normal and permanent danger of bombardment of the DPRK, when the States deem necessary. The North Korean regime, may be cruel, but he did not want war. On the contrary, he wants to make sure that USA will not start a war first.

The best answer for Washington is the elimination of war that she did not need. North Korea long has the resources necessary for their own protection. Despite the fact that its benefits are not as great as the American economy is less than 40 times, and the population — 2 — the inability of South Korea to defend itself demonstrates how the Pentagon has been named Agency of international well-being.

And since South Korea is increasing desire to develop their own nuclear weapons, Washington needs to consider the benefits of the collapse of the “nuclear umbrella” to protect Seoul at the risk zone was Seoul and not, say, Los Angeles or another American metropolis. Non-proliferation of nuclear weapons makes sense, but the US security is more important.

Establish whether North Korea is America? Just because the United States nearly seventy years are “behind the door” in preparation for war with the DPRK. The US should change its policy in northeast Asia to protect, above all, ourselves.