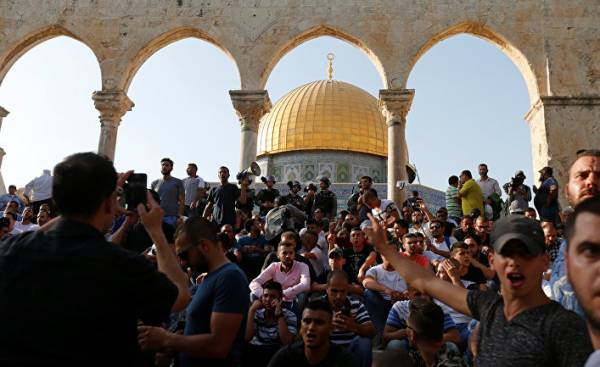 No unrest around the Temple mount, no acts of terrorism in Israel did not evoke any response from the White house. What lies behind the presidential silence? Stop bothering me with your Middle East, the Palestinian-Israeli conflict, I’m not interested in terrorist attacks in Israel. This is the signal to the eloquent silence of Trama in recent weeks. This is as contrasted with the usual, noisy and verbose style of the American President that, at first glance, puzzling. It was three days after the brutal terrorist attack in the settlement of Halamish, but the U.S. administration is not only not condemned the crime, but generally did not react to this event.

Trump is clearly not up to the Middle East, since at home he has a lot of problems. Especially annoying the President that the Republican majority in the Senate not only support his initiatives, but make trump a laughingstock not only in USA but throughout the world. Trump still not able to digest the failure of his attempts to eliminate health reform Obama. This purpose he proclaimed in the first days of his stay in the White house. But this is not the only fiasco of the trump. The Senate supported the strengthening of anti-Russian sanctions, which is absolutely contrary to the policy of the President aimed at rapprochement with Putin.

Trump begins to realize that many of the initiatives that he announced on the eve of his election to the presidency and at the beginning of his tenure, it is impossible to realize — not only because it is opposed by his political opponents, but also because it is opposed by many influential Republican senators. The same fate will befall and fantasy trump that he will achieve peace between Israel and the Palestinians, because it is not in his power. Trump is not the man who admits to his mistakes.

And so a natural reaction is silence.