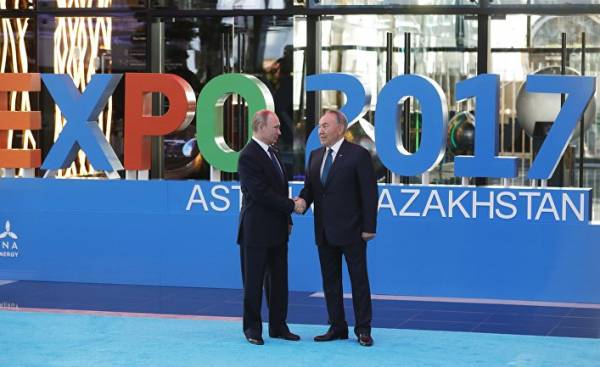 Kazakhstan before the end of 2017 is going to switch from Cyrillic to Latin. About it on July 26, said the Minister of education and science of Kazakhstan Erlan Sagadiyev, who also said that formed in April, the Commission is working to create a more convenient Latin alphabet. Decree of the President of Kazakhstan Nursultan Nazarbayev to 2025 all publications, documents, road signs in Cyrillic alphabet should be replaced with Latin.

It is the decision of Kazakhstan is an obvious response to the statement from the sixth of July the Minister of education and science of Russia Olga Vasilyeva, who said that the CIS should all go to a single Cyrillic. “The last ten years a very large topic was the romanization and arabization of fonts. Now we should return to a single font in the CIS is font Cyrillic, because surveys of our population and the population of the near abroad still talking about attachment to the Cyrillic alphabet and the necessity of transition to the Cyrillic script,” — said Vasilyev.

Astana, in fact, gives a belated, but principled and tough response Vasilyeva, not only abandoning the idea of a unified Cyrillic alphabet, but also determining the long — term target by 2025 all public correspondence to translate the Latin alphabet.

Of course, there is no doubt that the real goal is not the answer Vasilyeva, and the idea of switching to Latin alphabet in Astana was a long time ago. In this case Kazakhstan only repeats or resembles their strategy.

And this strategy is quite simple — Astana, being very careful with Moscow on this issue, given the threat of the Russian population, and hence the “Russian world” in Kazakhstan, however, is fundamentally trying to implement a sovereign policy and form a kind of modern Kazakhstan, which is not consonant with the “Russian world”, but with real, modernizing, as noted by Armenian experts, experiencing the fourth industrial revolution world.

Of course, this image does not fit lifetime presidency Nazarbayev and, in General, the cult of his personality, but in this case, the problem is the nuances arising from local customs, geographical characteristics, demographic composition of the country, which keeps Kazakhstan, and therefore the regime of sovereign Kazakhstan, no matter how it seemed strange.

That is, this step Nazarbayev, almost, not anti-Russian and Kazakh, in tune with the trends of the modern world, is aimed at harmonizing Kazakhstan with these changes and maximize the opportunities for its development.

But the question becomes “anti”, for example, in Armenia, from the point of view of wittingly or unwittingly serving the apologetics of Russian politics and propaganda of people who believe “Russophobia” protection of the Armenian language, the negative public reaction to the expansionist statements of various officials in Moscow to issue the Russian language, thus distorting the issues and blurring the question of responsibility.

On the other hand, these steps makes “anti-Russian” by and large, Russia itself, which is trying to preserve its “area of influence” is not support in the processes of development and modernization and the logic of club or axe.

Russia, as powerful and influential, is not responsible for civilizational competitiveness and the security of their zones of influence, and becomes extremely irresponsible, not sparing different that sounds from the mouth of its officials in the subtexts which contains obvious blackmail. This shows the backwardness of Russia, the weakness of mere “impotent despotism” instead of leadership.

This situation leads to the fact that almost everything that happens in nature, is assessed as “anti-Russian”. In the case where these officials are a manifestation of Russophobia his statements and actions, as well as advocates, protecting them from natural reaction with her Breasts.

As they say in a famous film in Soviet times, “it’s not me going against the flow, and the flow is against me.”