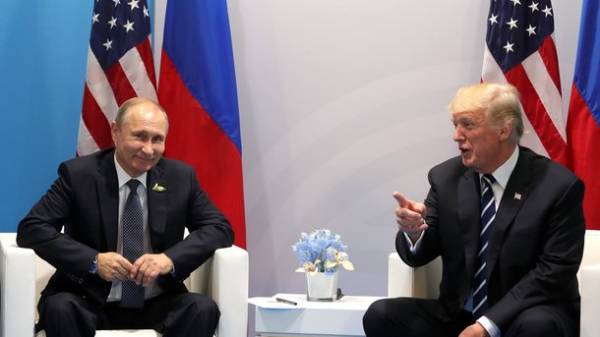 The US is preparing to tighten sanctions against Russia. Today Congress will consider a bill on sanctions against Iran and North Korea, which also provides for the introduction of new restrictions against the energy and financial sectors of Moscow. It remains a mystery whether his zavetiruet Donald trump, because his Administration have repeatedly spoken out negatively to the project, asking to remove from it the provision that without the consent of Congress, the President can neither weaken nor to cancel anti-Russian sanctions. Moreover, Congress offered to make another bill about the defense in 2018. It provides for the imposition of sanctions against Moscow for breach of Contract on liquidation of rockets of small-and medium-range nuclear forces (INF), and also proposes to increase the costs of developing a new cruise missile ground-based medium-range missiles in response to posted Russia “Iskander” in Kaliningrad and Crimea.

This year the INF Treaty marks exactly 30 years. In his 1987 December 8, was signed by Gorbachev and Reagan agreed not to produce, not to test and not to deploy ballistic and cruise missiles, ground-based medium (1000 to 5500 km) and small (from 500 to 1000 km) range. Three years after the entry into force of the Treaty, the US and the USSR had to destroy all launchers and rockets of terrestrial basing with a range of 500-5500 km, including missiles in the European and Asian territories of the USSR.

The first, in fact, violated the Treaty by Russia. “Russia is seeking not only to have nuclear weapons, and a whole range of weapons, and part of special purpose and conventional armed forces, it seems to me that such a Russia and trying to create Putin. In addition to nuclear weapons and special forces they are trying to modernize and Navy. Now it is present in the Mediterranean, and in different oceans, and on such a scale, not seen in the last 20 years,” said former U.S. Ambassador to Ukraine Steven Pifer.

Mutual claims. Even during the Administration of Barack Obama, the U.S. has repeatedly accused Russia of violating the INF Treaty. A new round of scandal has received since the inauguration of Donald trump. In February, the New York Times reported that Russia has secretly deployed a new cruise missile. “Administration officials said that in Russian there are two divisions of proscribed missiles. One of them is on the Russian test site of Kapustin Yar in southern Russia near Volgograd. Other in December (2016 – Ed.) moved from this site to base of operations elsewhere in the country. American officials called the cruise missile, the SSC-X-8. But “X” were removed from intelligence reports, which means that the missile system are already in development and may be ready to use,” wrote the New York Times.

A day later, Reuters, citing its sources in the White house reported that is prohibited by the INF Treaty cruise missile Russia has developed during the Administration of Barack Obama. According to the publication, we are talking about cruise missiles medium-range missiles with nuclear warheads, looks very similar to the operational-tactical missile complexes “Iskander”.

An official comment to the state Department delay did not, accusing Russia of violating the Treaty. Moreover, in the third edition of the report “Post-Truth, Post-West, Post-Order?”, published on the eve of the 53rd Munich security conference (where he had been Minister of foreign Affairs of Russia Sergey Lavrov) said that in the Kaliningrad region, Moscow has placed tactical missile complexes “Iskander-M”, whose range exceeds that allowed by the INF Treaty 500 km.

“At the moment, several types of missiles “ground-air”, deployed in Kaliningrad, covers the range, at least up to 200 km. Russia also reportedly has tested and can put to the ground based cruise missile, which Washington regards as exceeding the lower limit medium-range missiles under the Treaty and therefore in violation of the Treaty. Their potential range of – 1500 km”, – stated in the report “Post-Truth, Post-West, Post-Order?”.

Probably talking about cruise missiles “Caliber” (with a radius of 1,500 km), which Russia plans to deploy in Western and southern military districts. According to Russian media reports, at the end of 2015, the Kremlin’s “tested” them in Syria, firing from ships in the Caspian sea. But according to CNN not all missiles hit the target. At least four of them flew to Syria and fell on Iran. And in the United States has repeatedly questioned the range of the missiles “Caliber”. But the Kremlin’s plans to place in Kaliningrad, the Western and southern military districts such missiles (they can carry nukes), yet a cause for concern overseas. After all, only posted the “Iskander” in the Kaliningrad region with a radius up to 500 km “fetch” to Copenhagen, Stockholm and Berlin. And missiles “Caliber” “capture” almost all of Europe. 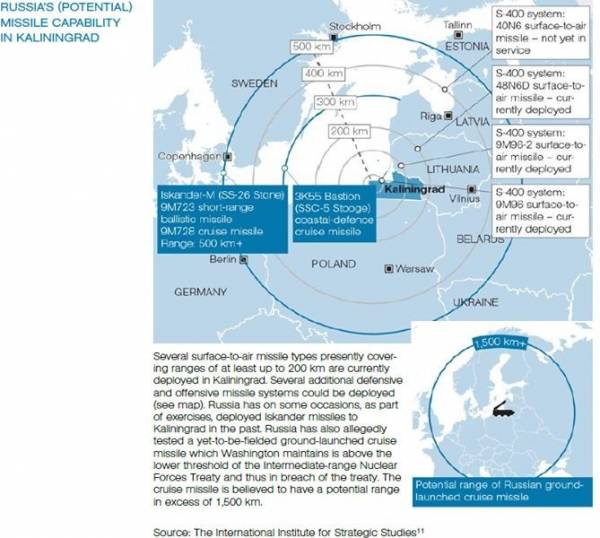 In the Kremlin denied the charges, Recalling the counter-claims. In the Russian view, under the ban of the INF Treaty covers all us drones with a range of over 500 km, hosted launchers MK-41 in connection with the construction of missile defense facilities in Romania (where, according to Russian, if you want you can place a “Tomahawk”), high-precision cruise missiles of class “air-surface” JASSM-ER extended range for F-16 aircraft. Also, according to Vladimir Putin, the former Russian leadership has gone to the elimination of medium-range missiles, land-based, but the Treaty has not affected the medium-range missiles, air and sea-based, which the USSR had and the US has remained in service. 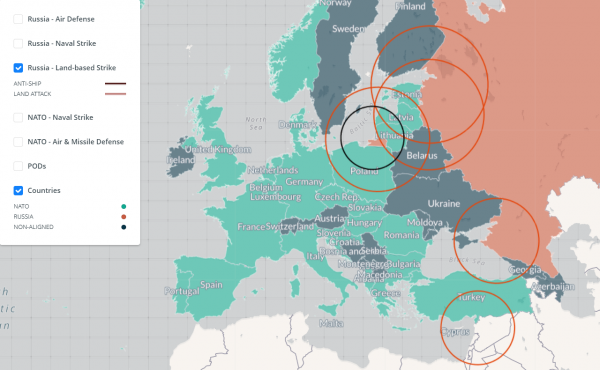 Response. Almost six months ago the senators-the Republicans Tom cotton and Marco Rubio, and Ron Johnson proposed to respond to Russia: send $500 million to strengthen the defense, and to develop new cruise missiles and medium-range missiles on the basis of “Tomahawk” (ground-based launchers and land-based missiles were destroyed under the INF Treaty). And in order not to violate the Agreement, the technology development can be passed to allies in Europe who are not in the Contract. 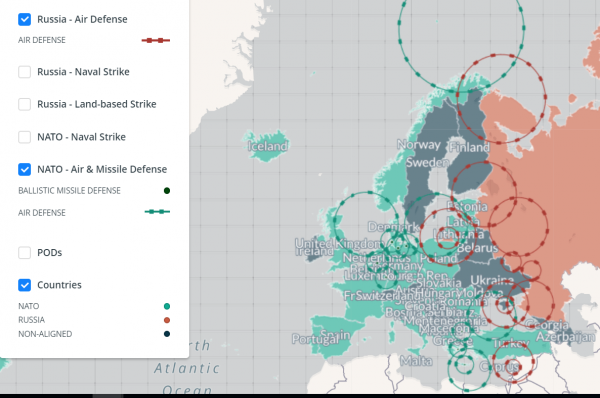 “According to the state Department, Russia is testing a cruise missile, which can strike at Eastern Europe, at least since 2008. It is already 9 years old. The Obama administration has repeatedly demanded Kremlin to stop these tests. In 2014, the state Department official said that Russia had breached the Contract, and every subsequent year after. However, Moscow did not react to the violation. So no one was surprised when the media announced the deployment of two Russian divisions with ground modifications of cruise missiles and medium-range missiles. The truth is that this behavior of Russia is not news, as in the Soviet era and the Putin era,” said Tom cotton.

But the idea of senators, according to American analysts, accounts for the sharp decline in the defense budget and the cost of upgrading. The report of a Cent for strategic and international studies (CSIS), who last week was presented in Washington, said that for the 2008-2015 modernization of the army was reduced by 74%, 52% of which occur in the sector of research and development. According to senior researcher CSIS Andrew hunter, Congress is often difficult to explain why financing the modernization of the army and sectors of research and development should be increased. “Tight” budgets under the law on the control over the budget from 2011 also limit upgrades,” added hunter.

Can solve the problem of the adoption of the bill on defense for 2018. There is written that the U.S. can withdraw from the INF Treaty if Russia within 15 months after the entry into force of the law will not return to compliance with the Treaty. The project also envisages the allocation of $50 million to develop a new missile, of which $25 million invested in research and development work on the creation of American medium-range missiles. Moreover, the Chairman of the Committee on foreign Affairs of the house of representatives ed Royce introduced an amendment to the bill on the defensive, which prompts you to enter against Russia new sanctions for violation of the INF Treaty.

In the Federation Council of the Russian Federation have hastened to threaten the deployment of new missile systems is prohibited. “It’s a pretty absurd move from the point of view of security of America’s allies and the US itself: the response of Russia – and they are in this case, no doubt, will follow – would have made our medium-range missiles in the European part of the country, strategic from the point of view of threats to Europeans. In this case, the strategic nuclear forces of Russia would have remained a factor affecting strategic security of America itself”, – commented on the draft law on defense, the head of Committee of the Federation Council of the Russian Federation on the international Affairs Konstantin Kosachev.

However, according to American analysts, the adoption of the bill on defense for the year 2018 in the current version is strongly opposed to the Administration trump. The fact that individual initiatives of congressmen and senators have not yet been discussed at a higher level with European allies. And given the popular in Europe, sentiment against nuclear weapons, a consensus on this issue to achieve would be extremely difficult. But to start a dialogue is still necessary, because, according to CSIS, if Russia continues to violate the INF Treaty, the Russian missile potential risks to exceed the return of the American and European capabilities. 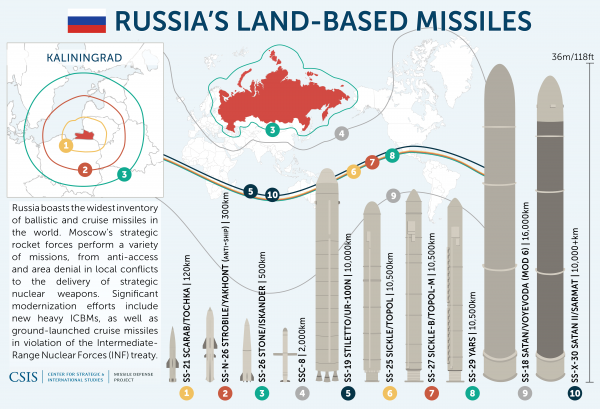 *Russia has the world’s most extensive supply of ballistic and cruise missiles. Strategic missile forces Moscow to perform various tasks. Moscow is making significant efforts to modernize and develop a new Intercontinental ballistic missile, breaking the INF Treaty. For example, the range presented in the infographics missiles “Iskander” in modification of “Iskander-M” deployed in the Kaliningrad region, the Agreement exceed the permitted 500 km.