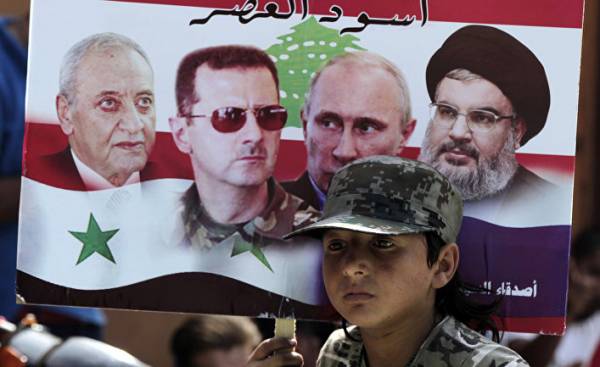 No one can discuss the huge impact of Russia’s intervention in the civil war in Syria. After 15 months, signed a historic resolution, changing the balance of power and increasing the weight of the Syrian regime in confronting the six States. They put all the military, financial, and informational efforts to destroy and tear Syria to pieces, working into the hands of the Zionists and their patrons.

Yes, this is the right word. Russia acted effectively in the Syrian war and has achieved impressive results. Moscow has shielded Damascus.

Terrorism faced by Syria, began to threaten the “Muslim part” of Russia. He could move through Erdogan’s Turkey through a conspiracy trying to realize the ambitions of the Ottoman Empire. Therefore, the Russian intervention in Syria were primarily driven by the need to protect Russia’s national interests. We didn’t know her true intentions. The war in Syria has become a gold mine, which helped Russia destroy the unipolar world led by America, particularly after the collapse of the Soviet Union.

However, the Minister of foreign Affairs of Russia Sergei Lavrov said: “If we had not entered Syria, the regime would collapse in two or three weeks”.

It would be possible to choose softer words. Such emotional statements are rarely heard from representatives of the Russian diplomatic corps.

The Syrian government refrained from making official comments and statements in the media, despite the outrage and indignation caused by these “arrogant and condescending” words. But the answer came in another place.

Ally Russia gave the message that in fact any agreement on a ceasefire with any of the parties without the return of power to the Syrian leadership and coordination with it of action does not exist and is not required the Syrian army and its main ally in the region Hezbollah.

Iran supported the Syrian position and intensified its military and material support to the Syrian army, and also sent new fighters.

The message was eagerly taken up by the Russian side. In just a few days ago, President Putin spoke in the Kremlin with the following requirements:

“Thousands of militants from Chechnya, Kyrgyzstan, and Uzbekistan are fighting in Syria. This directly threatens the national security of Russia. That is why we always coordinate our actions with the Syrian leadership, the Syrian army and reserve forces to carry out our operations against the common enemy, which is equally threatening Russia and Syria. We work as a team with our allies.”

These words were spoken to first, to neutralize the effect of the words of Lavrov, and, secondly, to bring the hidden apology to the Syrian government.

Then followed the Russian-Chinese veto. This was the culmination of joint action on common interests, building trust and overcoming arrogance and pride.

Finally, the last about the words of Lavrov…

He said in his speech:

“Of course, the big influential players who pulled Syria in confronting terrorism, won a great victory. But the best that was in these victories is durability, demonstrated by the Syrian people, their patience and the sacrifices he went… the resistance of the Syrian army and its heroism… it all strengthens the Syrian leadership and his courage…”

This is the power and simplicity of. This is the loyalty and generosity. Men say, who know the force. This Seyyed Hassan Nasrallah.