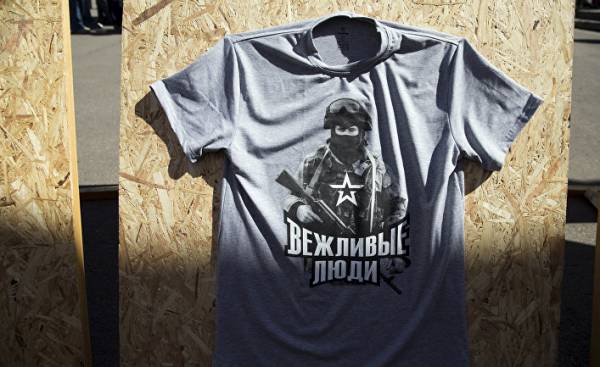 The mechanism of Russian operations in the Crimea and the sluggish reaction of Ukraine became the experience that, in the opinion of experts cannot be ignored.

In March 2014, when Russia annexed Crimea, the Peninsula has again placed himself in European history. Three years after those dramatic events Jyllands-Posten back in a hot spot.

Soldier-commando in full gear, with a gun casually slung over his shoulder, receives a bouquet of flowers from a little girl whose cat loves it. rubs against the foot soldier.

“”Polite people” from the grateful residents of the Crimea” written on the monument erected in front of the Crimean Parliament building in Simferopol, the somewhat sleepy capital of the region.

That day, the Russians began to seize the Ukrainian Peninsula in the Black sea. Thus in modern European history began a new Chapter.

“Polite people” — a Russian euphemism for a military that secretly were sent to the region to destabilize it and to prepare for the annexation of the Crimea.

But, according to eyewitnesses, more than 50 armed commandos who occupied the Parliament building in Simferopol February 27, 2014, did not behave very politely.

They were “bulletproof vests, night vision goggles, armed with precision rifles, machine guns and heavy grenade launchers. These units could reflect the first Ukrainian reaction, and they were supported by units of the Marines on the Peninsula,” writes analytical center Rand in a new review of the Russian tactics during the annexation of Crimea.

The unrest on the Peninsula began a few days earlier, when the South, in Sevastopol — based Russian black sea fleet held large demonstrations against the government in Kiev. Soon the mayor of the city was replaced by a person loyal to Russia.

In the East of the Peninsula, in the port city of Kerch at the narrow Strait leading in Russia, also held Pro-Russian demonstrations involving several thousand people.

At that time, the Kremlin has lost the struggle for power in Kiev when former President of Ukraine Viktor Yanukovych after the carnage, which killed the demonstrators fled to Russia.

This has made Vladimir Putin out of the box the old plan. Probably the plan was originally developed in the early 2000’s and involved the occupation of a thinking mainly in Russian Peninsula with the use of the black sea fleet and the additional forces from outside.

In the night from 26 to 27 February, the plan was implemented.

“Over the Kerch helicopters appeared, at the ferry port was docked transport vessels “polite people” on Board”, — says Konstantin Ermakov, local Pro-Russian activist from the port city.

Rebels and gangsters found each other

Military moved on to the Peninsula — not only in order to take control of some key facilities, but also in order for the strongest to push the political process.

It was, in particular, about how to collect local Parliament in Simferopol: “the Rebels were supposed to gather deputies, to drive them into the hall to vote. So this has happened” was Russian TV Igor Girkin, a legendary intelligence agent who took part in the management of the operation.

He arrived in Crimea on 21 February before decided what will end the crisis in Kiev to “twist arms” of the local. Because although the Russian propaganda at the time claimed that the driving force of the process was local activists, supported by politicians of the Peninsula, it was very far from reality.

“Sorry, no support from state authorities in Simferopol where I was, I did not get. No support was not”, — said Igor Girkin.

But it came on the other hand, emphasizes mark Galeotti (Mark Galeotti), expert on security issues related to Russia, from the Institute of international relations in Prague.

Because part of rushing into battle commandos of the elite Ukrainian unit “Berkut” who fired on demonstrators in Kiev, moved to the Russian side.

And Moscow is, according to Galeotti, was recruited into its ranks criminal elements of the many mafia gangs in the Peninsula — “unidentified thugs in ill-fitting on them camouflage uniforms and with red bracelets, but — nonetheless — often with modern rifles,” he writes, analyzing the events.

About how to draw gangsters, cared for, presumably, the Russian security service FSB.

“Local sources claim that the talks between the political elite of Crimea and many of the Slavic criminal gangs immediately before the crisis that preceded the annexation was initiated by the FSB,” wrote mark Galeotti.

But Pro-Russian forces in the Peninsula was not as strong as it would like Moscow.

Before and after Putin’s lies

First, a referendum on who should own Crimea — that would give the whole event some semblance of democracy — it was decided to hold 25 may. But under pressure from Moscow, the referendum was rescheduled for March 30, and then on March 6, after which the outcome was a foregone conclusion, especially because the local media and the vote counting was in the hands of the Russians.

• A Peninsula in the Black sea area of 27 thousand square kilometers.

• It has a population of approximately 2.2 million people. Almost 70% — Russian.

• The two largest cities, the administrative center of the Peninsula Simferopol and the port city of Sevastopol.

While Russian troops have taken control of Crimea, the Kremlin turned its propaganda machine on full throttle.

If you believe that story, which Moscow has led a “carpet-bombing” his own people, and Russian-speaking Ukrainians, the authorities in Kiev took over the “fascist junta” that threatened the lives of inhabitants of the Crimea.

At the same time, the President of Russia Vladimir Putin at a press conference on March 4 denied the allegations of Russian troops in the Crimea and the existence of any plans for the annexation of the Peninsula (even though it happened two weeks later).

The fact that Putin lied is a fact, but there are different opinions about why he did it: “it’s Unclear whether Russia aspired to the annexation initially or the Crimea it was decided to Annex after Moscow claimed the Peninsula without a fight and thereby decided the immediate task is to separate the Crimea from Ukraine”, — is written in the report of the analytical center Rand.

“Perhaps the Russian leaders first expected reaction to the invasion of Crimea in the country and abroad, before it was decided to proceed with the annexation or other political event,” such is the opinion of the analysts of the centre.

It draws attention to a very limited Ukrainian resistance to the West, which, it seems, wanted to mute the reaction of Kiev.

Weakness can be costly

Because what happened in Crimea happened despite the fact that Ukraine originally was clearly superior to the invading Russian forces and numerically, and in terms of weapons.

According to the Rand report, Ukraine at the beginning of the conflict had in the Crimea 18.8 thousand soldiers equipped with heavy weapons, while the Russians had about 12 thousand military on the black sea fleet, but almost no heavy weapons.

And among the rebels were not all then convinced that the action will succeed.

“The plan was to retreat to the Crimea and dig in Sevastopol (South-Western tip of the Peninsula — approx. JP) — told one of the Pro-Russian activists of the Moscow “Novaya Gazeta” earlier this year.

A military analyst believes that the response of Kiev reflect the situation in March 2014, when the Ukrainian government and the country’s army was on the brink of chaos. In such a situation, one could hardly react otherwise, that is his rating.

“From the Russian side it was a very well-planned action, so that regardless of the Ukrainian reaction, the outcome would be the same, only the human victims would be more,” says Alex Miller, Director, international security program, the analytical Razumkov center in Kiev.

Several episodes talking about the fact that on both sides there were many well-armed and ready for all men, and given this, it could be much worse. Shooting in connection with the occupation of the Russian military facility near Simferopol led to the fact that two people were killed, a Ukrainian restraint prevented the aggravation of the situation.

But although relatively bloodless outcome of a conflict can be perceived as a success — in particular, given the subsequent bloody conflict in the East of Ukraine — it has led to certain problems.

The report of the analytical center Rand indicates that misunderstood Russian intentions and advice to Ukraine not to respond to force with force has created a serious strategic problem.

Ukraine gave the Crimea: from the West Moscow had received a signal that in such a situation, when a takeover occurs secretly and quietly — resistance is not provided immediately.

“Due to the fact that Ukraine and the West in the critical first week, when Russian troops occupied the Crimea, and reacted slowly and gently, it is likely that Moscow will use similar tactics in the future” — this is the conclusion made in the report.

There is a risk that the combination of local support, massive propaganda and Russian agents can be used almost everywhere in the former USSR, the authors of the report.