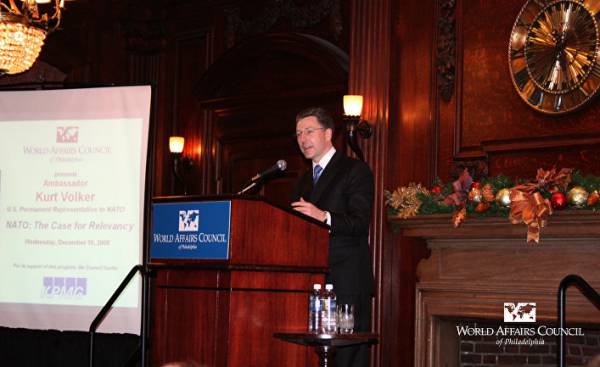 After the summits, backroom diplomacy and flirting over dinner there is hope for a new peace process in Ukraine.

Three months ago it looked worse, there was no sign of any movement. On the contrary: military operations at the front became more active, both sides regularly violated the cease-fire, using heavy weapons.

During a meeting at the White house in March President Donald trump made it clear to German Chancellor Angela Merkel:

“What is happening in Ukraine — the case of Europe,” said trump, according to sources of the Washington Post.

Last weekend showed that trump has completely changed my point of view.

On the contrary: it seems that the administration trump more than Obama by the end of his presidency, is keen to find a solution to the conflict in Ukraine.

1. An example appeared at trump’s interest in locating out of the war in Ukraine was the appointment on Friday, “heavyweight”, Kurt Volker (Kurt Volker), former U.S. representative to NATO and Director of the National security Council, special representative of the President of Ukraine.

2. On the sidelines of the meetings, Russian, Ukrainians, French and Germans have agreed on a new summit on Ukraine between Putin, Poroshenko, Merkel and Macron. It will take place in the summer.

3. Weekly reports of the Organization for security and cooperation in Europe (OSCE) show that during the recent summit of heads of state and government, the number of ceasefire violations has decreased significantly.

Trump has sent to Kiev his man

However, the war, which claimed 10 thousand lives, shows that things can change quickly. In early June, in a short time killed seven Ukrainian soldiers.

New man trump will stay in Kiev to continue the work on “implementation of the Minsk agreements”.

Previously, Walker advocated that the US was supplying weapons to Ukraine, which would mean a strong escalation of the American involvement and defeat Putin.

“Because he’s a real hawk, here it is welcome,” said political analyst Konstantin Batiki in an interview with the Kyiv Post.

Stoltenberg: there is still a lot

The next day after the meeting of “twenty” the Secretary of state trump’s Rex Tillerson and NATO Secretary General Jens Stoltenberg went straight to Kiev.

“Russia should take the first steps towards de-escalation of the situation in the East of Ukraine,” — said Tillerson and added that “the war was planned and initiated by Moscow.”

Poroshenko received clear assurances that the US and NATO support Ukraine. Stoltenberg has promised an aid of 350 million crowns, in particular, for new satellites and equipment to fight against the Russian attacks.

“But Ukraine will have to go a long way,” said Stoltenberg, the Ukrainian newspaper Kyiv Post and added that in order to reform the country, remained insufficient.

And Stoltenberg, and Tillerson said that the only solution is to implement the Minsk agreement, which Kiev strongly oppose.

The reason is that this will mean some degree of autonomy for the rebel regions, and the majority in the Ukrainian Parliament did not agree.

If you believe the Kiev and NATO in Ukraine are still about 4 thousand Russian soldiers, which the Russian side still says “volunteers” and which, moreover, often occupy key positions in the army of the separatists, part of a total of 40 thousand people.

From Russia to the army of the rebels in Lugansk and Donetsk continues to stream weapons, equipment and money.

The second Minsk agreement was signed on 11 February 2015 between Ukraine, Russia, France and Germany.

The agreement was supposed to lead to peace in Ukraine, their implementation was to monitor observers from the OSCE. Two and a half years later, the agreement systematically and frequently violated — by both parties.

However, in their report of the OSCE reported that most often violates the agreement and impede the work of the observers, Russia-backed rebels.

1. The agreement called for a complete ceasefire and withdrawal of heavy weapons to a distance of at least 50 km from the front line.

2. After the truce party was to begin discussions about free and democratic local elections in accordance with the electoral law of Ukraine.

3. The Ukrainian authorities were supposed to gain complete control over the borders, all Russian troops were to be withdrawn from the territory of Ukraine.

4. The agreement also included the introduction of a law on interim self-government in the breakaway republics.

5. In addition, provided for the Amnesty and exchange of prisoners.

The agreement was criticized for that a lot of them were obscure and complicated, the political majority in Kiev speaks against important parts of the agreements.

After meetings in Kiev on Monday, the Ukrainian press Secretary (SIC — approx. ed) said that the overriding goal now is ensuring the ceasefire and withdrawal of heavy weapons from the front line.

However, the parties, and primarily the Russia-backed separatists must stop trying to prevent the OSCE monitors to do their job. In April, one of the OSCE personnel was killed and two were wounded, he stepped on a mine during the inspection controlled by separatists areas.

In Moscow, foreign Minister Sergei Lavrov said that Russia will go to the deployment of international peacekeeping forces along the front line, which Ukraine has resisted, fearing that the front line will be permanent.

Although Russia officially claims that sanctions have not caused much damage, the restrictive measures have had a significant impact.

In order to quickly emerge from the economic crisis, Russia needs investment and technology, and this requires a lifting of sanctions.