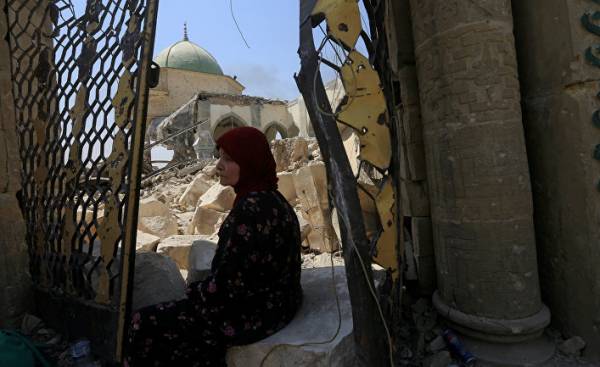 The Golden brigade, a unit created by the Americans, fought on the front lines in Mosul, which was recently liberated from ISIS (banned in Russia organization — approx. ed.). Division talking about a large number of casualties and wounded in their ranks, but they also took and prisoners. Now should have received a permission to visit of a special group of detainees, women who were discovered in the West of Mosul.

Among them — during the last days of this writing the media around the world — have the Germans, including 16-year-old Linda W. of Saxony. Her photo, which she covered in dust from the ruins of the Iraqi soldiers, went around the world. Berlin have official confirmation that Linda V. and up to four other Germans are in the hands of the Iraqi army.

Linda V. wants to go back to Germany

They are here, and two are in the barracks. They sit on metal chairs in a medical office where you would normally check the suitability of the recruits of the Golden brigade. Their faces pale and stressed, and hands. Coverage of all parts of the body in the Caliphate prevents any sunburn. Them looking Iraqi girl soldier next to them three American nurse and an American soldier.

Linda V. beige variegated shawl and cloak, legs long pants. She was tired of the war, all the weapons, suffering, she says. She wants to go back to Germany. She hid in the basement next to the Tigris river flowing through the city. In the basement she was the only German. Initially after her arrest, took over tidco, she says. Many fighters ISIS believed the women of the Kurdish minority slaves. She was nervous. “I’m German”, she said to the soldiers. Then she had to remove the handkerchief and allow to take a picture.

Linda V. slightly wounded, gunshot wound in left thigh, also damaged right knee. Probably he was hit with a shrapnel fired from the helicopter missiles. In General, it had to be taken to the hospital in Baghdad, but then were told that there will not be able to guarantee her safety. In the hospital for treatment is a lot of the victims of ISIS. So she was taken to the base of the Golden brigade.

A Chechen woman, crying, kissing your phone screen with photos of your children

Near Linda V. sits Fatima M. from Chechnya in 15 years, she has appeared in Austria, married a German and moved with him to Baden-württemberg. Her husband, Mohammed A. was killed in the battle for the Caliphate. She has a badly hurt arm, the American nurse says that may be able to save her arm. Fatima M. crying, both her kids went missing during an air strike. Reporters NDR, WDR and Suededeutsche Zeitung showed old photos of her children, who received from her family in Germany, she releases the phone from his hands and, weeping, kisses the display.

The Federal intelligence service (BND) attempts by the joint efforts of the German foreign Ministry to return the women home. Iraqi security forces a few days ago gave lists of names of detainees. Responsible for the case the judge said that they have not yet interrogated, he only appointed medical treatment. During a conversation between the reporter and them in the room is the Prosecutor. There was a lengthy discussion, is there the possibility of a visit, the prisoners are the object of attention of policies, here not only the Germans, at least, one French, Moroccan and several children.

Perhaps they are a lot more doors adjacent medical room rooms remain closed. One soldier says in the hallway: “First they kill us, and now we buy their children diapers”. In Mosul recently had a lot of bombers. Some approached the soldiers with children in their arms, and then brought into action an explosive device.

Women and children of the defeated fighters of ISIS surrender

In the distance are constrained by the fighters of ISIS, some of them sentenced to death. In Mosul, as the officers of the Golden brigade, there’s a growing number of women and children of defeated soldiers of IG, some give up, others find in the underground tunnels and basements. Men looking for a fight and death. The majority of women trying to survive with their children.

The judge agrees to a meeting with a reporter because he works for the Iraqi TV Iraqia TV. However, it is crucial that journalists from some time are in touch with the family of Linda V. — as with other families who are also looking for their daughters and sons.

A good student who quietly became a supporter of radical views

In Pulsnitz, located near Dresden, the call waits for her 29-year-old sister Miriam, she asks the reporters to get in touch. The last news was in January of Mosul. Like many other girls in Germany and other countries, a great student, Linda V., the third student in the class who loved math, chemistry and physics, has quietly become a supporter of radical views. Instead of rap, she suddenly began to listen to Arabic music, start wearing a scarf.

1 July 2016, she said goodbye to the family, lied — she said she was spending the night at a friend: “I’ll be back on Sunday at 16 o’clock”. Instead, she forged a power of attorney and bought a ticket to Istanbul. Linda V. has vanished, like many other young girls. IG recruited such as Linda V., purposefully through the online teenagers who believed in Syria and Iraq creates a real Islamic state, which need to be protected. If not with weapons, then as a jihadi bride, giving birth to children for the next generation of the Caliphate.

The Internet is a recruitment for life in the Caliphate. In private chat promoted the struggle “the lions of Jihad” against the infidels bomb the castle. Then talking about an attractive life in the Caliphate. Women tell how they, being faithful spouses support their husbands in the fight. Jihad in pink color. And Linda V. fell into this trap. Now that she is under arrest in Baghdad, created the impression that she understood what the situation was.

While negotiating about the phone conversation with my sister, Linda. begins to tell his story. It took her one month to get to Iraq. In fact, she didn’t want to be in Mosul, it is redirected. Her husband, the fighter ISIS, was killed soon after her arrival. She is ready to speak. The Prosecutor says, “For the mere illegal border crossing our juvenile criminal law provides for up to 3.5 years in prison”.

Linda V. is sitting very quietly on the chair, in the bed in the corner of the room lies another Chechen woman, she was wounded in the back. I would like to ask Linda V. many questions. Are true the rumors that spread on Twitter? Is it true that she was armed with a sniper rifle? She was a fighter ISIS? What she knows about the fate of other Germans who lived in Mosul? The French sent their own special forces to Mosul, which is there to find out which of their compatriots was killed in the fighting in the city. They photographed the corpses and take DNA samples. The one who died, already not in danger.

“We will move. Most importantly, she’s alive”

Then the door opens, is an officer of the Gold crew. Today will not be a phone conversation with my sister. And time of the visit came to an end. Probably, it will be possible to visit Linda V. the other day. But this is possible only if there are compelling reasons.

Miriam, sister Linda knows since the time of the publication of the first photos on Twitter that Linda is Linda. She is at home in Saxony and hiding from the reporters who are standing outside the door. “I’m glad that she’s alive,” she says to reporters NDR, WDR Süddeeutsche Zeitung. But many families are not lucky. Now she’s hoping her little sister will come back to Germany, even if she is threatened investigation of the case of the preparation of serious crimes. “For me now it is not in the first place. Most importantly, she’s alive”.