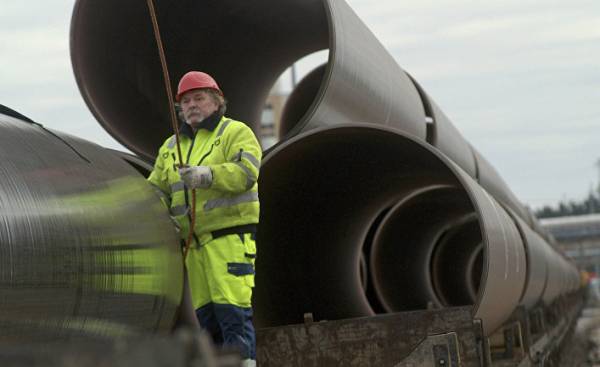 As harmful to the climate coal-fired power plant soon to be decommissioned, the demand for alternative energy sources in Europe will greatly increase. The only question is, where will the gas?

The new pipe through the Baltic sea? A gas pipeline from Norway to Poland? Liquefied natural gas from tankers? Whatever path the future of gas was not discussed, problems lurk everywhere. We are talking not only about money, but about power and spheres of influence, and therefore about politics. The U.S. is considering sanctions, Russia and Germany, bypassing Poland, the European Commission intervenes. Review.

They all want gas. Experts in the following years predict a growing demand — already at least because a large number of harmful to the climate coal-fired power plants will be decommissioned. So by 2025, according to analysts of UniCredit Bank, the EU could consume 40-60 billion cubic meters of gas more. For comparison, only Germany every year imports 80 billion cubic meters of gas. Controversial is just a matter of where the gas should go and in what way. “The struggle for market share in Europe is in full swing, says Kirsten Westphal (Westphal Kirsten), overseeing the global energy market in the Berlin Foundation for science and politics (SWP). And each pursues its own objectives”.

Gas pipes bring money and create dependency. So, only the Ukrainian gas company “Naftogaz” gets almost a billion dollars a year for the transportation of Russian gas. But now two new pipeline threatened his business: the second phase of an existing gas pipeline passing through the Baltic sea, Nord stream and “Turkish stream”, passing through the Black sea. Both bypass Ukraine, both builds, the Russian gas monopoly “Gazprom”. Logically, this is opposed by Poland, which still is also a transit country. Most disturbing is the Nord stream — 2, Germany could become the transport hub for Russian gas. Such a dependence is frightening many residents of Eastern Europe. The European Commission is urged to make a plan. She wants to get a mandate from EU member States, with which it could participate in the formation of rules for a new pipeline, so to speak, as a mediator. Moscow doesn’t like.

Where it comes to the European gas? Since the beginning of the gas crisis between Ukraine and Russia, the European Union is trying to increase the number of its suppliers. Because, at the time, as the demand for natural gas in the EU increases, the supply decreases. Field in the North sea runs out, in the Netherlands the earthquake eventually led to the decline in gas production. So, you need to import from outside the EU. Among the options, along with Russia, deals with Norway, the countries of the Persian Gulf, the Caspian region or North America.

What ways could go gas?

Here begins the slippery geopolitics. Because pipelines are cement and the relations arising in the implementation of supply. For example, Nord stream-2, although still there is no specific delivery contracts. But, since the financing of the pipeline was attended by such major gas companies as Wintershall, Engie, Uniper, OMV and Shell, they want to use them, and. But what comes through the pipeline in the Baltic sea, will not go in other ways — for example, gas pipeline Poland-Denmark, which would deliver Norwegian gas via Denmark to Poland. Or through the TRANS Adriatic pipeline and TRANS Anatolian pipeline that should deliver gas from the Azerbaijani field “Shah Deniz II” and Albania to Italy. This pipeline is already under construction, in 2020 it needs to supply the gas, but in much smaller numbers than the Northern flow — 2.

Is liquefied natural gas a viable alternative to the pipeline?

LNG “liquefied natural gas”, last year saw a real boom. So, the wealth of the Emirate of Qatar is based largely on the export of liquefied natural gas, mainly to Japan. A growing number of new players in the market, among them Australia. This has led to lower prices. However, such gas is virtually impossible to compete with transported through the pipelines. The procedure of liquefaction is costly, mostly it comes on the ships to the port of destination, there again returns to gaseous form and transported down the pipeline. However, some EU countries also rely on LNG, especially Poland. Warsaw with the new terminal in Swinoujscie wants to make itself independent of imports from Russia. It may be more expensive, but we are talking about power and influence.

What is the role of the United States?

United States over the years greatly increased their production of gas, especially through hydraulic fracturing technology, which have been criticized in our country. They hope to export gas on a large scale. Now with lightning speed built terminals to ship gas. “It’s amazing the speed with which all environmental problems are discarded by the wayside, — said the expert of the SWP Kirsten Westphal. It is obvious that the new administration would help to ensure that American LNG could quickly gain market share”. To do this, and stricter sanctions against Russia, which recently voted unanimously in the U.S. Senate. The vote of the house of representatives while the expected.

What are the implications of the sanctions?

If the wording of the Senate be approved, more no company will be able to participate in the construction or financing of Russian export pipelines, without fear of sanctions from America. This can have far-reaching consequences not only for the planned Nord stream, but also for all existing Russian pipelines. Many Western companies are involved in the maintenance and current repair of gas pipelines. The US, by contrast, could receive a share of the gas market. Coincidence or not: but a competitor for LNG, Qatar, just suffers from the sanctions of his neighbors.

What this means for consumers in Germany?

The days will become increasingly hectic. In recent times the struggle for gas supply to Europe led to falling prices. The production of electricity in gas power plants became competitive again. If the U.S. sanctions will weaken the Gazprom pipelines, more liquefied natural gas will be supplied to Europe, most likely from overseas. Competition will suffer and the price of gas will increase.