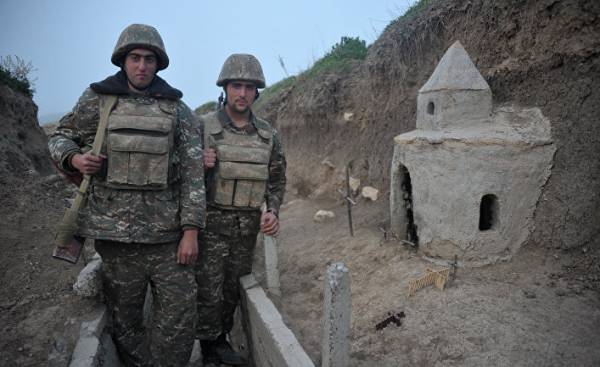 After the events of the fourth of July (escalation at the border of Nagorno Karabakh and Azerbaijan — approx. ed.) on the line of contact of Karabakh-Azerbaijani armed forces of Azerbaijan, like Armenia, has changed markedly.

Baku, at least outwardly, has become more reticent and cautious, but his mysterious silence does not indicate that he has become more quiet or began to assess the situation more clearly. In turn, the position of the Armenian side are becoming clearer, indicating the determination to find proportionate responses to the increased military threat.

It testifies to the occurrence of critical events, which can clarify the Karabakh negotiation process, which began after the may ceasefire in 1994, especially after the April war of 2016 the issue remains uncertain.

As shown by the interview of the President of Armenia on 16th of July, the negotiating process has reached the stage where consistently discriminerende settlement option called the Madrid principles. From his words we can assume that these principles will be consigned to history and rejects them not Armenia, and Azerbaijan.

This dilemma is voiced by Serzh Sargsyan in the above interview, is a consequence of the fact that Azerbaijan conducts a policy of rejection of the Madrid principles proposed by the international community. Therefore, the Armenian side, for the last time addressing the content of these principles, the President reminded about the essence of “compromise”, reinforced these principles.

The first of these points is known — the issue of recognition and implementation of rights of the people of the Nagorno Karabakh Republic to self-determination, after which only it will be possible to discuss issues concerning the territories and security.

Given the fixation of this reality, Armenia is sending a clear signal to his opponent to forget all about possible unilateral ledges of Armenia and to think about the still existing possibility of compromise, because “if this problem can find a fix for another 20 years, the Armenian side will never be willing to resolve the situation through concessions. Because it’s destructive path and it can never solve the problem.”

Serial torpedoing of Azerbaijan to reach a compromise, the peak of which was the war of 2016, now just forced the Armenian side to go to the final explanation of the situation, saying that unilateral concessions will never happen.

And if Azerbaijan is ready to compromise, then first he needs to approve the implementation of mechanisms of mutual trust, agreement on which was reached last year in Vienna and St. Petersburg, because only then the Armenian side will have no arguments to abandon the “substantive talks” dreams of Baku.

And since this is not happening, it becomes obvious that Azerbaijan fundamentally rejects the compromise and simply wants to get all the parts.

For this reason, at the current stage of Armenia clearly gives to understand that though after all this is not against the continuation of negotiations, but in the preservation of the destructive position of Azerbaijani authorities, Yerevan does not nurtures any serious expectations. So, the parties are left with two options:

A) long-term freezing of the conflict in terms of maintaining the status quo, which will lead to periodic contact of the conflicting parties and mediators not to continue the negotiating process, and to discuss terms of restarting talks,

B) the renewal of the war by rejecting the “compromise” of Azerbaijan with a clear goal to flood the self-determination of the NKR people in blood, to destroy and forcibly to evict.

This shows that the Armenian leadership is aware that it is time to call a spade a spade. This means the situation around the region is now favorable in order to put the opponent in front of a clear choice and define the further course of events.

Without going into details the General assessment of the situation, we can say that the most important evidence of this was restrained assessment and how Azerbaijan will react to Serzh Sargsyan’s interview. Adviser to the Azerbaijani President on foreign Affairs, Novruz Mammadov, in this regard remarked that the Karabakh conflict can flare up with new force, as it is the result of geopolitical games.

But the Minister of foreign Affairs Elmar Mammadyarov has approved the proposal to organize a meeting of the presidents of the two countries at the end of the year, with the condition that the pre-parties will be provided by the co-chairs proposed the settlement, i.e., will be a meaningful discussion.

One can only imagine what would happened in Azerbaijan, if a year ago, after the April collision of 2016, the President of Armenia made a clear and unambiguous questions, typical interview July 16. Then Ilham Aliyev, too, once I would have worn a military uniform, and the situation undoubtedly would have got out of control. Now this does not happen because Armenia used the past year right, preparing for the time when the enemy can speak in a more understandable and clear language.

Interview of President of Armenia Serzh Sargsyan on July 16 suggests that the initiative passed into the hands of the Armenian side, and the enemy can no longer continue their policy of blackmail, trying to speed up the negotiation process in an atmosphere of threats of resumption of war.