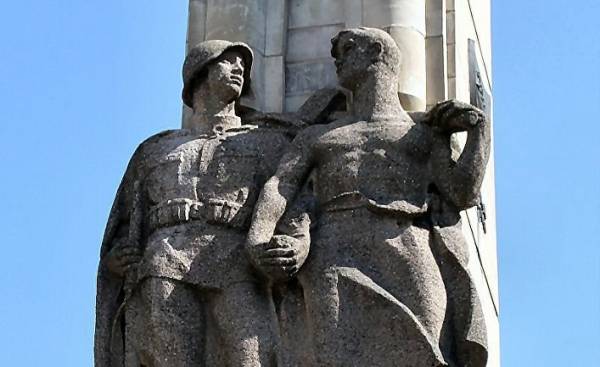 The Russian foreign Ministry made another statement on the subject of Soviet monuments in Poland. This time on the website of the Russian Embassy in Warsaw can read that Moscow is outraged by the step of the President Andrzej Duda (Andrzej Duda), which is 22 June 2017 approved amendments to the law on prohibition of propaganda of communism and other totalitarian regimes. The Embassy threatened that such actions will not remain without consequences.

Russian hysteria about the monuments

What’s the point? According to the amendments, which were approved by the President, in Poland it is planned to dismantle all the monuments in honor of the red army. Moscow has repeatedly warned that such actions it considers hostile. Russian media covered the hysteria, and in the information chaos of the real facts lost value. On Wednesday, on the First channel of Russian television showed the journalistic program about how “poles desecrate the memory of Russian heroes”. The Russians did not seem to notice that the law (despite its tough wording) does not affect cemeteries and places of burial. Destroy them no one is going. In contrast, the poles treat them with reverence and restored the crumbling headstones. Are subject to dismantle all the monuments of the Polish-Soviet brotherhood and the obelisks propagandistic.

The same process took place in the Baltic States. Now — in a slightly different form — it is unfolding in Ukraine. On the river the first thing demolished monuments to Lenin and other builders of communism. The Russian side expresses its indignation does not hide that is extremely confrontational stance. If the party “law and justice” (PiS) sees its main task is to destroy the reminders of the Soviet occupation, Moscow wants to emphasize with the help of the monuments that they liberated Poland and Central Europe, implying that the Russians for is something owed.

Russian propaganda is using the war for monuments in two ways. First, it convinces the Russians are in their mass do not know anything about the history of Poland and its modern politics that the poles — the inborn Russophobia. This is nothing new: offers its citizens a way of Poland for the past fifteen years. The theme of dismantling of the monument fits perfectly into the message, allowing you to emphasize the ingratitude of the poles, who insult the memory of 600 thousand Soviet soldiers killed.

The second leitmotif is relatively recent. He looks more dangerous because they are addressed to the poles… or, at least, to some of us. For some time now “brotherly” or “Slavic” theme is used to criticize all Polish governments after 1989. It was their fault that they lost their independence and kowtow to the West, selling for dollars and euros, the memory of the Slavic brotherhood of poles and Russians during the Second world war. At the same time promoted the myth of the brotherhood, the joint fight during the war years, cultural affinities and so on. This message is addressed to Putin adoring leftist and nationalist forces, as well as newnational Democrats. This is a long-term strategy to impact on young poles and the inspiration they alternative to mainstream ideas.

The Russians are completely unfazed

The success of this campaign appear more as questionable, except for a pair of anti-Ukrainian provocations in cemeteries and activation of Internet trolls. But the Russians know how to be patient. From time to time they “throw” absurd and even grotesque stories, for example, telling that the battle of Grunwald was won by the Russians with the poles, or, as a few days ago, publishing the documents of the Ministry of defence about the liberation of Poland in 1944. According to these classified materials, the poles of the red army, expressed gratitude, and the Soviet army helped the Warsaw uprising. The fact that the publication coincided with the beginning of the campaign against the dismantling of monuments in Poland, looks not accidental: it is part of a massive battle for historical memory, which acquires great importance in the battles over contemporary politics.