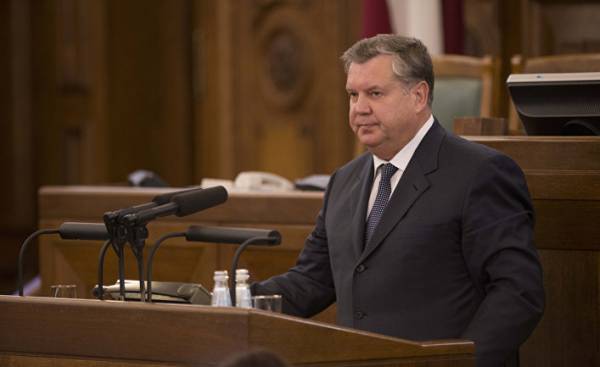 Interview with the Deputy of the diet Alexander Kirstein (National Association) about automatic granting of citizenship to children of non-citizens and on the national presidential elections, releases political scandal because of the “talk of the oligarchs”, Russia’s influence in Latvia and in the world, as well as changes in the political climate.

NRA: the President of the Latvian state offered to think about automatic granting of citizenship to children of non-citizens. How do you assess this initiative?

Alexander Kirshtejns: I Think the President doesn’t know about the Latvian-Russian peace Treaty of 1920, which defines who can be a citizen of Latvia. This contract stipulates that a citizen may be the one whose parents lived within the administrative borders of Latvia before the First world war. Everything else is just additions and corrections. Was given year for option: all those who from 1920 to 1921 wanted to become citizens of Latvia, were invited to participate. And many used it, including people who had fled from the Bolsheviks, there were those who had no connection with Latvians and Latvian language proficiency. But the option is over. Our President needs to be a clear answer to those who ask: why do so — I arrived in Latvia on a tank, but I do not have the citizenship of Latvia? The President may answer: because your grandfather did not use the opportunity of the option. Second, in a divided education that was offered by the President, it is more like treason. Why? Because we are in the presence of so liberal nationality Law is the choice of the parents, is their child a citizen or not. If parents do not want it, in the family of such education, and therefore we should not intrude with his citizenship. So, for example, in Denmark only 18 years of age, the alien may choose the citizenship of the parents in this case do not decide anything. Why are there many parents do not want their children to be citizens of LR? They can Latvia ever again will be an integral part of the Russian Empire, they associate your child’s future with Russia.

– What are your thoughts on education in the national language?

— I am pessimistic. At the time, I believed that gradually this will happen before 2004. But there was a sharp retreat, and it started Vaira Vike-Freiberga, because it has not signed the Law on the state language, which was tougher today. Vike-Freiberga had threatened that in the event of such hard law, we will not be in NATO and the EU. This position of the President was the signal: every year reduced the number of parents sending their children to school Russian stream, but after the President threw back the law on the state language, desire to study at Russian thread again increased. We have no record of such conversations as “conversations oligarchs”, so we don’t know whether it happened after a visit Vike-Freiberga in the US or after her meeting in the Alps with Putin. But it also explains the three-time refusal to allow to publish a list of KGB agents. A hundred years in Latvia Russian schools, probably, will be no more, but now Russia’s influence in Latvia is large, and the transition to teaching in schools only in the state language this is the goal.

— This is nothing new. During perestroika, Gorbachev, preparing a new agreement on the Soviet Union proposed that each Soviet Republic will be a President. The law society of the Latvian SSR headed by Valdis Birkavsa was to prepare the law on the President of the LSSR. But events moved faster, and the Soviet Union collapsed. It’s clear that the presidents resident, namely the presidents, who are under the influence of the big neighbor, is very beneficial. For example, in Finland was Urho Kekkonen, which partially did what he was told, but at the same time, cared about his people. Such a bright agent… with regard to popularly elected presidents, that is examples: Uzbekistan, Tajikistan, Kazakhstan, Moldova… Another example is the UK. There is no President, but there is a Queen. When we asked the British, refused ever, the Royal person to sign any decision of Parliament, they thought long and said, Yes, in the middle ages. But after Cromwell cut off the king’s head, the cases are not signing any more. In the US the electoral College. It was good so far until I chose trump. The electoral College was designed to ensure that power does not come to the populists. In Latvia the party can say who they want to see the President, and we said we want Egils Growth. Why “Unity” is not supported? In any negotiations with the “Consent” they participated? Mr. Vejonis invented clever: the Cabinet of Ministers is determined by the Prime Minister and Ministers appointed by the President. To whom these Ministers will be accountable? Before the Prime Minister, the President? If the President will choose people who will push? Party, private entity? Who will collect the money for the campaign? Public organization? The financiers? Do not want some “oligarchs” to donate a million dollars to promote “their man?..

In Latvia, the great influence of Russian money and it can bother our allies.

– What about this show?

— View what happened with the objects, guaranteeing the independence of Latvia. Transport: in 2003 we from the Sejm were present as observers in the European Parliament, from morning to evening there sat a group of Balts and talked about the project Rail Baltica, which was to be implemented over 10 years. It has been 14 years. On energy: the cleanest method of producing energy is nuclear power, which for such a small country as Latvia, it would be the best option. If the gas blockade, as long inchukalnskoe gas storage will be able to provide us with gas? Two and a half, three years. Why collapsed the project Ignalina NPP? In Lithuania, held an informal referendum in which the majority expressed concern about the danger of nuclear power plants. In Sweden a reactor to less than a million people, and all is quiet… was, at the time Russia campaigned for the day to protest against the construction of NPPs to Russian gas have been marketing. Now the West supports the construction of Russian gas pipeline to be able to pay Russia even more. Russia has the money to buy military technology, and the West then it will be hypocritical to complain about the Russian military threat. Russia’s influence in Latvia continues through citizenship for newborn children of non-citizens, schools with Russian language of instruction, governments and government agencies, not demolished Soviet monuments. But big projects are stopped. This influence is deeper than we can see.

– Perhaps “the talk of oligarchs” also may indicate the influence of Russia.

Maybe. The Commission of the diet on investigation should find out: and if the prosecution of someone saved, then act accordingly. You must also find out if they (Minister of agriculture) Duklavs or anyone else the mystery of ownership. In this case, it is a real violation… And more. Business with Russia is possible only if there is cooperation with people from the Federal security service, because there is no businessman who is not associated with this service. If in Latvia will build an object worth a million euros, he will inevitably be linked to the mentioned service. There is still a connection to the case of Abrene. Russian billionaire Pyotr Aven in an interview openly said that he on the instructions of Putin was meeting with Vaira Vike-Freiberga and said if she would settle the issue of the Latvian-Russian border, of course, in such a way that Abrene is on the side of Russia, then in Latvia will receive the goods. A lot of cargo! Maybe as payment? Maybe someone overheard these conversations? Let the Commission investigate.

— What is “Consent”? Well, this party has a cooperation agreement with Putin’s party. But Putin “Consent” is not necessary, because all he can handle with people from Latvian parties. Maybe “Consent” is necessary only to ensure that together with their “Russian world” to organize in Jurmala “New Volga-2”? We should not overestimate the role of “Consent”, but we must understand that Latvia is a comfort zone for Russian — both old and young. Well, don’t go, they rest in Sweden. “Consent” is necessary precisely in order to ensure the availability of this comfort zone. And which individuals represent our state in the European Parliament? Zhdanok from the Russian party and the turnip from the “Consent” cooperates with Grigule of the Union green and peasants…

– Do you see something positive in the development of the state?

— Lower taxes. The growth of industrial production in the 1st quarter was 9%, also increasing exports. Remember that we live in a pollution-free, green environment with a 500-kilometrovoj Maritime border, and every citizen is part owner of it all. Besides, there are forecasts that starting from 2021-2025, the number of inhabitants of Latvia will no longer decrease.