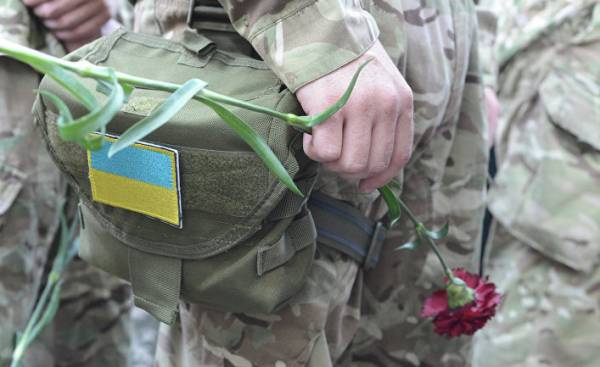 “For every life” is the motto of medical battalion “the Hospitallers”, known for its actions in the ATO zone. Now its headquarters is located in a former orphanage in the suburb of Pavlograd, a small town in the East of Ukraine. The interior is very modest, the walls are decorated with posters, one can see the items brought from the war zone — riddled road signs, helmets and shells. We go into the room where several men talking to a girl in a wheelchair with the purple hair. This 22-year-old Yana Zinkevych, the founder and commander of the Hospitallers.

The history of this medical battalion has its roots in 2014, when the conflict flared up. After protests on the Maidan in Kiev, Jan abandoned the idea to pass exams at the Lviv medical Institute and along with many others enrolled in one of the volunteer battalions, for the most part were part of the “Right sector” (a terrorist organization banned in Russia — approx. ed.).

“I didn’t understand the mechanism of war. After the first battle there were many wounded and dead. Was not of medical instruments and medicines. No one picked up and not buried the dead… It was real chaos,” she says El Models.

“During the shelling of the town of Pisco, the priest told me about the Hospitaller order, and then I decided that if I survive, I will create something like that” – says the girl, confined to a wheelchair after a car accident.

Part in the battles of Saur-Grave, in Ilovaisk, at the storming of the Donetsk airport brought Yana Zinkevych great fame in the Ukrainian society. “Soon we began to enroll more people, they offered help, someone car, someone medication, or medical instruments… Gradually we improved its organization, was formed by positional group, medical brigade. Now 65 people are actively working, consisting of four large groups in a combat zone, in small groups of 5-6 people, depending on the intensity of the fighting, and we have 200 volunteers, and reservists,” says Ian.

Zinkevich does not hide his discontent with the Kyiv authorities. “We do not receive any material support from them, but at least they do not interfere with us, and that’s good. We work through donations or volunteers of the Ukrainian Diaspora,” — said the battalion commander, adding that at the same time that they are actively cooperating with the government.

Ian says that in some cases, they assisted the wounded Pro-Russian militia separatists. “We created this not to help anyone in particular but to all who need it, civilian, military, volunteers… It doesn’t matter who is on whose side fighting, we understand that they are human, and our authorities can exchange them for prisoners of war. We provided them with the necessary assistance, was placed in the hospital and passed to the SBU,” she says. Human rights organizations, particularly Amnesty International, have accused both sides to the Ukrainian conflict, torture and extrajudicial killings. Especially appalling testimony of prisoners captured by the fighters of “Right sector”.

The role of women in war

Of the nine battalion commanders, members of the Ukrainian volunteer army, Yana Zinkevych is the only woman. In the Armed Forces of Ukraine, the share of women is 13% of the total number of troops, and positions them just 2.9%. These figures do not take into account all the women who since the beginning of the conflict was part of the volunteer battalions.

In spite of everything, in this war women participate, not only being in combat positions. Across the country, many of them have an active civil position. “The number of volunteers is constantly growing in many cities. 90% of the groups that are engaged in the delivery of food, headed by women, the men acting as drivers or help unload the crates,” – says Galina Goncharenko, the mother of a dead soldier, founder of a boarding house “the Soldier’s halt”.

From the very beginning of the conflict, the volunteers played an important role. They collected money for the army, made camouflage nets, equipped with resting places for the soldiers, such as at the railway station in Kiev. “War changes everyone forever. We used to think that men go to war and women are left to protect the home. Women now participate in everything. In war, they perform duties of military doctors, trainers… we proved that We are able to provide a reliable rear”, — said in conclusion, Yana Zinkevych.