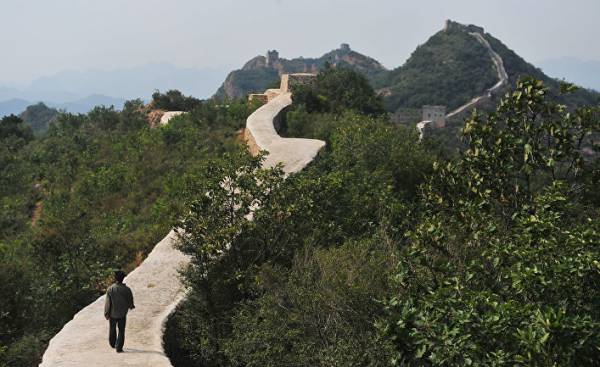 China is a mysterious country. The main driving force for the development of Chinese economy, Chinese Internet users — the largest in the world. China is the second largest trading nation, with trade amounting to 37% of the country’s economy according to World Bank statistics over the last year. In China — more than 731 million Internet users. In the list of the 20 largest Internet companies by market capitalization seven of the Chinese.

Based on this, China is not a country that can exist without looking at the outside world. So, at the world economic forum in Davos this year, the President of China, XI Jinping stressed that “protectionism — akin to the conclusion themselves in a dark room”.

But it happens that way. Globalization China goes beyond Economics. When it comes to politics and diplomacy, China “locks himself in a dark room”.

An example of this can be the story of the deceased before the Chinese Nobel laureate Liu Xiaobo. The government brought a charge against him of calling for a coup d’etat. In 2008, Liu Xiaobo, has completed the drafting of “Charter 08” (Manifesto, signed by representatives of the intelligentsia of China in 2008. Calls for political reforms and democratization of the PRC — approx. ed.). In the Manifesto, he called for the abolition of the dictatorship, the approval of guarantees of fundamental human rights, judicial independence, freedom of speech, religion, freedom of Assembly and political organizations. These rights are in a normal state are perceived as something self-evident. And for the appeal he was sentenced to 11 years in prison.

Liu Xiaobo was imprisoned for 8 years, when in late may he was diagnosed with liver cancer. Human rights activist transferred to hospital where he died on July 13. The Chinese government reported his death after the completion of the G20 summit in Hamburg, which was attended by President XI Jinping. Two days later, the body of Liu Xiaobo was cremated and the ashes immersed in the sea near Dalian city. The process of getting rid of the remains of speed like a military operation.

Along with the action against Liu Xiaobo, a demonstration can be regarded as the reaction of the Chinese authorities on Internet humor. The government began to block the social networks images of cartoon character Winnie the Pooh, which is often compared to the President of the PRC.

After all those ghosts were destroyed, according to the Federal channel began airing documentaries about the great deeds of XI Jinping. The Chinese believe in the possibility of such control of public opinion.

Chinese authorities behave as if there is no public debate and criticism from the international community. And there is a reason.

Western countries still speak loudly about the death of Liu Xiaobo. While at the G20 summit, where the President of the PRC could talk in person, no one raised this issue. The existence of China as a dictatorship is because in the presence of his officials is extremely difficult to raise issues about which they do not wish to speak.

The mystique of China is more than just business with the DPRK. In the opinion of the world community, North Korea is a country of the offender. The state, reached such status as China, it is desirable to be on one side of the fence with the DPRK. In turn, China pushes North Korea, and not “holding her hands tightly”.

The DPRK is under economic sanctions for over ten years. After coming to power, Kim Jong-UN in 2012 they were only tightened due to increased nuclear and military provocations. The purpose of sanctions is to complicate the North to develop its nuclear program. To weaken the country so much that Kim Jong-UN has changed its policy.

So, when the economic crisis deepened, Kim Jong Il’s father, Kim Jong-UN, went on the six-party talks and nuclear talks with the United States. However, Kim Jong Ynu have not yet had the opportunity to experience such a crisis. The international isolation of the DPRK deepens, however the economy has no problem continuing to exist. According to rough estimates, there has been a rapid loss of North Korea with its economic position, while its foreign trade is still negligible.

This riddle is impossible to solve, if not to take into account China. 30-kilometer oil pipeline from Dandong to the DPRK is still functioning. It to North Korea annually shipped about one million tons of oil. The US and other countries require China to reduce the supply, but the likelihood that China will meet these requirements, close to zero. This means that the chances of luring the North to the negotiating table in fact do not exist.

It is wrong to assume that the focus on China in the issue of North Korea — erroneous policy of the United States and South Korea. The road becomes a maze from which there is no escape. However, it does not seem that the new Korean government was interested in establishing dialogue with China. It employs only an internal struggle. But there is no more important national issues than the uncertain future of the Korean Peninsula with the North Korean problem of unification, which cannot be solved, not going wall.