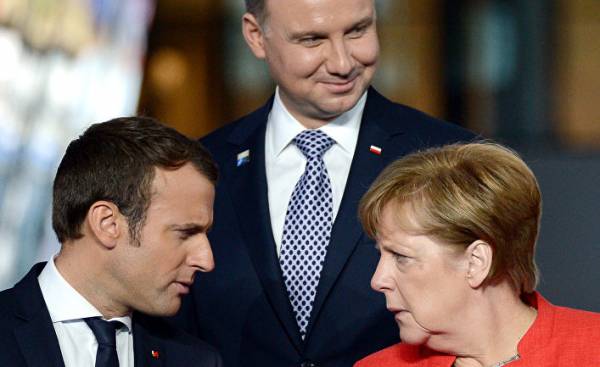 Emmanuel macron wants to reform France and the EU. A lot of ideas, but the question is, how many of them eventually succeed. But the first round meeting of the EU at the highest level was for the Makron truly stellar.

When Thursday began a two-day EU summit, attention was drawn to the Emmanuel Macron. After years of crisis the new French President has managed to breathe life into the emerging shoots of confidence in the cooperation within the EU, for some Makron is the epitome of fresh energy and big goals that can really put an end to the constant talk about the crisis of the EU.

Prime Minister Lars løkke Rasmussen (Left party), German Chancellor Angela Merkel and European Council President Donald Tusk from the moment of arrival at the summit asked him optimistic tone. Lark løkke Rasmussen, in particular, stressed how important it is that there is a man who “believes in the value of European cooperation”, — the President of France.

While some of the ideas of Macron, belonging to the armed forces, trade and the Euro may eventually become a problem for Denmark, hope Lars løkke Rasmussen overall still significantly outweigh the concerns.

In countries such as Poland and Hungary, by contrast, enthusiasm is much less because Emmanuel macron loudly rants about the fact that all EU countries should live in accordance with the rule of law and the General law — regardless of what some of the member States without any enthusiasm include, for example, to the distribution of asylum-seekers.

Although the reputation of the Makron got the first scratch after the dismissal of four Ministers — three of them were dismissed as a result of the investigation about the possible misuse of EU funds — after only months in power, according to Emmanuel Macron at the summit to see it was impossible.

“For me Europe is not only the idea, but the project and the goals that I defended during his campaign. We are going to talk about the future of Europe, particularly the Europe that protects”, said Emmanuel macron.

The French President to start two big wishes related to the EU: strengthening defence cooperation and combating terrorism, as regards the trading sector, then he would like a more effective fight against “unfair” competition, especially from China.

The first item on the agenda was cooperation in the field of defense, the heads of state and government supported the idea of enhanced “permanent structured cooperation”, referred to as PESCO — for those countries who want to participate in it. This is in accordance with the Franco-German wishes, because France and Germany want it from the moment when this possibility was recorded in the Lisbon Treaty. The British, who, as you know, and the way to exit from the EU no longer oppose PESCO, that means that he is given the green light.

Both Donald Tusk and Emmanuel macron called the decision “historic.” The question is, what cooperation would mean. The relevant negotiations are conducted in summer and autumn, but these negotiations will be without Danish participation Denmark because of a special amendment related to military matters, remain on the sidelines.

Prime Minister Lars løkke Rasmussen still was glad that all countries-EU members agree that PESCO will be a kind of complement to NATO.

The obvious opportunity to more quickly react in case of military missions, for example, in Africa, but Germany and France have not yet quite agreed about what would mean such cooperation. However, Emmanuel macron pays great attention to the continuation of military cooperation with the British after Breccia, and in this connection the question arises about how this may affect plans.

Another wish of the French President — on the agenda on Friday, when the heads of state and government will discuss trade policy. Emmanuel macron especially emphasizes that the EU “protects” its citizens from the negative effects of globalization. He stressed that he would like better protection against acquisitions that foreigners commit in strategic sectors.

This issue of the agenda is very important for France and Germany, and largely we are talking about whether it is possible to slow down Chinese acquisition in Europe.

“I am in favour of freedom of trade, although we must not be naive. Protectionism is not the answer, but we need honest defense mechanisms,” said macron.

It’s a bit like trade barriers, conductive to which are the advocates of free trade such as government in Denmark and the other countries of the European North.

Ultimately, a particularly important question about how effectively will work of the Franco-German motor in cooperation within the EU, as well as the major reform of the Euro zone, which really has the potential that could change the EU.

Here at the Macron. The German Chancellor does not reject them too. Merkel and macron seem to get along well with each other, but at the EU summit macron said that France and Germany do not agree in everything.

Macron has just started his five-year presidential term, yet he is a fresh breath, and his statements largely speak to the concern of the citizens about security, globalization and work. Its main priority the French presidency has made a massive and very difficult reforms in France. So if the idea of Macron subsequently to breathe life into a revolution in the EU — the question is still open.