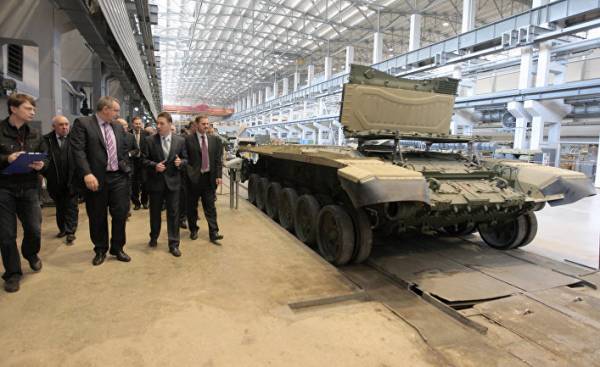 According to the decree of the President of the Russian Federation Vladimir Putin, the Russian defense industry began production of civilian products, but not like it was in the late 80’s-early 90-ies of the last century. Then, in the first conversion programmes, imposed by the disarmament treaties with the United States, and modern arms factories produced pots and Titan spade, from which the developers of missiles and military vehicles were horrified.

Now the situation is different. Russia is carrying out a rearmament of the army and intends to use military technology to civil products, not reducing weapons release, high demand. In 2016, Russia sold arms worth USD 15 billion, of which $ 13 billion have “Rosoboronexport”, — says the Director of the state Corporation “rostec”, which includes Rosoboronexport.

In connection with the introduction against it economic sanctions, Russia has developed a program of import substitution. In the city of Nizhny Tagil, in the heart of the Urals, is “Uralvagonzavod” (UVZ), the largest producer of tanks in the country and one of the largest in the world. In his well-guarded plants was about the famous machines of the T-34, T-72 and T-90, and now completes the fine-tuning of the tank “Armata”, which will go into service in 2019. While the army of Bashar al-Assad uses Uralvagonzavod armored vehicles in the battles in Syria, 140 kilometers South of Nizhny Tagil, Yekaterinburg, President Putin showed them the civilian modifications. Armored excavators rough terrain, Arctic and mined areas.

Founded in 1936, Uralvagonzavod received a special development in 1941 due to the evacuation of the military factories from the Western Soviet Union (especially from Ukraine) after the attack of Nazi Germany. Now, in addition to armored vehicles, he manufactures wagons, railway platforms, tanks and tractors. “We have not yet fully recovered, though not drowning. We need to get stronger, to stand on his feet, and then rushing up,” says new Director appointed Alexander Potapov, who until recently held the post of Deputy Minister of industry and trade. In March he was sent to Nizhny Tagil for the rehabilitation of the UVZ from the consequences of crises and debts. Potapov leads with Russian banks talks about the renegotiation of the loan agreements, and calls the situation complicated. “Western sanctions have created additional incentives and mobilized us to find new partners and new markets, but the problem is the lack of cheap money for the Russian industry, and we are used to working with European banks,” – says Vasily Brovko, the Director of “Rostec”.

By order of Putin in December of last year, Uralvagonzavod became part of Rostec. State Corporation rostec was established in 2007 and now comprises 700 plants which form 14 holding companies (nine of them produced military products). At the head of “Rosteh” is Sergei Chemezov, who was a KGB officer and worked with Putin in East Germany.

As the Director of UVZ, 30% of the production is in the civilian sector and the rest by orders of the Ministry of defence and export. Putin demanded that defense companies to increase by 2030 the share of civilian products to 50%, but the “rostekh” plans to achieve this target by 2025.

Potapov, who recently visited Cuba and intends to go to India (the two longtime partner UVZ), argues that consolidated our turnover in the first half increased by 39% and 41% compared to the same period last year.

In total, UVZ employs 65 thousand people, from them 29 thousand in Nizhny Tagil. The volume of production for civil and military purposes, is scheduled for 2017, is from 140 to 145 billion rubles, said Potapov.

In search of markets

Uralvagonzavod is very much affected by the crisis of 2008, and in 2010 the plant had no orders, — says the Deputy editor-in-chief of the newspaper “Tagil worker”. Especially bad was 2013, when DC paid eight thousand workers, two-thirds of the average wage for a simple, to avoid layoffs and rising social tensions, — said the journalist.

According to Mineev, Uralvagonzavod was positively affected by protectionist restrictions imposed by Russia in the summer of 2013 cars and tanks, which were then bought in Ukraine at very competitive prices. But these measures proved inadequate because the market was oversaturated rail cars. The poor financial position of Uralvagonzavod has been caused and the problems of management more than forty enterprises located in different parts of the country, some of them were almost in a state of bankruptcy, which Putin gave UVZ in 2007 for the rehabilitation and streamlining. UVZ subjected to these enterprises reorganization and combined them into the consortium, which the President in 2016, gave “Assistance”.

In the function of this giant includes coordination of work and markets for their enterprises, and implementing public policy. Rostec is working, despite the sanctions imposed against the Corporation by the European Union and the United States. Russia lags behind Spain in terms of exports of high technologies (Spain — $ 7.9 billion, 2.2% of the global market; Russia — $ 7.5 billion, 2.1% of the world market).

Rostec, a large state Corporation, and the larger the ship, the less rocking in the storm,” — said the mayor of Nizhny Tagil Sergey Nosov, supporting the occurrence of Uralvagonzavod in rostec. Rostec gives us stability, Rosoboronexport provides a flow of income from exports,” — emphasizes noses, “heavyweight” of the Russian policy, working in industrial regions.

One of the problems now facing UVZ, this separation of military and civilian production because both depend on production facilities located in Nizhny Tagil.

From tanks to lanterns

Nizhny Tagil is clean air, but the ecological situation has significantly improved thanks to the mayor Sergey Nosov, as suggested by a number of residents in this city with a population of 360 thousand people, which accounts for almost one quarter of the GDP of Sverdlovsk region.

The level of air pollution, although higher than acceptable norms, but, nevertheless, declined the roads are paved in the Central part of the city created a green corridor, a renovated theater (thanks to the intervention of Putin), installed energy-efficient lighting. Lighting Nizhny Tagil has a civil firm Schwabe, created on the basis of the Yekaterinburg optical-mechanical plant, which previously produced the sights for tanks and machine guns, and now produces lamps and incubators for maternity hospitals. Urban lighting is part of the project “smart city” that wants to implement the “rostec” together with enterprises of the defense industry (energy-saving traffic lights, surveillance cameras, single tickets, unmanned aerial vehicles for environmental monitoring and tourist services). “It is expected to create 50 smart cities by 2025”, — said Vasily Brovko, a member of Putin leads the working group on the economy on digital technologies.