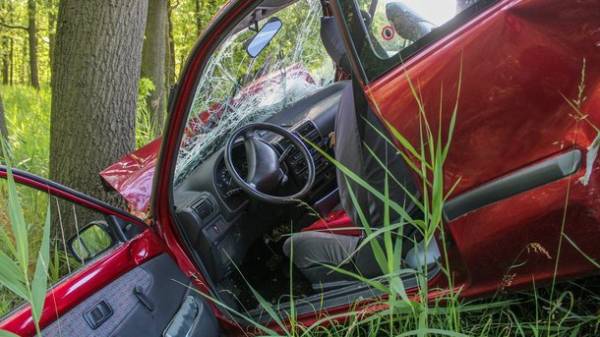 The number of road accidents in Ukraine continues to grow — for the first six months the country has seen a 76 622 accidents, which is 4400, or 6%, compared with the same period last year. These are the data of statistics Department of road safety of national police. The police say that the situation will correct new road patrols launched a month ago.

In its report Natspolitsiya notes what is happening on average, 423 accidents per day (instead of 397 last year). The highest increase of accidents as a percentage occurred in Mykolaiv, Lviv and Ternopil regions, and significantly decreased the accident rate only in Lugansk, Rivne and Poltava regions. As for the reasons, they remain traditional for the last years: excess of speed, infringement of rules of overtaking, journey of intersections, driving in a drunken state. In all regions, except for the Sumy, Odesa and Dnipropetrovsk, was more accident victims where the cause was bad track. At the same time the rarest causes of accidents the police, as in previous years, refers to the violation of traffic rules by drivers of animals (one case for six months), violation of the rules of towing (three cases) and the appearance on the road drunk pedestrians (43 cases). In addition, in some regions, slightly increased the number of accidents that were the fault of the children. 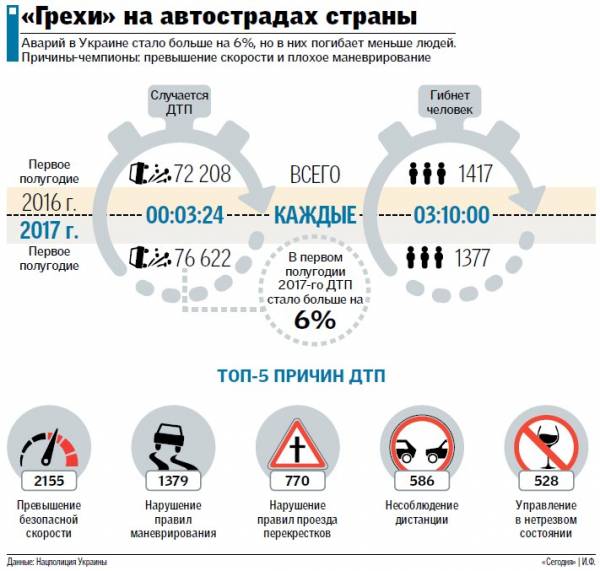 Dire statistics of the national police explain: between the elimination of the traffic police and the emergence of new traffic police it has been almost two years, so those drivers who are inclined to break, and relaxed even more.

“This could be one reason. After all, many drivers think: no traffic COP, so you can be a pig. All this could affect the statistics,” says one of the advisors to the interior Minister Ivan Varchenko.

In addition, the national police have complained that some accident has happened through no fault of the drivers or lack on the highways of traffic police. “Many accidents are related to bad condition of the roads, and it is also necessary to take into account,” adds Varchenko. Despite the increase in the number of accidents, the police claim that the situation with accident rate will improve. “In June, earned the road patrol police, and soon there will be first results”, says Varchenko.

And in the regions told us that there were more serious accidents because of traffic violations. For example, recent high-profile accident in the Vinnytsia region (killing four people), according to preliminary information, occurred because of the departure of the driver on the oncoming lane. And in Lviv oblast only in the last few days of the accident injured more than 20 people. In the town of Stryi bus driver (the cabin was 15 people) lost control and rammed a transport tree — miraculously, everyone survived. In many other cases, motorists overtaking others, faced with oncoming traffic. Many drivers we surveyed said that now is frequently seen on the trails and rudeness from the “colleagues”, and amateurism in the management of transport, but in combination with the bad roads situation often become an emergency.

“Reckless divorced as ever! I have 20 years of driving, they know the city, but in recent years began to go more careful,” he complained to us Kiev Michael Babi.

Today marks a month in Ukraine began to operate the first orders of the traffic police. In the early days the service took about 70 people to the end of the year plan of the Ministry of interior to send a patrol route almost 2,600 police (324 patrol). Their main difference from the former traffic police, the interior Ministry referred to the fact that they do not hide in “ambush”, and are constantly in motion, keeping the order on the roads.

One of the main violations of traffic rules, speeding, the new inspectors will record using the camera installed in the car.

They should not appear before the autumn. According to the management of patrol police, traffic cops will follow the order on 9800 km, the Agency specified that the new road guards practically does not differ from police patrol. They have the same shape and salaries (about UAH 10 thousand), but “armed” is “candy” — rods with a circle at the end instead of gaishnaya striped.

However, yesterday on any significant results of work road police in the national police to tell they were not ready, but promised to do so in the near future. Said only that the police now patrol four major trails: the queue is still the same.