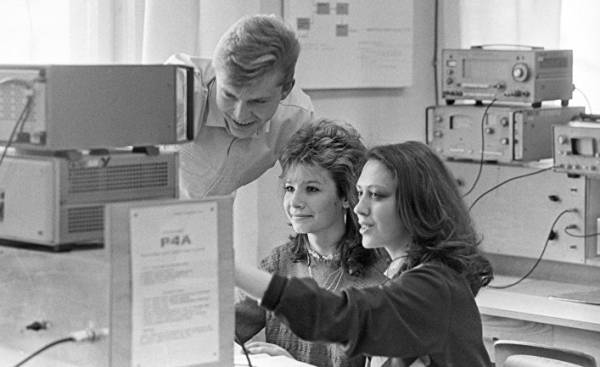 Daria with his startup wants to leave Minsk, Andrei has long been could work in Silicon valley or London, but remained. In the Belarusian capital soars striking innovative spirit.

Daria Minsky 28, she chose a table outside, lips painted red lipstick, she ordered a steak (not done). “The people here are technically well educated, says she came to the food, but none of them knows how to present themselves well and to organize start-up conference. I can.”

With a glass of red wine on the table and round sunglasses, she looked a bit like startowy option MIA Wallace played by Uma Thurman in the film pulp fiction. Her shirt says “Raise boys and girls the same way”.

In Minsk the sun shines. In the capital of Belarus with a population of approximately two million people. This place is the creative quarter of the city. For two days around the corner is “Create IT”: a forum of experts, round tables, lectures, workshops and so on.

A huge bust of Lenin on the 2.5 metre high pedestal stands in front of a gray wall of a house, abandoned but not forgotten, he looks at the street October, at an old factory, rusted broken cars in the yard. And he sees young entrepreneurs who are creating the reality of the IT industry.

People are smart, but not expensive

The conditions for this are good. People are smart, but not expensive. You can hire programmers for a relatively low hourly rate. The gross domestic product of Belarus ranges from five to six thousand dollars per capita, roughly one seventh of the economic performance of Germany.

For 23 years the country is controlled by a clique of former state farm Director and current President Alexander Lukashenko. The internal situation is troubled. For many years the opposition did not dare take to the streets after December 2010 Lukashenka ordered to suppress the protests.

Sandwiched between mighty neighbours, Russia and the EU, Belarus inherited a weak economy, which is in constant decline, and the secret service called the KGB, but a relatively good system of education, especially in technical disciplines.

Such universities as State University of Informatics and radio electronics with its present 15 thousands of students was put the Soviet Union ahead in the arms race. Now every year they are dumped on the market programmers with skills almost as good as their German and American counterparts, and perhaps even more ambitious. And not such expensive.

Companies from Western Europe and the United States to poach talent

Within ten to twenty years Russia, Belarus and Ukraine to satisfy the demand of the West for cheap computer software. IT companies from Western Europe and the United States contain laboratories at universities and entice talent. But increasingly, the Belarusian companies enter the world market with its own digital products.

Game developer Wargaming released in 2010 amazingly popular simulator tank battles World of Tanks, one of the most successful in the world of online gaming. In Wargaming, there are four thousand people, the company has offices in different cities from Emeryville, located near San Francisco, to Tokyo. 2.2 thousand people work in Minsk. Turnover is approximately $ 600 million.

Epam Systems, software, the creators of which come from Belarus, from 2012 listed on the new York stock exchange, but continues to program and conduct research in the old country with approximately eight thousand employees. “Rockets and bombs was the task of science in the USSR”, — says Sergey Sergienko. He directs the Engineering Excellence in software development and at the same time conducting research in the field of electronics at the University. “In the 90 years the production of microchips and computers ceased to be competitive, but human capital remains”. Its chair “Robotics and complex automation” is supported by companies including IBM and Motorola.

In the development of messenger Viber, carrying out calls and sending messages through the Internet, was also involved and a young resident of Minsk. The app was designed in tel Aviv and sold for $ 900 million to Japanese Internet conglomerate Rakuten. The development and programming mostly stays in Minsk, while the headquarters because of low tax and legal security were transferred to Cyprus or in the United States.

The recent Belarusian history of success — application “MSQRD” (pronounced “Masquerade”): mobile app for processing photos and video in real time. Movement of the finger can be worn on the head helmet of the comics character Iron man, to turn the face in the face of a monkey or to see yourself with the features of Leonardo DiCaprio. Last year the owner “MSQRD” became Facebook.

Online magazine of opinion and the algorithm for viral content

Back to Daria Minsky. In 2009 she founded Kyky.org sort log views in the network. One of her columnists is now in custody. Kyky.org was the first Internet site that completely blocked for a week by the government. “I received threatening letters, I was scared,” she says. Something had to change.

Daria has achieved a European scholarship and went to University Instituto de Empresa in Madrid, one of the most prestigious economic universities. Then she began to ponder what to do next. The development of the online magazine in Minsk in the end, would become a constant struggle.

During her story by our table is its chief editor and puts a stack of papers for her to sign. One of the three partners of the project Kyky.org sells his share in the company of Daria and the second partner. Now have to deal with the paperwork. But what Daria will achieve with the development Kyky.org may at any moment disappear.

Maybe start a new journal in the West? “I’m not a native English speaker, and someone in new York interested in some girl from Eastern Europe?” There she nobody, and in Minsk know her.

“I think strategically: I come from Belarus. How can I use my connections here to become successful?” Risks for one chance for another. “So I switched to the technique. Talking about the technique is relatively safe”.

Daria found candidates in physical Sciences Dima and max, and founded with them the company “the Exhibitor”. Together they created an algorithm that supposedly can predict whether text in the Internet viral hit.

Still doing the “Exponent” went well: investors were more than satisfied. From Finland and Lithuania came requests: do you want Daria, Dima and Max to register the “exponent” in there? Spain immediately granted visas for the team, and the US state Department has provided them with scholarships. “Where would you like if I succeed?” — “It doesn’t matter. Where will be the best offer.”

A few hundred meters from the restaurant on the stage of the technological festival “Create IT” sits Andrew Yanchurevich. “Please welcome Andrew from our famous startup called…” the presenter and turns the microphone to the audience, which yells: “…a Masquerade!”

Andrew wears black clothes and in the Belarusian manner does not change in the face even during the applause. He is the Creator MSQRD and ran it. But the rest of the team MSQRD is now in London. Andrew, the Manager, decided to leave the team, stay in Minsk and start something new. “The Americans are grinning all the time,” he says, chuckling.

After his speech he walks across the lawn in front of the old factory, the building which passes IT the event. As the creators of “Esponenti” Daria, he studied at the Minsk University of radio electronics. “Masquerade has appeared on 48 hour hackathon”.

International companies do not trust the firms from the former Soviet Union, says Andrew. However, his new firm he wants to create in Minsk. “With my people here.” At the moment it is still difficult to sell products in stores Apples App Store and Google Play. He hopes that new laws will soon improve the situation for developers.

State media, meanwhile, also celebrated the success of the so-called high-tech parks, special economic zone, in which the startups pay less taxes. They report that there soon will have to invest one billion dollars. “Well, Yes, just one billion”, — says Andrey.

On the eve of several other developers met with Belarusian officials and authorities. They asked how the state plans to do with startups and the IT industry in General. “Sometimes it’s best just to do nothing,” replied they said a senior official.