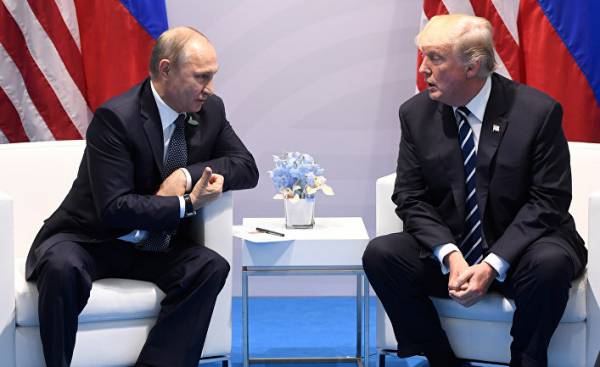 At the end of last week, the world was riveted to the second largest city of Germany, Hamburg, where he held a summit of the leaders of the economically leading countries (G20). However, the focus was not so much the agenda of the summit, scheduled during the first personal meeting between the presidents of the United States and Russia — Donald trump and Vladimir Putin.

The meeting, according to the official wording, was held in “friendly atmosphere” and instead of the originally stipulated 30 minutes lasted two hours and 16 minutes. However, the negotiations did not lead to significant changes in the relations between the two superpowers, despite the fact that some agreements were reached.

So, the presidents of the United States and Russia agreed that they support forces on 9 July, a cease-fire in southern Syria. An agreement was reached to establish a special channel of communication on settlement of the Ukrainian crisis and the need to respect the Minsk agreements, the creation of the joint working group on cybersecurity, which allegedly is to reduce the tension in the question of the possible intervention of Russia in the U.S. presidential election. But if to estimate objectively, each party remained in their previous positions.

Before the meeting it was emphasized that the main goal of the talks is not any specific agreement, and movement towards normalization of relations between the two superpowers.

But here we have to reckon with the existence of strong opposition to Trump and his desire to normalize relations with Moscow.

For this reason, the freedom of action of President of the United States in this direction is quite limited, with many initiatives there are doubts that Congress will not support them. The political situation in the USA is still so tense that Congress and most of the liberal media, in all likelihood, ready to aggressively oppose any plans of trump, who do not respond to their ideas on how to act the President of the United States. This uncertainty is reflected in US foreign policy, moreover, to such an extent that U.S. officials of high rank are regularly challenged even the statements of the President.

As a result, and in Russia, where in General, the talks trump and Putin is viewed as a very successful, informal attitude to the possibility of the beginning of normalization of us-Russian relations are still very cautious.

It is important that Russia also enough opponents of such a development, because the existence of sanctions is seen mainly economic benefit. But at the same time, the first step to normalize relations between the US and Russia made, although it is not known when will be next and will follow it at all.