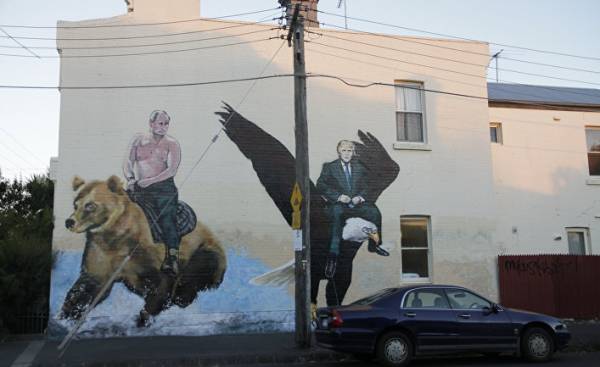 Congressman Republican from North Carolina and veteran politicians Robert Pittenger — a staunch supporter of the policy of U.S. President Donald trump. Pittenger previously worked in the congressional budget and Finance, and he is now a member of the working group which prepares proposals for reducing conventional military action and terrorism.

LA: IN mid-June, a supporter of the policy of the Democratic party, Bernie Sanders shot his colleague — Congressman-Republican Steve Scalise. How is a direct manifestation of aggression characterizes the political culture of the United States at the present time?

Robert Pittenger: Attack on congressional Republicans came from the left circle. This is very bad, and the situation is reprehensible. Certain political groups, which attract, including actors of Hollywood, deploy campaign, they say, almost no need to bomb the White house. Central Park is a theatrical performance of “to Kill a President trump”. To me such actions are not like many of the ideas that were in the policy of the former President Barack Obama. In political discourse, the Republicans are portrayed as neo-Nazis, and demonized. We all need to mute the tone of the rhetoric. In his time at the inauguration of President Obama, came all the invited Republicans, and the inauguration of the trump 68 Democrats ignored. Yes, people can be dissatisfied with the policy of the new government, but the respect you need to show. I think that the aggressive rhetoric inspires people to do bad things.

But trump also accused of verbal attacks on their opponents…

In US politics all attack each other. We all have to decrease the volume. We should consider the words that we speak. They may have not spoken with malice, but you must be careful. Trump is a businessman, he looks at the results, and it was not associated with diplomacy. Our government in the previous eight years had been stagnating, made specific calculations. Trump can get us out of this stagnation.

— Is it clear to you what is trump’s foreign policy? Often say that it is not predictable.

President trump is concerned about the provocations of Russia, China, Iran and North Korea. Of course, there is “Islamic state” and “al-Qaeda” (banned in Russia organization — approx. ed.) that characterize international terrorism. In a world of many different threats, it’s hard to choose one particular principal. First of all, you need to determine who our enemy is. Now the world is Islamic terrorism, that President Obama did not want to admit it. We must all work together — Americans, the Arab world, the Russians and the Chinese to defeat Islamic terrorism. Be careful when expressing their desire — will never be a perfect world, and Trump will need to cooperate with Putin to reduce terrorism.

— Your argument is still based on the fact that the blame for failure rests with you on the Obama administration.

I think Obama had a different approach to foreign policy than trump. I believe that a strong America makes the world a safer place. Obama believed that everything can be solved with a policy of containment, which is wrong. Former US President Ronald Reagan understood diplomacy. Same as the last Soviet leader Mikhail Gorbachev. He told me that you never told the controllers airspace block airspace to US planes. Obama, in his foreign policy included a lot of “red light”, creating various closed no-fly zone. Trump, in turn, understands how to appropriately use force.

— What does “use of force as appropriate” to the context of Syria and Russia?

— Syria is a big failure. In the ongoing civil war there involved a lot of parties. The US should have intervened five years ago, now the situation is difficult to resolve, there are countries that cover the “Islamic state”.

— When trump became the President of the United States, there were assumptions that he would be Pro-Russian in comparison with Obama. And these suspicions are not dispelled.

President trump has opened the doors for discussions with Chinese leader XI Jinping and at the same time opened doors for discussion with Putin, because I saw common ground where they can cooperate to make the world safer. But trump is no fool. He understands Putin, but not going to enter into the Russian leader’s arms. In this I have no doubt.

— At the time speaker of the house of representatives newt Gingrich spoke, the capital of Estonia Tallinn is a “suburb of Saint-Petersburg”. Whether this statement, in your opinion, correct?

— Newt was for many years speaker of the Congress. He talks a lot, sometimes even too much. I like it very much, a great guy, known him since 1980 when I first was elected to Congress. The comment about “suburb,” I don’t pay attention, because it is not our policy.

— The United States planned in the fall at the time of the Russian exercises “West-2017” to send to the Baltic States for more troops. How do you assess this step?

— It is a question of the Minister of defence James Mattis. On the additional presence in the Baltics I have in Washington had a conversation with the Russian Ambassador. He denied the necessity of this and claimed that “Russia should be able to protect themselves from all of you.” He didn’t understand why we place additional forces.