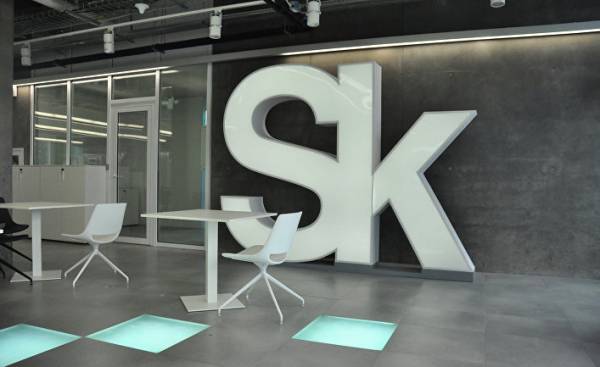 Finca Cristina, Karkkonen (Kristina Karkkonen) shows a flat object just bigger than the palm of your hand with lots of nipples. This educational robot company Robbo, she presented it in “SKOLKOVO”.

“These robots can’t move, but they have several built-in sensors, and they can do different things. I wanted to create something simple that would help to make programs, to study the various robotics and technology.”

6-7 June in SKOLKOVO held an event called Startup Village, which was attended by thousands of enterprises. Now the area around SKOLKOVO continues to build up, and soon there will be a center of biotechnology, such as the BioCity University of Turku.

The exhibition project Startup Bazaar was presented more than a hundred startups.

SKOLKOVO was founded in 2010 when the Russian President was known for his love of technology Dmitry Medvedev. Current President Vladimir Putin is not so much interested in the work of “SKOLKOVO”.

“Putin believes that the backbone of the economy are major government agencies and, probably, thinks that a start — up is a children’s Playground. However, there are those who think differently” — says Pavel Cheshev, Advisor Tekes, the Finnish company, which concluded with “SKOLKOVO” an agreement on cooperation.

According to Cheshev, startups should think about SKOLKOVO, if they have the products of high technology, which can be used, in particular, the Russian large enterprises.

“More than 70% of Russia’s economy is somehow connected with state enterprises. If the product is suitable for giants such as Gazprom or Sberbank, SKOLKOVO is the ideal place for development.”

The participants of the “SKOLKOVO” get, including tax breaks and grants. Bureaucracy, however, is booming, and the use of money sponsors are carefully watched.

It is a heavy condition for start-UPS, business strategy which can dramatically change. In some cases disputes between the companies and the SKOLKOVO Foundation came to court.

Many doubt the success of SKOLKOVO. Can the similarity of Silicon valley to emerge on the orders of the state? Cheshev reminds us that “SKOLKOVO” it is necessary to consider the shortcomings of the Russian system.

He says that SKOLKOVO is a wonderful place for the development of young enterprises. However, the “SKOLKOVO” are unable to justify hopes for the transformation of the Russian economy.

“It’s strange to expect that SKOLKOVO will be able to change the economy of Russia, if this is not undertaken by the government of the country.”

According to Cheshev, in Russia there is no market or customers for startups. So they run across the border when well enough.

Karkkonen a schoolgirl moved to Finland from Petrozavodsk, and now her company Robbo is listed in the “SKOLKOVO”. Here the company received the necessary assistance and contacts, he already has partners in the UK and Thailand.

The first investor was a Finnish businessman Pekka Viljakainen (Pekka Viljakainen), Advisor of the SKOLKOVO Foundation. He also carried out reforms in the “Mail of Russia”.

“Yes, that’s my baby. At the time I became a parent event Startup Village and fought against windmills,” says Viljakainen.

Viljakainen recalls that none of the startup was not in the “SKOLKOVO” was established: here the company only financed and get help.

“In SKOLKOVO 1.6 thousand enterprises, which employ over 30 thousand people”.

“In the construction of this new district to invest ten billion. However, not building the soul “SKOLKOVO”. His soul of enterprise”.