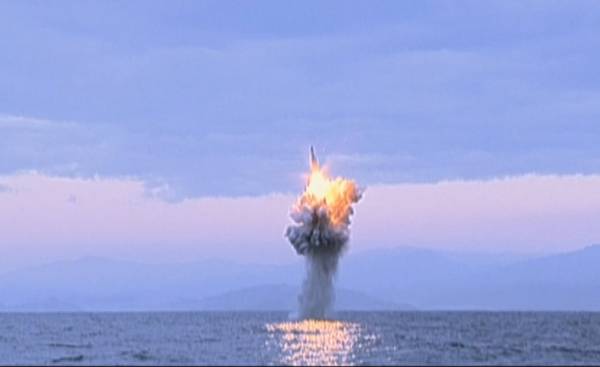 For North Korea, this is a great breakthrough in the threat to the West: the first military rocket reached a result that allows us to classify it as an Intercontinental ballistic missile.

According to the Pyongyang and Western sources, the missile Hwasong-14 flew a total of 933 kilometers, but 2 800 km in altitude and stayed in the air for about 40 minutes.

If it was launched into the sky not vertically but at a smaller angle, the range of its flight would have amounted to almost 6 thousand km, said the expert from Munich Markus Schiller (Markus Schiller) from consulting firms ST Analytics. And then she could reach the us state of Alaska.

According to international definitions, a rocket with a range of more than 5500 km is considered Intercontinental ballistic missile (ICBM). “It was a great success,” Schiller said. Now you need to carefully study the technology of the rocket.

Still Intercontinental ballistic missile was available to only the US, Russia, China, France and the UK. Technologically India is approaching this level.

The expert points to a different assessment of the missile among engineers and politicians. “For engineers, the work only begins now, because in the future rocket must reliably fire every time, not only in good conditions and with adequate training”.

Prototypes of military aircraft usually have more than ten years before actually transmit their forces. “It will take a lot of time before the missile can accurately hit the target, and it can be used for war. But they managed to make it so that it began to be perceived as a threat.”

Policy assess the situation not as engineers, says Schiller. “Politicians now believe that North Korea could theoretically hit Alaska. This is out of bounds”.

Enough to hit anything

The expert suggested that the model Hwasong-14 is a two-stage liquid fuel rocket, which in the West is called KN-14.

Schiller indicates that in 2012 North Korea has launched a satellite into space, that is, it has a booster for long distances. But it cannot be compared with the recently tested military missile.

Currently it remains very difficult to assess “what really can rocket, and that can be a useful load.” One of the biggest problems will be the technology to accurately hit targets. “The longer the range of the missile, the harder it is to hit a certain destination”.

The Americans and the Russians have invested hundreds of billions and for many years worked on the development of Intercontinental ballistic missiles that could hit the particular city. “But enough, if you get something to blow up in the USA. USA would regard it as an act of war”.

It can be assumed that the first Pyongyang will choose the easiest option as a weapon, for example, several hundred kilograms of plastic explosives as payload, with several detonators.

Much more complex and therefore more error-prone, would be nuclear weapons of different mechanical parts, which at the start and re-entry are exposed to enormous forces. In addition, the payload must be enclosed heat shield.

According to another expert, who asked to remain anonymous, the US has methods of measurement and observation of the trajectory that will help to more accurately assess the flight of the rocket and its potential danger. “One of the key questions is, what will be the weight of the transported payload, and how will re-entry into the atmosphere”.

Nuclear warheads have to transport the weight of at least 500 kg. it is also not clear whether the control payload before hitting the target, and how. It is reported that new housing homing Intercontinental ballistic missiles the US and Russia are able to from space to send nuclear weapons at the target with accuracy from 10 to 50 meters.