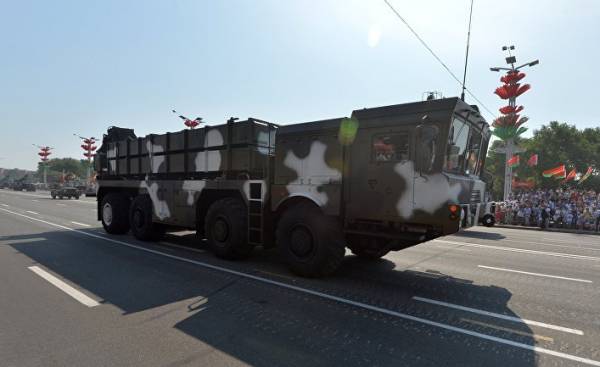 The 3 July parade in Minsk was struck by the richness of the range. In front of the podium with the high command was driven all the main objects of national pride, from jet systems of volley fire “Polonaise” to the meat and tubs of JSC “Keramin”.

Authorities in recent years (say even more explicitly: after Crimea) is clearly hyping this feast (de facto only the day of liberation of Minsk from the Nazis), with an emphasis on the motive of independence. But it is quite obsolete. In the style of the occasion is too much Soviet. Well, in addition, affects, to put it mildly, a lack of taste. The fact that the Belarusians are called “Masach Bob s Graham”. That is to try to combine incongruous.

The speech of Alexander Lukashenko at the parade in honor of Independence Day, reminded of the speech of the Soviet leaders the delineation of the contrast between the encroachments of the West on one side and our Holy struggle for peace.

“On the path of militarization has entered Europe. They get wrapped up in the arms race and military preparations. United States of America deploy here, on our borders, the missile defense system and improving its nuclear capabilities,” — said the Belarusian official leader, dressed in the uniform of commander in chief. He further stressed that “together with brotherly Russia, we protect borders we create the Union state”, and with partners in the CSTO and does “protecting the world from emerging threats.”

In fact, the picture of events is slightly different from this Manichaean scheme. Europe to the Crimea generally looked sloppy and, despite the prodding of Washington, ignored the NATO standard of spending at least 2% of GDP on defence. And the role of fried rooster, klonowska in a known place, performed for the West it was the annexation of the Ukrainian Peninsula (yeah, Moscow is so zealously defended borders of the Union state, even chop off a piece of another country!).

So the increase in expenditures of NATO countries on defense, promotion (though quite symbolic) infrastructure of the Alliance to the East — it is a response to the challenge, who abandoned the West closest ally of the official Minsk. Moreover, today the military-political Alliance with Moscow, hand on heart, was for the Belarusian authorities on a number of parameters is quite uncomfortable.

For example, now have to prove how the public and foreign, scheduled for September in our territory joint exercises “West-2017” will not lead to the deployment of Russian troops in Belarus, and never will be a prelude to some kind of aggressive action against NATO neighbours.

No matter how it was unpleasant to the Belarusian leadership, NATO strategists are considering the blue-eyed Republic purely as a satellite of Moscow, our Armed forces — as part of the Russian military machine. And flying over Minsk during a parade of Russian “Alligator” combat helicopters Ka — 52, the latest (generation 4) fighter-bombers su-34 (which Belarusian pilots, by the way, wouldn’t dream of) only adds to this image.

And in purely economic terms, Belarus is too dependent on Moscow, depends on its market and subsidies. To diversify foreign trade still does not work (and without reform will not work), growing credit debt to Russia. And these circumstances make largely meaningless high-sounding phrases about our independence.

Not much if the take Colonel Makarov?

It is also worth noting that in this year we especially hear the voices of the opponents of the parades in principle. Reasoning: the heavy equipment is ruining the asphalt and noisy, during rehearsals, half the town is in the tubes, tanks and aircraft pose a hazard to residents, the event eats up a lot of money that could be spent to better advantage, etc. of Oil poured into the fire incident, when 24 Jun hurrying to a rehearsal on the wet asphalt tank T-72B knocked down a pole on the capital’s Independence Avenue and only a miracle no one was hurt.

In addition, many are outraged by the statement of the head of the press service of the Ministry of defense, Colonel Vladimir Makarov, saying that against parades can only be the ideological descendants of the Gauleiter Kube (head of the occupying administration to the Nazis on the territory of Belarus during the Second world war). A more correct supporters of parades rests on the fact that it is impossible to call them a tool of dictators, militarized fashion shows are held in democratic countries — France for example.

Probably not so much in the parades, is debatable. There’s even the leader of the BPF Alexei Yanukevich, as it turned out, for parades, saying that citizens and outside observers have to see the power of its armed forces. Another thing is that active, critical citizens annoyed by the lack of accountability of the government, which believes need, for example, to disclose the cost of the event. And arrogant (not to say rude) tone that other figures in uniform indulge in discussions with civil society. In the spirit of: if you’re so smart, why systems do not go?

The army is there on the taxpayers ‘ money, is all the people (the representatives of which can be a variety of views, and that’s fine). And therefore not the business of bureaucrats in uniforms sculpt dissent offensive political labels. Your job is to protect the Homeland, not ideological conservatism to deal with. And if we talk about ideology, it is not time for the authorities to deal with the Belarusization of the armed forces, the rise of national consciousness of the people in the khaki? After all, the naked eye can see that many of them Russified brain. Really learned nothing from the bitter lessons of Ukraine, which during the conflict with Moscow has faced among other things with the cheating part of the military?

Personally, I “brought” civilized part of today’s show. It had to be seen! In late may, the President ordered that the parade was shown and examples of modern civil engineering, which are produced in the country. But the result in front of an audience and TV cameras was driven on wheels MAZ the whole ENEA: furniture, plumbing, canned meat, etc.

And I think I understand why it looks like trash it in conjunction with a military parade. Military equipment is really designed to move, she has wheels, tracks, wings, jet engines — in short, the dynamics attributes. A mighty battle machines with their special predatory aesthetics of many is a genuine thrill.

But when on the platforms of heavy duty trucks driven what must lie quietly on a table or stand in the corner, there is a comic effect from the passage by the stands with important figures of all these sausages, beer kegs, sofa beds and (the apotheosis) of sanitary products. Well, at least I did not think to transport an acrylic bath with a helicopter and not put it to wash an activist of the Belarusian Republican youth Union.

Well, the dance of tractors “Belarus” in the straw Bryl, pulled down a cabin, and with a mustache on the hood — with all the skill of the shooter is also, perhaps, a spectacle on the fan (except the musical accompaniment in the song “Kas Yas konyushinu” was a definite plus in the background totally Russified).

And then, the show of military equipment, if bluntly, is intended to scare potential enemies, and whom we meat scare? Sausage bomb? Washing machines with vertical takeoff?

We don’t get a strong army in the Soviet economy

Yes, I’m being ironic, but as achievements of a national economy is all the last century. Today they rule IT, and steep soft domestic production mazah not provezesh. The authors of the show are trying to combine incongruous.

It’s like a green ornament on a red background in the design held in the capital on the eve of the Day of embroidery. Yes, ideologically aligned, in the colors of the official flag, but this is not the Belarusian tradition. Well, why so afraid of the “seditious” white-red-white combination, supposedly plays up the opposition? It’s just the original Belarusian color. Yes, and the whole style of the next Day embroidery gave social media a new reason to pajaziti on the topic of Agrotrade. I’m not talking about a bad taste, as attempts to combine embroidery with the costumes eared-horned banschikov, which makes the event quite so ridiculous a masquerade.

If we return to military parade, the enthusiasm of military speeches (like: the army is equipped with everything necessary to give a rebuff to any aggressor) looks strained. In fact, we saw mostly renewed samples of more Soviet equipment. Yes, the Belarusian military-industrial complex works well, especially compared to other industries. He has a whole range of these new products, but they are designed mainly for export. Our army on this just do not afford. Due to the economic crisis the defense budget of Belarus shrank to an accident half a billion dollars. Yes batch of su-30CM, which we are going to buy from Russia, more expensive! And we don’t get a strong army, while the country will not be a strong economy. And she is today still largely Soviet. And it is even sadder than the Soviet elements of the official celebration.