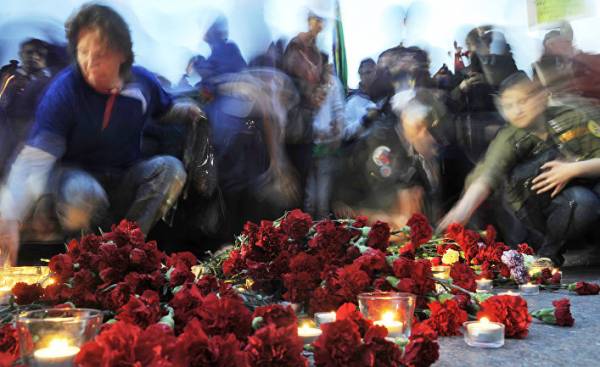 Podolsk, Russia. — Onetime Soviet Director of the plant Vladimir Melikhov has survived a brutal struggle for control of the business in the 1990s and made a fortune doing construction. Now, he invested his money in business, which in Putin’s Russia is really a threat: a study of Russian history.

Melikhov founded a private Museum dedicated to the “anti-Bolshevik resistance” and touches on a taboo subject — the reasons why Cossacks and other Soviet citizens persecuted by his own government at first supported Hitler’s invasion of the Soviet Union in June 1941.

The Museum, housed in a three-storey structure, which Melikhov personally built on owned land in Podolsk, South of Moscow, not trying to whitewash the collaborators. However, he angered the authorities that shed light on the endless persecution that followed the Bolshevik revolution of 1917 and created the fertile soil for the emergence of defectors in a war that cost 25 million Soviet lives.

“Really they don’t like what I make people to understand what happened in the past and what is happening today,” said Melikhov.

In the result he was called a traitor on state television, the Russian border guards left with his passport, to prevent him from leaving the country, and he faced a string of lawsuits, apparently fabricated. Last week, the Podolsky district court found him guilty of illegal possession of weapons and sentenced him to one year “restriction of freedom” — house arrest or other restrictions of freedom of movement.

The hostility of the Russian authorities to Melikhov, indicates how sensitive the topic is the history of the Second world war, known in Russia as the great Patriotic war — especially at that time, Putin and his entourage use it to strengthen his own position.

They expose themselves as the true heirs of those who fought in the time of patriots and expose their opponents — such as the corruption fighter Alexei Navalny, who organized last week’s nationwide anti-Kremlin protests — as corrupt traitors like collaborators with the Nazis.

After communism collapsed, and liberal capitalism as the alternative has lost its appeal, the Soviet Union’s victory in the war against the Nazis turned into an untouchable cornerstone of the new state ideology, built around the story of Patriotic self-sacrifice, discipline and national unity, and free from all unsightly moments.

“The myth of the great Patriotic war serves as the basis for an entire mythology of modern Russia after 1991, — says Sergey Bad, the Russian-born Harvard historian. All that questioning this myth of the victory of Russian people over the hostile West, or brings in the shades of gray in black-and-white image of the struggle between good and evil, is faced with rejection and attack.”

Melikhov is not the only one who was the victim of such persecution. Recently in Moscow, the state Commission has blocked the decision of the St. Petersburg scientists to award of the doctoral title of historian Kirill Alexandrov. His thesis Committee for the liberation of peoples of Russia — the institution established with the help of the German in 1944, in order to attract opponents of the Stalinist regime — was recognized as being insufficiently Patriotic.

Melikhov believes that for the authorities the main crime had become not only an unbiased study of his Museum in Podolsk, Rostov-on-don, the history of the hated traitors. The bigger problem, he said, is that open discussion of the choices made by the Russians in the war, thwarting the efforts of Putin to unite Russia around the heroic deeds of the past and his hostility to internal and external enemies, osdevcon according to the Kremlin the country.

All that was among the evidence presented against Melikhova in court — a decrepit 19th century rifle and a bunch of ammo, it is not appropriate to owned weapons. Melikhov says that the bullets he put investigators.

“I came face to face with the bandits in the’ 90s, but now it got worse: against the government is impossible to fight,” he said in an interview on his estate — a walled complex of brick buildings, lush gardens and pond, built in the former Soviet dump.

If not for his interest in history, 60-year-old Melikhov could fit into what wants to see Putin’s Russia: a state based on traditional values and machismo patriotism.

Melikhov — a descendant of the Cossacks, free horsemen who were guarding the borders of the Russian Empire and was at the forefront of nationalist movements after the collapse of the Soviet Union in 1991. He is also an Orthodox Christian, to build a beautiful wooden Church near his home in Podolsk.

However, the years of working on old books and documents convinced Melikhova that encourage Putin and his supporters in the Orthodox Church “Russian tradition” was in fact grossly distort history.

According to him, although Putin helped to get rid of the Soviet hostility to the Cossacks, who supported the anti-Bolshevik forces in the civil war 1917-1922, he forgot about a key element of the Cossack world.

“The main value for a Cossack always had his own freedom,” said Melikhov.

This interpretation Cossack traditions, which many still associate with violence and cruelty in the service of expanding the Russian Empire, provided Melikhova unexpected support among the Russian liberals.

Among his loyal fans included Andrei Zubov, a liberal historian, dismissed with seats in the prestigious Moscow University after he compared Putin’s seizure of Crimea with Hitler’s actions in 1939. Teeth quickly earned a place in the list of “traitors” drawn up by supporters of Putin.

“Communism as an ideology is dead, he says. Communism is no more. However, the Soviet way of thinking and the Soviet variety of imperialism, which the authorities strive to protect from the historical facts.”

If you call someone a traitor, added the Teeth, it allows you to end any discussion. “The traitor is the enemy, and to be so monstrous, but for our government it has become another name for anyone who hold a different point of view.”

A website called “predatel.net” (a traitor.no) contains a list of representatives of the Moscow intelligentsia and others, betrayed by his idea of his country, and invites readers to fill in the form and add to the list.

It is unknown who created this website, but its message is consistent with what tirelessly spreading the Kremlin and controlled by him since the beginning of the Ukrainian crisis in 2014, Russia is threatened from within and without by the enemies, which must identify and neutralize.

According to Melikhov, the last initiated against him was not organized by the local Podolsk Prosecutor’s office, but the Moscow Department of the FSB, which replaced the KGB’s internal intelligence service, after he publicly supported the opposition political party in last year’s parliamentary elections.

He also opposed the annexation of the Crimea — the main indicator of the alleged betrayal, accusation in which Melikhov considers an instrument in the struggle against those who publicly expressed their disagreement with the Kremlin.

According to him, this makes two of his Museum in such a threat: they encourage thousands of regular Russian visitors to reflect on their own history and to question such crude labels as “patriot” or “traitor”. They also exacerbate questions about the official coverage of the war has already been raised without much fanfare historians.

Formal interpretation tends to downplay the significance of the Pact signed by Stalin and Hitler in 1939, his bloody purge in the ranks of the officers, conducted in the 1930s, and the constant pursuit of suspected internal enemies to the very beginning of the Nazi invasion.

In the guest book of the Museum, one visitor wrote: “Thank you to the founders and caretakers of this Museum for the opportunity to look at the pages of our history who try to hide from us authorities.”

In its effort to secure official picture of heroic unity and almost supernatural endurance, government is increasingly limiting access to the historical archives opened after the collapse of the Soviet Union.

They also struck historians questioning such famous legends as the story of the 28 Panfilov guardsmen, supposedly sacrificed themselves to defend Moscow from the German army in winter 1941.

For a long time served as Director of the State archive of the Russian Federation Sergey Mironenko was fired last year after he exposed the story, invented by Soviet propagandists.

In response, the Russian Minister of culture Vladimir Medinsky who hold deeply conservative views, declared that inconvenient historical facts should not stand in the way of important national myths.

The Minister ordered to treat the heroes of the war, such as the Panfilov and his soldiers as “Holy”, and those who put their feats into question, called “scum” and wished them “burn in hell”.

A previous version of this article contained an erroneous statement about the date in which Podolsky Melikhova court found guilty of illegal possession of weapons. It happened last week, June 13, and not “Tuesday”.