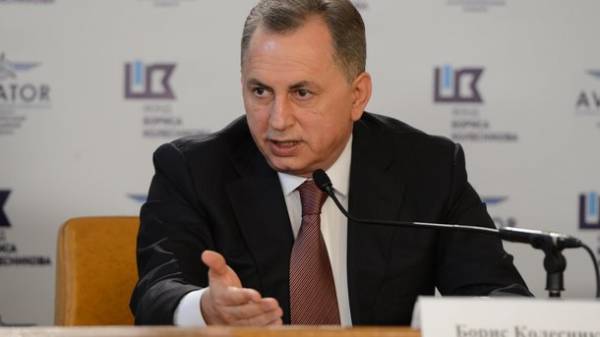 On 27 August Ukraine celebrated the miner’s Day is one of the main professional holidays of the year for thousands of our fellow citizens. Unfortunately, not everyone is now just in the coal industry in connection with the events in Donbass. However, the industry lives and works on the country’s economy.

On the present and future of the coal industry, its prospects and the needs we talked to a prominent businessman and politician, a native of Donbass, head of the Oppositional government of Ukraine Borys Kolesnikov.

— Boris Viktorovich, how important for Ukraine mining industry coal mining? What is its impact on the economy and life in General?

The industry is very important, both for industry and for energy. And what is happening now, because of the events, the import of coal to Ukraine, the country deals a double blow. First: remain unclaimed Ukrainian coal, as a result, the Ukrainian experts, the country as a whole loses the gross domestic product. Second, these purchases are spent foreign reserves, which negatively affects the export-import balance of Ukraine. The imports greatly exceed exports, and this is a road to nowhere.

— What is the state of the mining industry now and what to do to help her to the best position?

— Now, when there is a war, of course, hard to talk about progress, but if we take normal times, mines should be effective, efficient and usually private. Effective owner will think about the development of mines, will address issues of technology related to the production, and the social, to care about people’s lives, their health, leisure, and so on.

You know that today there are supporters to close all mines under the slogan to their unprofitability. To such supporters, there are three questions. One will have to work dismissed people, professionals, long time worked in the high-tech enterprises with a high level of income, how they feed their families? Second: what about the environment and what consequences that will entail the flooding of the mines? Who is behind these consequences (and they will definitely negative) will be the reply? And third: where, in fact, after the closure of the mines to get coal? So we’re back to the beginning of our conversation…

All these above mentioned problems the government should solve in the complex.

Even highly developed countries such as the UK, experienced in this way difficulty: as with minimal losses to close unprofitable production and at the same time to make the most efficient promising.

Today, Ukrainian coal private enterprises need loans for deep modernization, which will lead to a sharp increase in wages. But it has to be loans under normal adopted worldwide interest 3-5% per annum, as a medium-term (3-5 years) and long term (5-8 years). Then you can save a large number of jobs, to invest in exploration, in the end, to make the coal industry viable and quite promising.

About promising mine or not, can be cost-effective, it is necessary to carefully consider. Mine is the same factory or plant only with a fairly complex production environment. And can not be “average temperature on chamber”, each company needs specific profound analysis. We will do this analysis. And the power, any present, future — must understand that coal production is a strategic industry that directly affects the economic security of the country, and, consequently, national security of Ukraine. Because of short-sighted are those politicians who are talking, they say, mines cheaper to close than to produce in them the coal. Yes, mine is very developed, but you cannot decide indiscriminately, as has already been mentioned above. Needs to be a clear program, where there is a place for each production and everyone.

When in the UK in the 80s, carried out the restructuring of the coal industry, even the Prime Minister Margaret Thatcher initially was not without errors. This is a theme for separate big conversation, but I will say that this experience need to take to study step by step and try more mistakes to avoid. And each of the highly developed countries of the West we have much to learn, including about the coal industry, it would wish.

— How high is the value of the coal in the modern world? Can it completely be replaced by something?

— On the Discovery channel there was a film of huge energy supply, energy intensive and the beautiful city of Las Vegas, built in the desert. Where, note, too much sun and Sunny days. The film shows the solar panel nearby, and said: that’s the way… covered 2% of the needs of the Las Vegas strip in energy! And the other 98% is covered by thermal power plants, to film their show, like wagons with coal, as in any mining town… Here is the answer to your question.

— Nuclear energy will not replace coal?

This is a full replacement anywhere in the world, nuclear power plants are not replaced thermal stations. Yes, science is moving forward, develop modern renewable energy sources, but the complete replacement of coal and, I think in the next 25-30 years will not. And anyway, “green energy” is the lot of only the very richest and most advanced countries, as it requires huge investments in science and construction of fixed assets. About this respected magazine The Economist wrote many years ago.

— How are things with related industries, e.g. coal engineering?

In principle, the industry is well-developed. But in the world there are examples of more impressive based on cooperation, on the purchase of new technology or development joint ventures. So at the time, raised after the Second world war its economy Japan. Nothing is impossible, and for us, the main means of production we have, we need to introduce advanced technology. And, of course, need a demand of production, new orders, and with that, you know, while there are difficulties.

— You yourself, your family are related to the miners? There were underground? What will you wish to miners, yesterday celebrated the professional holiday?

— My parents, both mom and dad, — mining electromechanics. They met in Dnepropetrovsk mining and distribution went to the Donbass, where all life and worked. So I’m on mines I know firsthand since childhood, and under the earth, of course, been times. And I want to wish the most courageous people on earth, miners, his countrymen, first, a speedy peace, health and prosperity in every family. I believe in the industrial Ukraine, although agriculture is very important. But the industry is still important for Ukraine, that’s my belief. The miners here is one of the leading places.