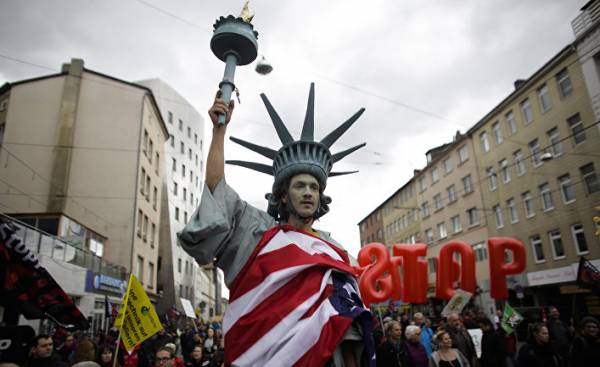 27 Jun Angela Merkel called for the resumption of negotiations on the Transatlantic trade and investment partnership between the European Union and the United States, which were stopped after the election of Donald trump.

Atlantico: what are the main pillars of free trade in Europe? What most European governments actively advocate for this economic course and have the greatest impact?

Christophe Buyo: the Main pillars are the battalions of Orthodox Economics (at universities, economic agencies, at national and European level), the European Commission and representatives of large European companies, in particular in the framework of the BusinessEurope.

Do not forget about the major liberal and conservative parties (the European people’s party, Alliance of liberals and Democrats for Europe…) and also a significant part of the social-Democrats and socialists (Party of European socialists). As for governments, the pursuit of free trade can be traced primarily from export-oriented countries of North-Western Europe (Germany, Netherlands, Denmark, Sweden, Ireland, UK, etc.). To the greatest extent this applies to Germany, which built their entire strategy of postwar economic growth on the conquest of European and world markets.

— Where are the weaknesses in the support of TTIP and free trade in General? Does not the position of several European governments in this matter the opinion of the population?

— First of all, it should be noted aversion on the part of some industries that feel threatened (as reasonably or not) for their existence in the case of expanding free trade. It can manifest even in those countries that support such a course: in Germany, working in solar energy companies tried to win the support of the government to combat the existing, in their opinion, Chinese dumping, but authorities decided not to intervene.

Further, there is more ideologically colored opposition from both sides of the political spectrum in the name of protection of employment and number of values, for example, food quality or national independence. Judging by the vote in the European Parliament and the mobilization of associations, there is some left over, which is seriously opposed by the supporters of free trade actions and arguments. We note the following fact: the head of Wallonia Paul Manette (Paul Magnette), a socialist and Professor of political science, tried to block the adoption by Belgium of a Comprehensive economic and trade agreement with Canada, while in power in Poland and Hungary, radical right had nothing against him.

Created in 1990-ies, the Association for the taxation of financial transactions to aid citizens consistently opposed free trade agreements, and in this she is not alone. These movements has long enjoyed support from the outside the box mylasa economists, and I just get more and more assistance from the more Orthodox-minded experts who recognize that in the field of freedom of trade, all is not rosy. Recently, it was forced to admit that even the European Commission: not everyone wins from free trade.

Finally, there is the population and voters. Polls and election results show that the more benefit the residents derive from free trade and globalization in General, the more they support it and Vice versa. For example, the Danes are in favour of free trade, and the Italians it raises doubts. Those who lose in the game don’t have any desire to continue it… what a surprise!

In France, the rejection of free trade is due to the fact that the majority of the French believe that globalization is to their detriment. And in most cases they are right.

— For any scenario TTIP becomes almost inevitable for the United States and Europe?

— If we consider all the long term economic openness of the West after 1945, declared protectionism Donald trump do not seem to be winning. At the moment he is the strongest isolation in the Western world and even among the majority of world governments. If trump were to leave, or break the promise, the powerful trend toward expanding free trade will continue, probably in a new variant of the TTIP.

Anyway, it is worth noting that the regulation of free trade can go our separate ways. One of the main reasons for dissatisfaction with existing agreements is that they put first the interests of only the big international companies to the detriment of the States, the workers, the taxpayers and the entire world. Economist Thomas Piketty (Thomas Piketty) has been proposed to balance the TTIP with the help of measures of harmonization of tax systems. Unified taxation by the Euro-American space is not too pleased with Apple, Google and Starbucks… These companies would be ardent protectionists. Such convergence could also be conducted on environmental and social issues. The promotion of this time should be addressed by the international labour organization, which was formed on the basis established in 1919 by the International labour office. Now she couldn’t do anything, but why not try to advance further in the case of these new free trade agreements? If the average American would be entitled to the same leave and social security as the average European, free trade the two shores of the Atlantic certainly would have seemed more reasonable step significant number of people.