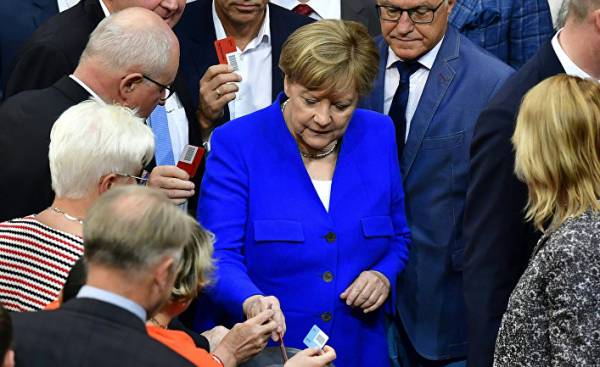 When David Cameron (David Cameron) almost a year ago last answer as the Prime Minister in the lower house of the British Parliament to the deputies ‘ questions, he said he will never forget one day. One of the employees who worked at Downing street 10, near the entrance, said to him: “I’m not particularly interested in politics, Mr. Cameron, but your people made it so that this weekend I will be able to marry the person I love my whole life.”

This, according to Cameron, is the most wonderful moment in his work.

Conservative Cameron for a long time was no fighter for equal rights of gay marriage, but when he realized that this development is not stopped, then decided to at least take a lead and declared it a conservative project. At the party Congress in 2011, he said: “Conservatives believe in the ties that bind us, that society will be stronger if we give a promise to mutually support each other. Why I support same-sex marriage: not because although I’m a conservative. I support gay marriage because I’m a conservative.”

It is hard to imagine that Angela Merkel, when she will no longer be Chancellor of Germany (in which, strictly speaking, it is hard to believe) with pride will remember a time when she had made possible in Germany marriages for all. That lesbian women and homosexual men will approach her and to thank and praise her for her clear recognition that she gave them to feel that their relationships are nothing other compared to the relations between men and women.

Some history to explain the change of course

For there is no recognition from Angela Merkel. Still there was no recognition against full equality, and now there is no for it. Four years ago, it was only recognition of his “internal feeling”, which made her doubt the discussion about adoption and the adoption. And now there is an anecdote about a chance encounter with one lesbian who with her partner cares for many foster children, which again makes her doubt his “internal sense”.

It is suitable to disregard all this, because this alleged key moment existed some time ago. He probably would have declared it a key point to have a story to explain the change of course, when it will have to do — if possible, in passing.

“Merkel has never been across the path of those events, which she believed inevitable,” writes the newspaper “FAZ”. If the Chancellor is not at all any belief, then this belief she has.

Now you can congratulate strategically brilliant trick, which took away from the SPD election theme, and the way rebuked her a Chancellor candidate, Martin Schulz (Martin Schulz): the fact that she evades substantive controversy and political dispute. In fact, she didn’t even turn back, but only to the side: step to the sidelines.

And, being a fighter for equal rights of homosexuals, to celebrate the expected result of its step, later the permission of marriage for all, and to ignore how shamelessly it happened.

However, this method of the Board something is lost — namely, the respect. Pragmatism Merkel is disrespectful to the arguments and beliefs, and it is disrespectful to this political process. Characteristically, she complains that the introduction of marriage for all is now a topic of political debate, and thus it should be: an open discussion between different positions, with the ability to clearly define yourself as the party. Merkel for many years prevented this debate and even now wants to evade her, when she no longer can it be prevented?

Conversely, respect for the policy of Merkel is lost. Its unlimited flexibility, its the principle of bad faith are undoubtedly the decisive cause of its success. You can rely on the fact that at the decisive moment of her own beliefs does not stop her from being able to jettison existing still installation. A man without beliefs: it seemed that in this complex, rapidly changing world, it will become the best Prime Minister.

But at the same time — and not only Martin Schulz — the desire to see the policy, with which it would be possible to argue on the merits, which operates on the basis of beliefs and values and passion and arguments explains the change in its position.

Maybe even a conservative who by his deep religious belief is fighting against equality for lesbian, gay and transgender people, and then in 2017, sees himself in the position of a small minority, deserve more respect than the leader of the party, which can only switch from the “better not” with “can be, and will not hurt.” Pragmatism is a virtue in politics, but promiscuity does not deserve any respect.

Perhaps an abject waste of Merkel towards the decisive moment was not a brilliant trick, and its self-exposure.