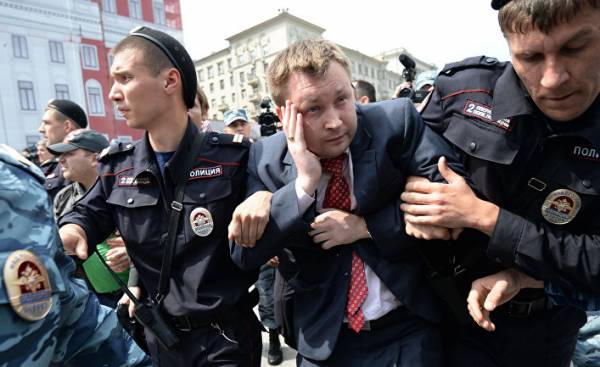 Three Russian gay activists managed to win the first fight with the Russian authorities. The European court of human rights condemned Russia for the so-called law on prohibition of propaganda of homosexuality

It all happened contrary to expectations. “Sodomites” and “perverts” who were sent to the Russian law banning homosexual propaganda, inflicted the first defeat of the ultra-conservative majority of Russian lawmakers. Last week the European court of human rights condemned Russia for discrimination and infringement of freedom of expression in the adoption of the law banning propaganda of homosexuality.

Members of the LGBT community argue that after adoption of law in 2013, attacks on gays have increased. Three activists for the rights of sexual minorities decided to appeal to the European court of human rights. Nikolai View, Alexey Kiselev and Nikolai Alekseev are well-known representatives of the Russian LGBT community. All three were fined for the assertion that homosexuality is “normal” phenomenon, not “perversion”. Before you appeal to the European court, the applicant sought to appeal against their conviction, but failed.

74% of the population believe that gays have mental problems. Less than half believe that they should have equal rights with everyone else. The constitutional court of the Russian Federation, as a significant portion of the population believes that “the prohibition of propaganda of homosexuality is justified by the risk that such propaganda may form a distorted view about the equivalence of traditional and non-traditional relations between people” and to guide children in the direction of homosexual relationships. The European court said that such a position was “incompatible with the principles of equality, pluralism and tolerance in a democratic society”.

State Duma Deputy Vitaly Milonov, the main inspirer of this act, considers that it is aimed only at the protection of morals in the country. “We don’t want in Russia were gay propaganda among minors,” said he to the correspondent of El Models in one of the cafes in the center of Moscow. Russia reminds Milon, “is a country of traditional values, and society has a democratic right to choose for themselves the laws. We spoke in favor of a law prohibiting conduct among minors the promotion of non-traditional family relations”. According to the Russian legislation, violation of this law entails a fine in the amount from 4 to 50 thousand rubles.

The majority of Russian citizens, according to the legislator, are believers, “and all are represented in the state religion, covering 80% of the population are opposed to the distortions spread among children.” As Milon says, “what most surprised the Russians, so that’s why homosexuality is allowed in the rest of Europe”. And as an example cites the old case: “resolution on gay propaganda in Sodom and Gomorrah, which didn’t end well”. In the same year, when he initiated the adoption of the law banning propaganda of homosexuality, demographic studies have confirmed him right. According to the results of a survey conducted by the Levada Center, 74% of Russians believe that gays and lesbians have mental problems, while half believed that they should have the same rights as everyone else. Thanks to his sharply negative attitude towards gays, the Government has made a dizzying political career, becoming a regional legislator to the state Duma. He is a frequent guest of television programs.

Nikolai Alekseev was the first Russian who defied this law, which prior to the adoption in the entire country was run-in some regions and cities, particularly in St. Petersburg. Alekseeva punished as a warning to others. His crime is that he organized a protest in front of the city hall building of Saint-Petersburg. “Homosexuality is not a perversion. Perversion is hockey on grass and ballet on ice” — was written on the banner which he held in his hands. Alekseev said that “the procedure for the application of the law shows that it is not aimed at the protection of minors, and what to banish from the public sphere of LGBT people”.

Alexey Kiselev left the country in 2012 after he participated in protests against the return to power of President Vladimir Putin.

The third “bandwagon activist” — Nikolay View that answers the questions of our newspaper and at the same time celebrates the victory. He was arrested in 2009 in Ryazan, one of the first regions that started the “legal” persecution of gays. Their worst crime was that they organized a picket in front of one of the libraries and held posters with inscriptions: “Yes, I’m gay, ask me about it” and “Homosexuality is normal”. Now as explained by this activist, their purpose was “to initiate the legal process to undo these homophobic laws, “so that the European court of human rights is my last hope, after I registered my complaint in 2010.” Baev, currently residing in Moscow, believes that “the protection of minors is only a pretext, and the main goal is not to give the LGBT community an opportunity to Express themselves Russia.”

The European court held that “the very purpose of the laws and the form in which they were used against the applicants, was discriminatory and did not serve legitimate state interests.”

Article 121 of the criminal code, under which homosexuality was punished by imprisonment, was repealed only in 1993, when homosexuality was no longer considered a mental illness. ROC considers gay parades “blasphemy”. There is still a long way to go. As explained by the bais, “this is the first judgment will not change anything, because Russia will not comply”.