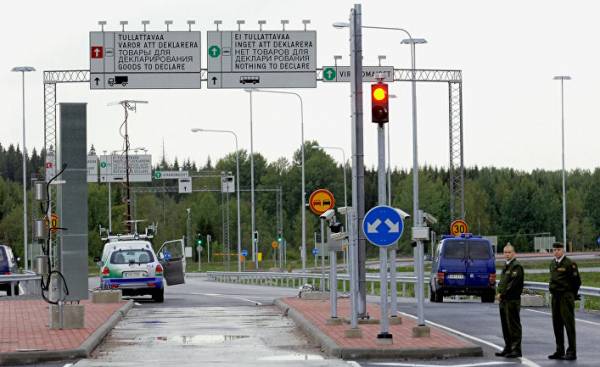 “We usually are not talking about the events in Ukraine. We are trying to do their job professionally and not deal with politics”, — says the head of the border guard service of South-Eastern Finland Colonel ismo Kurki (Ismo Kurki).

A large part of the attempts to illegally cross the border at the moment have already suppressed on the Russian side.

“Detentions are an indication that cooperation with Russia is working, but it certainly does not reduce the need of control on our part. The current system also aims at preventing possible attempts of illegal crossing of the border,” — said the head of the border service of South-Eastern Finland, Tirkkonen Tomi (Tomi Tirkkonen).

Established mutual exchange of observations in the border areas and comprehensive assistance in the investigation. Almost daily there is an exchange of information.

Throughout the 30-kilometer border of South-Eastern Finland organized by strict technical control, installed motion sensors and cameras. In addition, there is mobile surveillance device, the location of which can be changed on the basis of intelligence analysis and possible risks.

Risk analysis allows to identify the place where you can expect crossing the border. For example, the trespassers began using smartphones to share cards on social networks.

Technical control increase mobile units. On the area using dogs that smell good the next person.

“Modern technology plays an important role, but, in addition, important support of the local population. The residents of the border areas immediately informed us of their observations,” — said the head of service of border guard of Southeast Finland, the Colonel ismo Kurki.

In the monitoring of places of illegal crossing of the border is the most important information about the crimes. Use it to find the risk groups, which is receiving special attention.

“Sentry cannot be replaced. Already several words of an experienced border guard may not understand that crossing the border should be subjected to greater scrutiny”.