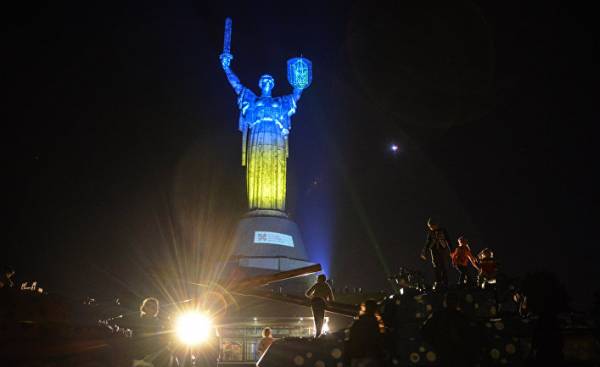 Ukrainian realities this week give a clear reason to believe as is already evident:

1. When people can not, can not or do not want to organize his life, he begins to feel the life of another person. So the government and authorities are beginning to feel the fate of other countries, trying to live their life. In this in Ukraine, demonstrate remarkable persistence and consistency.

The latest example: with the first fixation failures in computer systems from the top sounded peremptorily and categorical statements about the “Russian trace”. No evidence of verbal itching obvious. Does not matter that this hacker attack affected the world, including Russia. In Ukraine the responsible person its mission “fulfilled” once the shifting of responsibility for its failure on the “eternal enemy”. And if it were not Russia, who would have assigned blame? Everyone but yourself.

2. Authorities loudly celebrated the Day of Constitution of Ukraine. And once again, determining its leitmotif was the need for another audit of the Basic Law, the adoption almost a new Constitution. Of course, through the prism of their perspectives, the political moment and its place in power. Of course, on the first cast.

Consequently, the second “Ukrainian rule” is that when they come to power, they act in the direction of adjustment of the Constitution by itself, and when complete cadence, insist on the need to live according to European rules. That is, if it’s not for me no limited powers, that anyone.

And no one, I repeat — no one authorized to perform state functions even said a word, and how the Constitution works, why not carry out its basic provisions, and why and on what grounds is a total, sanctified from above, the attack on basic human rights, pointedly taking steps to cancel the core constitutional obligations of the state. For example, in pension provision in the areas of education and health, etc.

Why? The response basically can be one is to blame no one. Is that again on the Northern neighbor. “Sell” is difficult. Therefore, it is necessary to divert attention, to call for the process.

Volodymyr Mykhailovych Lytvyn is a Ukrainian politician, the leader of the national party.